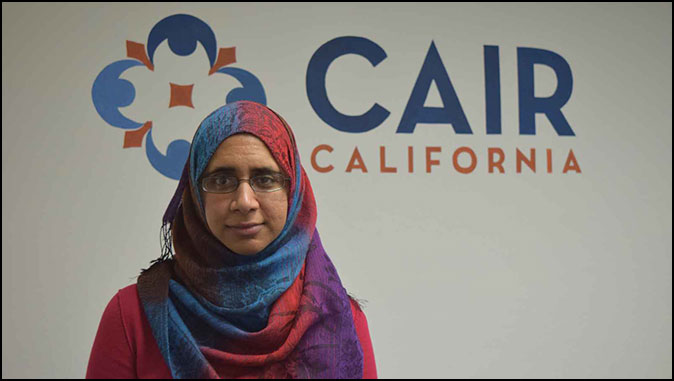 The Jew-Hate of ‘American Muslims for Palestine’
Welcome to CAIR’s Zahra Billoo – and her anti-Semitic bigotry and hate speech.
By Joseph Puder

The American Muslims for Palestine (AMP) convention in Chicago on November 25-27, 2021 with the slogan titled “On the Road to Free Palestine,” was a clear exhibition of unbridled antisemitism in the guise of anti-Zionism. In advertising the conference the organizers wrote, “(We) will uplift and celebrate all of the Palestinian rights success stories that have occurred since our last time gathering, even as we mourn the Palestinians killed in the latest Israeli massacre in May, and to fight against the colonial expansion emptying our homes and filling them with colonizers in East Jerusalem and all of Palestine.”

Aside from the antisemitism so amply displayed in the AMP’s convention speeches, the lies and distortions of verifiable facts on its website are simply astounding. The fact that the AMP and its Council on American Islamic Relations (CAIR) speakers at the convention implored the attendees not to associate with any Jewish organization in interfaith or community settings is a perfect example of intolerance, bigotry, racism, and antisemitism to boot. Apparently, the AMP is fearful that their fellow Muslim audiences might be swayed by the true facts of events in the Middle East. Nihad Awad’s speech, CAIR’s executive director, presents a false and particularly racist portrayal of the Jewish people and money as the source of a so-called “Islamophobic network” out to victimize Muslims. His claim remarkably mirrors the Nazi claim of German victimization at the hands of moneyed Jews.

It has been said that “the best defense is an aggressive offense.” Whenever facts are being presented that implicate Muslims, the AMP and its fellow travelers resort to the charge of Islamophobia. The AMP and CAIR deny the fact that Hamas and Palestinian Islamic Jihad (PIJ) are terrorist organizations, which they support. They distort the fact that Muslim terrorists perpetrated the most heinous terror attack on American soil known as 9/11. They obfuscate the fact that the Islamic State or ISIS, in the name of Islam practiced ethnic cleansing against the Yazidi minority and Christians in Iraq. Of course, not all or even most Muslims are terrorists or racists, but it puts a serious question mark on the ideology and raison d’être of organizations such as AMP and CAIR who support Hamas and PIJ, whose reasons for being are the destruction of the Jewish state and its people. Their objective is the ethnic cleansing of the Jews in Israel.

The AMP and CAIR are unlikely to inform their constituents that Hamas and PIJ in the Gaza Strip attacked Israeli population centers unprovoked, with over 4,000 missiles, aiming to kill innocent Israeli civilians. The AMP, to inflame its supporters used the libelous lie of a “massacre in Gaza,” which goes against any norm of factual truth. Although attacked by Hamas and the PIJ, the Israel Defense Forces (IDF), more than any other army, took extraordinary caution not to hit innocent civilians. It dropped leaflets to warn Gaza civilians of an impending attack thus endangering its own soldiers. The IDF specifically targeted Hamas and PIJ operatives, seeking to avoid collateral damage and civilian casualties. Hamas and PIJ on the other hand used Palestinian civilians as “human shields,” which accounted for civilian casualties in last May’s war in Gaza. Moreover, Hamas and PIJ misfired rockets in the Gaza Strip, killing numerous Palestinian civilians. The BBC-News (August 12, 2021) reported that “More than 4,360 unguided rockets and mortars were fired (by Hamas), killing 13 people there (in Israel). Some fell short killing Palestinians in Gaza.”

The equally false and libelous charge by the AMP of “colonizing east Jerusalem and Palestine” is another distortion of reality. The AMP conveniently ignores the UN Partition Plan of November 1947 that ended the British Mandate in Palestine. It gave the Palestinians the opportunity for statehood and self-determination. The Arab-Palestinians rejected it and chose instead, along with five Arab armies, to annihilate the nascent Jewish state which accepted the Partition Plan. The Sheikh Jarrah neighborhood in eastern Jerusalem, which created controversy, was built by Jews. In 1948, when the Arab Legion conquered eastern Jerusalem, they expelled its Jewish residents from Sheikh Jarrah, and settled the homes with Palestinian refugees. In 1967, following the liberation of Jerusalem, the Jewish owners sought to return to their forcibly abandoned homes or sue for compensation. The Palestinian residents refused to pay rent, and the Israeli Supreme Court ruled in favor of the Jewish owners but declined to order the eviction of the Palestinian dwellers. That is justice, not colonialism. The AMP’s incitement against Jews is reminiscent of Haj Amin al-Husseini, the Mufti of Jerusalem and Hitler’s ally. In the 1920’s and 1930’s he falsely charged that the Jews aimed to take over the al-Aqsa mosque.

Back at the AMP Chicago convention, Zahra Billoo, the American-Muslim activist and executive director of CAIR in San Francisco, presented her classical antisemitic incitement. She warned the attendees to “focus not only on the extreme right-wing forces, but also on ‘polite Zionists’, including the Anti-Defamation League (ADL), Jewish Federations, Hillel, and ‘Zionist synagogues.’” Billoo asserted that “when we talk about Islamophobia, we think sometimes about the vehement fascists, but I also want us to pay attention to the polite Zionists. The ones that say ‘let us break bread together.’” She then added, “They are not your friends.”

To further incite the crowd, Billoo invoked the falsehood used by left-wing activist groups that, “police officers in the US who kill unarmed black men, women, and children are trained by the Israeli military.” In her speech, Billoo stressed the point that she does not support the two-state solution to the Israeli-Palestinian conflict, and claimed that “Allah promised us victory.” In 2016, after Donald Trump was elected president, Billoo posted on Facebook, “He is going to do to you Muslims what Hitler did to the Jews.” According to the Canary Mission, Zahra Billoo is a supporter of Farrakhan and the Nation of Islam, the BDS movement, and Students for Justice in Palestine (SJP). She defended as an attorney terror financiers including Iran’s proxies Hamas and Hezbollah, and she equated the IDF with ISIS and Nazi Germany. In her demonization of American Jewish institutions, she compared the ADL to Hamas.

On February 18, 2015, Billoo tweeted, “I am more afraid of racist Zionists who support apartheid Israel than of the mentally ill young people the FBI recruits to join ISIS.” In other words, the antisemitic and racist Billoo is afraid of Zionism – the Jewish national liberation movement, but not afraid of the vile murderous and jihadist ISIS, which committed near genocide on the Yazidi people in northern Iraq. Furthermore, she has maligned the FBI as recruiting Muslims for ISIS, which in itself is a libelous and vicious lie.

It is clear that Zahra Billoo, CAIR, and the AMP are employing the racist Nazi propaganda, using Joseph Goebbels infamous dictum, “If you tell a lie long enough and keep repeating it, people will eventually come to believe it.” AMP, Billoo, and CAIR, much like the Nazis, are preaching against association with Zionist Jews. Since most Jews are Zionist, their message is clearly anti-Jewish. But more than that, Billoo’s characterization of the “polite Jew” is essentially the same as the Nazi depiction of the “deceptive and dirty Jew.” Numerous Jewish groups seek to share warm and friendly relations with all faiths, including Muslims, based on equality, true mutual recognition, and acceptance. Only then is global interfaith peace possible.

Why Was Texas Synagogue Jihadi Allowed Into U.S. Two Weeks Ago Despite ‘Long Criminal Record’?

Why Was Texas Synagogue Jihadi Allowed Into U.S. Two Weeks Ago Despite ‘Long Criminal Record’?…

Forgetting Jihad The Boulder massacre took place less than a year ago. Why is it…