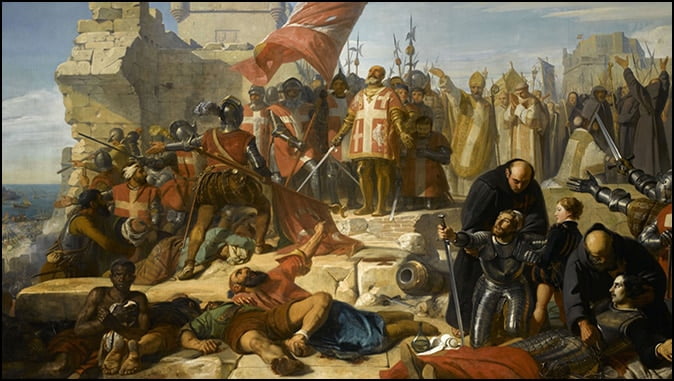 Today in history, May 18, 1565, one of the most symbolically important military encounters between Islam and Europe began: the Ottoman Turks besieged the tiny island of Malta, in what was then considered the heaviest bombardment any locale had been subjected to.

Around the start of the sixteenth century, Muslim pirates from Algiers began to terrorize the Christian Mediterranean. Like their terrestrial counterparts, they too were indoctrinated in and emboldened by Muhammad’s promises: “A campaign by sea is like ten campaigns by land,” the prophet had said, “and he who loses his bearings at sea is like one who sheds his blood in the path of Allah”—that is, he is rewarded either in the here or hereafter. The piratical lust for booty was, accordingly, heightened by dreams of “martyrdom.”

When Suleiman “the Magnificent”—better known among Muslims as Suleiman “the Ghazi” (jihadi/raider)—became Ottoman sultan in 1520, he instantly took the most notorious of these Barbary pirates, Khair al-Din Barbarossa, into his service and helped him prosecute the sea jihad on Europe. The ensuing reign of terror forced Europeans along the Mediterranean coast to relive the days of their ancestors in the centuries before the Crusades, when the Middle Sea was first inundated with jihad and slave raiding. Over the following two decades, hundreds of thousands of Europeans were enslaved, so that, by 1541, “Algiers teemed with Christian captives, and it became a common saying that a Christian slave was scarce a fair barter for an onion.”

Despite the seaborne jihad’s successes, “You will do no good,” a seasoned corsair counseled Suleiman, “until you have smoked out this nest of vipers.” He was referring to the Knights Hospitaller, who came into being soon after the First Crusade (c.1099) and were now known as the Knights of Saint John, headquartered in Malta. Suleiman had evicted them from Rhodes in 1522—whence for two hundred years they had frustrated all Ottoman naval attempts—and Holy Roman Emperor Charles V had bequeathed the island of Malta to the homeless Hospitallers in 1530. They were the emperor’s response to the sultan’s corsairs—and, for more than three decades, a thorn in Suleiman’s side.

In March 1565, after having finally decided to eliminate this “headquarters of infidels,” Suleiman dispatched one of the largest fleets ever assembled—carrying some thirty thousand Ottomans—to take the tiny island, which had a total fighting population of eight thousand. Pope Pius IV implored the kings of Europe to Malta’s aid, to no avail: the king of Spain “has withdrawn into the woods,” complained the pope, “and France, England and Scotland [are] ruled by women and boys.” Only the viceroy of neighboring Sicily responded, but he needed time to raise recruits.

Jean Parisot de Valette (1494–1568), the Grand Master of the Knights—“his disposition is rather sad,” but “for his age [seventy-one], he is very robust” and “very devout”—made preparations for the forthcoming siege, including by explaining to his men what was at stake: “A formidable army composed of audacious barbarians is descending on this island,” he warned; “these persons, my brothers, are the enemies of Jesus Christ. Today it is a question of the defense of our Faith as to whether the book of the Evangelist [the Gospel] is to be superseded by that of the Koran? God on this occasion demands of us our lives, already vowed to His service. Happy will those be who first consummate this sacrifice.”

On May 18, the Ottomans commenced nonstop bombardment, first targeting St. Elmo, one of Malta’s key forts. “With the roar of the artillery and the arquebuses, the hair-raising screams, the smoke and fire and flame,” a chronicler wrote, “it seemed that the whole world was at the point of exploding.” The vastly outnumbered and soon wearied defenders, who were ordered to “fight bravely and sell their lives to the barbarians as dearly as possible,” did just that; and for every Christian killed defending the fort, numerous Muslim besiegers fell. After withstanding all that the Ottomans could throw against it for more than a month, on June 23, St. Elmo, by now a heap of rubble, was finally stormed and captured.

Virtually all 1,500 defenders were slaughtered. The same grisly fate Salah al-Din (Saladin) had centuries earlier consigned to Islam’s staunchest enemies—the Knights Templars and Hospitallers at the disastrous Battle of Hattin (1187)—was now meted out to their heirs. The Knights of Saint John “were hung upside down from iron rings…and had their heads split, their chests open, and their hearts torn out.” Ottoman commander Mustafa ordered their mutilated corpses (along with one Maltese priest) nailed to wooden crosses and set adrift in the Grand Harbor in order to deride and demoralize the onlooking defenders.

It failed: the seventy-one-year-old Valette delivered a thundering and defiant speech before the huddled Christians, beheaded all Muslim prisoners, and fired their heads from cannon at the Turkish besiegers. The Ottomans proceeded to subject the rest of the island to, at that time, history’s most sustained bombardment (some 130,000 cannonballs were fired in total). “I don’t know if the image of hell can describe the appalling battle,” wrote a contemporary: “the fire, the heat, the continuous flames from the flamethrowers and fire hoops; the thick smoke, the stench, the disemboweled and mutilated corpses, the clash of arms, the groans, shouts, and cries, the roar of the guns…men wounding, killing, scrabbling, throwing one another back, falling and firing.”

Although the rest of the forts were reduced to rubble, much Muslim blood was spilled for each inch gained; for “when they got within arms’ reach the scimitar was no match for the long two-handed sword of the Christians.” Desperate fighting spilled into the streets, where even Maltese women and children participated.

It was now late August and the island was still not taken; that, and mass casualties led to mass demoralization in the Ottoman camp. Embarrassed talk of lifting the siege had already begun when Sicily’s viceroy Garcia de Toledo finally arrived with nearly ten thousand soldiers at St. Paul’s Bay. There, where the apostle was once shipwrecked, the final scene of this Armageddon played out as the fresh newcomers routed the retreating Ottomans, who finally fled on September 11—a day which, wittingly or unwittingly, would be avenged by the jihadi “descendants” of the Ottomans in 2001.

“So great was the stench in the bay,” which was awash with countless bloated Muslim corpses, “that no man could go near it.” As many as twenty thousand Ottomans and five thousand defenders died. After forty years of successful campaigning against Europe, Suleiman finally suffered his first major defeat. One year later he succumbed to death, aged seventy-one.

More importantly for Europe, a chink in the Ottoman armor was first perceived thanks to Malta’s spirited resistance; it showed that a tiny but dedicated force could hold out against what was till then deemed an unstoppable Ottoman war machine.

Accordingly, when in 1570 Ottoman forces invaded the island of Cyprus, the pope easily managed to form a “Holy League” of maritime Catholic nation-states, spearheaded by the Spanish Empire, in 1571. To everyone’s dismay—Christian and Muslim—the Holy League prevailed at the battle of Lepanto. As Miguel Cervantes, who was at the naval clash, has the colorful Don Quixote say: “That day…was so happy for Christendom, because all the world learned how mistaken it had been in believing that the Turks were invincible by sea.”

But that sentiment was first realized six years earlier, by the heroic defense of Malta—when the tide of war between Islam and Europe first turned to the latter’s favor.

The above account was excerpted from the author’s book, Sword and Scimitar: Fourteen Centuries of War between Islam and the West. Raymond Ibrahim is a Shillman Fellow at the David Horowitz Freedom Center; a Judith Rosen Friedman Fellow at the Middle East Forum; and a Distinguished Senior Fellow at the Gatestone Institute.

“Isa” From the Qur’an Is NOT Jesus Christ From the Bible By Geri Ungurean Months ago,…

Relax: The London Bridge Jihad Murderer Was “Deradicalized" The process upon which the West has…

Muslim Deceit and the Burden of Proof

Muslim Deceit and the Burden of Proof If Islam permits deceit, why should non-Muslims let…