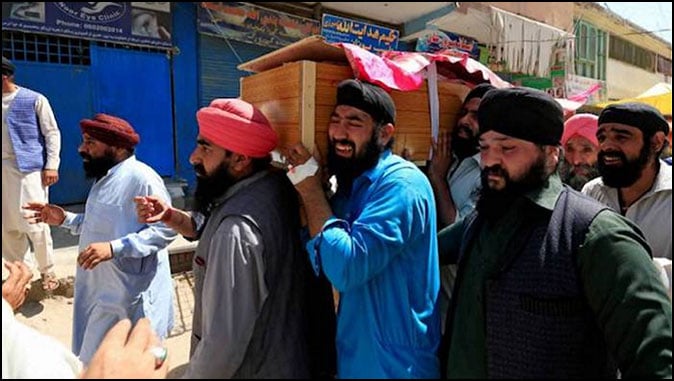 The Horrifying Conditions For Sikhs in Muslim Countries
Attacked, abducted, discriminated against – and dying out.
By Krishna Priya

Attempting to build alliances in their war against Hindutva, Islamists in India can now be seen wooing the Sikh community. However, the lesser-known chapters of history and the horrifying condition of Sikhs in Islamic countries such as Pakistan and Afghanistan establish that those who are chasing the dream of bringing the world under the flag of their Islamic faith have no tolerance for people of any other religion.

Centuries ago, Islamic invaders in India martyred the revered Sikh gurus in unspeakable and disturbing ways. Guru Arjan Dev Ji, the fifth of the ten Sikh gurus, was executed by Jahangir in 1606 CE for refusing to embrace Islam.

Two generations later, the brave Guru Tegh Bahadur Ji was arrested by Aurangzeb’s forces for confronting the religious persecution of Kashmiri Hindus by the Mughal emperor. His three associates, Bhai Mati Das, Bhai Dayal Das, and Bhai Sati Das, were jailed as well. They were tortured in prison and told to abandon their faith and accept Islam. But true to their commitment, withstanding all torments, they refused to convert. Frustrated with their determination, all three were executed by the Mughal administration. Bhai Mato Das was sawed into two halves, Bhai Dayal Das was boiled in a large iron pot, and Bhai Sati Das was rolled up in sheets of cotton and burned alive. Even these grotesque slaughters of his associates couldn’t move Guru Tegh Bahadur Ji from his convictions. Tired of this, Aurangzeb ordered his execution by beheading in public.

Students in India were denied knowledge of these crucial episodes in history. Instead, they were forced to study history crafted by leftist propagandists who dexterously crafted chapters venerating these Islamic invaders.

The oppression of the Sikhs at the hands of Muslims continues to be common in South Asian countries with a Muslim majority. Muslims in countries such as Afghanistan and Pakistan frequently exert pressure on the Sikhs to convert to Islam, destroy their properties, seize their homes and businesses, and abduct their women. Their places of worship are attacked practically every time a group of Muslims are having a bad day. These instances are often swept under the carpet by the Muslim-sympathizing leftist establishment that casts a strong influence over the international media.

Sikhs are a dwindling community in Afghanistan, with their population now standing at less than 700. Twenty-five Sikh devotees, including a child, were killed and eight were wounded when ISIS jihad suicide bombers decided to attack the Gurdwara Har Rai Sahib, a Sikh shrine in Kabul in March 2020. “We are no longer able to stay here,” said a man who lost seven relatives in the Gurdwara attack. Sikhs were also targeted and killed in the 2018 ISIS jihad attack in the city of Jalalabad. Members of this declining community complain of the deep-rooted discrimination they have endured in that Muslim society. This unbearable discrimination has now forced many of them to escape the country of their birth and turn to India.

This anti-Sikh sentiment is often found in neighbouring Pakistan as well. Unlike in Afghanistan, the Sikh community in Pakistan has not been driven to the point of extinction. However, their living conditions are no better, nor are the threats to their existence any less frequent in the Islamic Republic of Pakistan.

19-year-old Jagjit Kaur’s abduction made headlines in Pakistan and its neighbouring countries after the resident of Sail Muhalla Balila, Nankana Sahib, about 50 kilometres from Lahore, went missing in 2019. Her family alleged that six people from a Muslim family barged into their house on August 28, 2020 and kidnapped her. They feared that their daughter would be converted to Islam and married off to a Muslim man.

Later, in a statement given in court, Jagjit stated that she had willingly converted to Islam, adopted the name of Ayesha, and contracted marriage with Muhammad Hassan. Jagjit’s family, however, maintains that this was a case of forced conversion.

In September 2020, a 17-year-old daughter of a Granthi of Gurdwara Panja Sahib, Pritam Singh, was abducted by two Muslim men. The family was worried that she would be put through the same cycle of events as Jagjit the previous year.

Another way Muslims terrorise the Sikh community is by carrying out random killings of men from this community. 25-year-old Ravinder Singh was murdered in Peshawar, Pakistan while he was shopping for his marriage. This allegedly targeted attack came close on the heels of a Muslim mob’s attack on the Sikh shrine Nankana Sahib, which is situated just 60 miles from Lahore. This enraged Muslim mob was led by Mohammad Imran, the brother of Mohammad Hassan, whom the abducted Jagjit Kaur had married “consensually” a couple of months before.

Many other similar dismaying instances are playing out every day in the Muslim-dominated environs of India. Secular entities of the world sinfully downplay these incidents when they can’t deny them. And then they unanimously oppose the Citizenship Amendment Act (CAA), a benevolent step taken by the Indian government to save these minorities from incessant jihad attacks.