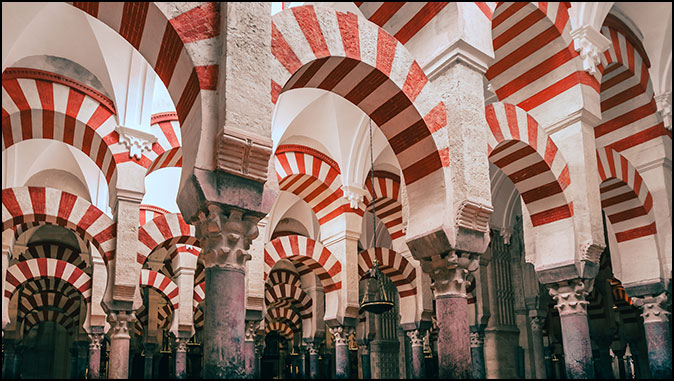 The Greatest Example of Muslim Deceit (Taqiyya) in Western History
And one Muslim ruler is twisting it around to demand “reparations” from Spain.
By Raymond Ibrahim

Recently we learned that Sheikh Dr. Sultan bin Muhammad al-Qasimi, member of the Supreme Council of the UAE and ruler of Sharjah, called for the transformation of the Cathedral of Cordoba back to the Mosque of Cordoba, since Spain’s Christians “don’t deserve it.”

What we weren’t told is what occasioned him to say this—the all-important context of his demand—namely, his new book, The Inquisition (original Arabic here). Devoted to showing how the Spanish Inquisition abused Muslims, al-Qasimi apparently believes it makes a strong case for Spain to turn the cathedral into a mosque, as a form of “reparation.”

During an Arabic language satellite program discussing his new book, he said:

Allah willing, this book will have an impact; and here we demand at least the return of the mosque of Cordoba to us. I’ve demanded this before, and they informed me that the municipality had given it to the church. So I said to them, “The one who doesn’t own gave to the one who doesn’t deserve.” For this is our possession as Muslims; moreover, its return is easy and near, Allah willing.

In other words, and because his book makes the argument that Spain abused its Muslims in extreme ways—including by forcing them to convert to Christianity against their will—the least it can do now is forfeit the cathedral to Islam.

However, just as the sheikh ignores the fact that, “not only was the mosque [of Cordoba] built on a Christian site, but it was also built using materials from the sixth century Christian building destroyed by Muslims in the ninth century,” so too does he ignore why Spain subjected the Muslims to an inquisition in the first place.

In 1492, the Reconquista came to a close with Granada’s surrender. Instead of migrating to North Africa—whence most of its jihadi allies, namely the Almoravids and Almohads, had hailed—its nearly half-million Muslim population chose to remain. They were initially granted lenient terms, including the right to travel abroad and practice Islam freely. However, whenever the opportunity arose, they launched many hard-to-quell uprisings—several “involving the stoning, dismembering, beheading, impaling, and burning alive of Christians”—and regularly colluded with foreign Muslim powers (e.g., Ottoman Turks) in an effort to subvert Spain back to Islam.

A final “Muslim uprising in 1499, and the crushing of this revolt in 1501, led to an edict that Muslims had to convert to Christianity or leave the peninsula.” Contrary to popular belief, the motivation was less religious and more political; it was less about making Muslims “good Christians” and more about making them “good citizens.” So long as they remained Muslim, thereby operating under the highly divisive doctrine of “loyalty and enmity,” they would remain hostile and disloyal to Christian Spain; and because secularism, atheism, multiculturalism, or just general “wokeness,” were not options then, the only practical way Muslims could slough off their tribalism and fully participate in a Christian kingdom was by embracing its faith.

Under such circumstances, sharia is clear: Muslims should try to emigrate. But there has always been one important caveat: whenever Muslims find themselves under infidel authority, they may say and do almost anything—denounce Muhammad, receive baptism and communion, venerate the cross, all anathema to Islam—so long as their hearts remain true to Islam.

Such is the doctrine of taqiyya, which has traditionally defined Islam’s modus operandi under non-Muslim authority. Even before the Reconquista in Spain, “Sunni Muslims had invoked taqiyya to justify dissimulation under Christian domination in other periods and regions, including Sicily after the Norman conquest in 1061–91 and the Byzantine Marches.” Unsurprisingly, then, taqiyya defined Islam in post-Reconquista Spain; one authority refers to a 1504 fatwa urging Spain’s subject Muslims to employ taqiyya as “the key theological document for the study of Spanish Islam.”

Once the edict to convert or emigrate appeared, virtually the entire Granadan population—hundreds of thousands of Muslims—openly embraced Christianity but remained crypto-Muslims. Publicly they went to church and baptized their children; at home they recited the Koran, preached undying hate for the infidel and their obligation to liberate al-Andalus.

That these “Moriscos”—that is, self-professed Muslim converts to Christianity who were still “Moorish,” or Islamic—went to great lengths to foist their deception cannot be doubted, as explained by one historian:

For a Morisco to pass as a good Christian took more than a simple statement to that effect. It required a sustained performance involving hundreds of individual statements and actions of different types, many of which might have little to do with expressions of belief or ritual per se. Dissimulation [taqiyya] was an institutionalized practice in Morisco communities that involved regular patterns of behaviour passed on from one generation to the next.

Despite this elaborate masquerade, Christians increasingly caught on: “With the permission and license that their accursed sect accorded them,” a frustrated Spaniard remarked, “they could feign any religion outwardly and without sinning, as long as they kept their hearts nevertheless devoted to their false impostor of a prophet. We saw so many of them who died while worshipping the Cross and speaking well of our Catholic Religion yet who were inwardly excellent Muslims.”

Christians initially tried to reason with the Moriscos; they reminded them how they became Muslim in the first place: “Your ancestor was a Christian, although he made himself a Muslim” to avoid persecution or elevate his social status; so now “you also must become a Christian.” When that failed, Korans were confiscated and burned; then Arabic, the language of Islam, was banned. When that too failed, more extreme measures were taken; it reached the point that a Morisco could “not even possess a pocketknife for eating with that did not have a rounded point, lest he savage a Christian with it.”

A Muslim chronicler summarizes these times: “Such of the Muslims as still remained in Andalus, although Christians in appearance, were not so in their hearts; for they worshipped Allah in secret. . . . The Christians watched over them with the greatest vigilance, and many were discovered and burnt.”

Such are the origins of the Spanish Inquisition (which, contrary to popular belief, targeted many more Muslims than Jews). For no matter how much the Moriscos “might present the appearance of a most peaceful submission,” a nineteenth century historian wrote, “they remained nevertheless fundamental Musulmans, watching for a favourable opportunity and patiently awaiting the hour of revenge, promised by their prophecies.”

Thus, when a rumor arose in 1568 that the Ottoman Turks had finally come to liberate them, formerly “moderate” Muslims near Granada, “believing that the days under Christian rule were over, went berserk. Priests all over the countryside were attacked, mutilated, or murdered; some were burned alive; one was sewed inside a pig and barbequed; the pretty Christian girls were assiduously raped, some sent off to join the harems of Moroccan and Algerian potentates.”

In the end, if Muslims could never be loyal to infidel authority— constantly colluding and subverting, including with foreign Muslims—and if conversion to Christianity was no solution due to the dispensation of taqiyya, then only one solution remained: between 1609 and 1614, all Moriscos were expelled from the Peninsula to Africa, whence Islam had first invaded Spain nearly a millennium earlier.

This, of course, is a fuller explanation as to why Spain’s Muslims were subjected to the inquisition than al-Qasimi is willing to give, for obvious reasons: dissembling and ever subversive Muslims (past or present) do not garner much sympathy—certainly not for Spain to start making concessions.

He also seems to miss the great irony: at least the Spaniards were liberating their own country, and giving those whose ancestors had invaded the opportunity to leave unmolested. This is far more lenient than how Islam has always behaved—invading non-Muslim nations and giving infidels three choices: convert, live as subjugated dhimmis, or die—as the learned sheikh knows full well.

Note: Quotations in the above narrative were excerpted from and documented in Ibrahim’s, Sword and Scimitar: Fourteen Centuries of War between Islam and the West.

Usul al-Fiqh: The (Misunderstood) Key to Islamic Fanaticism A linguistic distortion of an Arabic term…