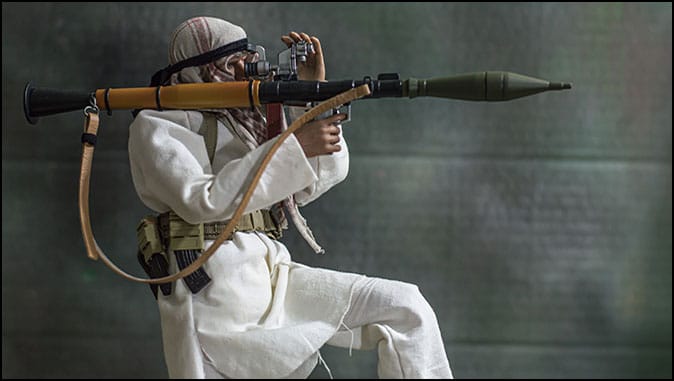 The Eternal Jihad
Understanding what really happened in Afghanistan.
By Raymond Ibrahim

Raymond Ibrahim, author of Sword and Scimitar, is a Shillman Fellow at the David Horowitz Freedom Center.

Although August 15, 2021 will forever live in infamy as the date when the Taliban reconquered Afghanistan, for over 13 centuries that date was famous for another event — Constantinople’s defeat of the caliphate, August 15, 718. While these two events separated by exactly 1,303 years are vastly different in nature — not least that in 718 Islam lost, while in 2021 it won — they both confirm one irresistible point that the confident West should take to heart: the tenacity of Islamic jihad — this relentless snake of war that always bides its time, even if by remaining coiled for many centuries, before striking.

Consider the first event. In 718, the Eastern Roman Empire (“Byzantium”) repulsed, in dramatic fashion, the Arabs. It was such a spectacular victory, and Muslim losses were so bad, that, for many centuries, the caliphates never dared make another attempt against the walls of Constantinople.

Put differently, for many centuries after the year 718, anyone living in Constantinople would have thought — and would have apparently been justified for thinking — that the Islamic threat, whatever it was elsewhere, was well behind them.

And yet, in the early 1400s — 700 years after the people of Constantinople had thought they’d seen the last of jihad — it was back again besieging them, with the city finally falling to Islam on May 29, 1453.

On the surface there is no connection or continuity between those who in the eighth century tried to conquer, and those who in the fifteenth century did conquer, Constantinople — except, of course, for one thing: both were Muslims, and both articulated their hostility for and need to conquer Constantinople in distinctly jihadist terms: like every other infidel, the Christian kingdom had two choices before it: submit to Islam — which it rejected — or fight.

Thus, while the jihad was down in the eighth century, it was never out for the final count. It bided its time, even as empires rose and fell, and finally manifested itself again in the guise of the latest newcomers to the stage of world conquest, the Turks (who, even more ironically, were greater devotees and practitioners of jihad than even their Arab predecessors).

Seen this way, Constantinople’s mortal enemy was never really the Arabs or Turks; it was Islam, which, while experiencing highs and lows in the intervening centuries, still transformed its adherents, first Arabs then Turks, into existential enemies devoted to the slaughter and subjugation of infidels, whenever possible.

Now consider how this “ancient” and “distant” history applies to recent events. At the height of U.S. victory in Afghanistan in 2005, when both al-Qaeda and the Taliban had been all but rooted out, Ayman al-Zawahiri (current leader of al-Qaeda) was asked about the statuses of those two organizations’ leaders, who were missing in action. His response, which follows, has, in the aftermath of August 15, 2021, proven true:

Jihad in the path of Allah is greater than any individual or organization. It is a struggle between Truth and Falsehood, until Allah Almighty inherits the earth and those who live in it. Mullah Muhammad Omar and Sheikh Osama bin Laden—may Allah protect them from all evil—are merely two soldiers of Islam in the journey of jihad, while the struggle between Truth [Islam] and Falsehood [non-Islam] transcends time (Al Qaeda Reader, p.182; emphasis added).

One day mujahedeen will have victory and Islamic law will come not just to Afghanistan, but all over the world. We are not in a hurry. We believe it will come one day. Jihad will not end until the last day [emphasis added].

When one considers the state of the world, the current military and economic dominance of the West, and the general weakness of the Muslim world, surely such claims sound laughable. As seen, however, time has a way of switching the tables, making what once seemed impossible imminent.

In short, as long as Islam exists, the jihad may be down but it is never out for the count. It may take years, decades, and centuries; its name and guise may morph and change from eighth century Arab caliphates, to fifteenth century Turkish sultanates, to the twenty-first century’s loose amalgam of ISIS, al-Qaeda, Taliban, Hamas, Hezbollah, Boko Haram, al-Shabaab, etc.—but it is always there, often lying dormant, yes, though ever ready to strike at the first opportunity.

What will it be called, what guise will it take, and what new inroads will it have made in the decades and centuries to come?

New Zealand Police Let a Jihadi Stab Six People They were tracking his every move.…