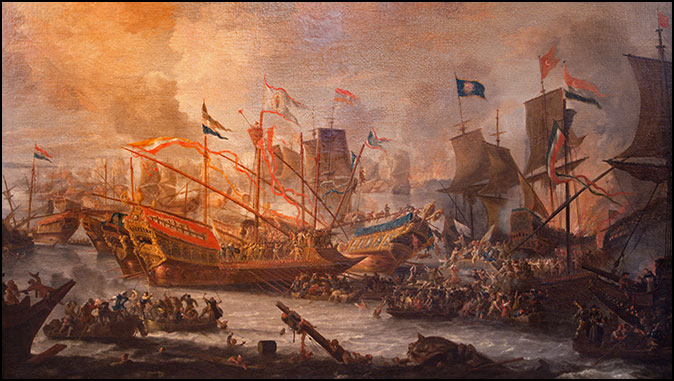 The Battle of Lepanto: When Turks Skinned Christians Alive for Refusing Islam
The anniversary of one of history’s most cataclysmic clashes between Islam and the West
By Raymond Ibrahim

Earlier this week, on October 7, 1571, was the anniversary of one of history’s most cataclysmic clashes between Islam and the West—one where the latter finally crushed and humiliated the former.

In 1570, Muslim Turks—in the guise of the Ottoman Empire—invaded the island of Cyprus, prompting Pope Pius V to call for and form a “Holy League” of maritime Catholic nation-states, spearheaded by the Spanish Empire, in 1571. Before they could reach and relieve Cyprus, its last stronghold at Famagusta was taken through treachery.

After promising the defenders safe passage if they surrendered, Ottoman commander Ali Pasha—known as Müezzinzade (“son of a muezzin”) due to his pious background—had reneged and launched a wholesale slaughter. He ordered the nose and ears of Marco Antonio Bragadin, the fort commander, hacked off. Ali then invited the mutilated infidel to Islam and life: “I am a Christian and thus I want to live and die,” Bragadin responded. “My body is yours. Torture it as you will.”

So he was tied to a chair, repeatedly hoisted up the mast of a galley and dropped into the sea, to taunts: “Look if you can see your fleet, great Christian, if you can see succor coming to Famagusta!” The mutilated and half-drowned man was then carried near to St. Nicholas Church—by now a mosque—and tied to a column, where he was slowly flayed alive. The skin was afterward stuffed with straw, sown back into a macabre effigy of the dead commander, and paraded in mockery before the jeering Muslims.

News of this and other ongoing atrocities and desecrations of churches in Cyprus and Corfu enraged the Holy League as it sailed east. A bloodbath followed when the two opposing fleets—carrying a combined total of 600 ships and 140,000 men, more of both on the Ottoman side—finally met and clashed on October 7, 1571, off the western coast of Greece, near Lepanto. According to one contemporary:

The greater fury of the battle lasted for four hours and was so bloody and horrendous that the sea and the fire seemed as one, many Turkish galleys burning down to the water, and the surface of the sea, red with blood, was covered with Moorish coats, turbans, quivers, arrows, bows, shields, oars, boxes, cases, and other spoils of war, and above all many human bodies, Christians as well as Turkish, some dead, some wounded, some torn apart, and some not yet resigned to their fate struggling in their death agony, their strength ebbing away with the blood flowing from their wounds in such quantity that the sea was entirely coloured by it, but despite all this misery our men were not moved to pity for the enemy…Although they begged for mercy they received instead arquebus shots and pike thrusts.

The pivotal point came when the flagships of the opposing fleets, the Ottoman Sultana and the Christian Real, crashed into and were boarded by one another. Chaos ensued as men everywhere grappled; even the grand admirals were seen in the fray, Ali Pasha firing arrows and Don Juan swinging broadsword and battle-axe, one in each hand.

In the end, “there was an infinite number of dead” on the Real, whereas “an enormous quantity of large turbans, which seemed to be as numerous as the enemy had been, [were seen in the Sultana] rolling on the deck with the heads inside them.” The don emerged alive but the pasha did not.

When the central Turkish fleets saw Ali’s head on a pike in the Sultana and a crucifix where the flag of Islam once fluttered, mass demoralization set in and the waterborne melee was soon over. The Holy League lost twelve galleys and ten thousand men, but the Ottomans lost 230 galleys—117 of which were captured by the Europeans—and thirty thousand men.

It was a victory of the first order, and all of Christendom—Catholic, Orthodox, and Protestant—rejoiced.

Practically speaking, however, little changed. Cyprus was not even liberated by the Holy League. “In wrestling Cyprus from you we have cut off an arm,” the Ottomans painfully reminded the Venetian ambassador a year later. “In defeating our fleet [at Lepanto] you have shaved our beard. An arm once cut off will not grow again, but a shorn beard grows back all the better for the razor.”

Even so, this victory proved that the relentless Turks, who in previous decades and centuries had conquered much of Eastern Europe, could be stopped. Lepanto suggested that the Turks could be defeated in a head-on clash—at least by sea, which of late had been the Islamic powers’ latest hunting grounds. As Miguel Cervantes, who was at the battle, has the colorful Don Quixote say: “That day . . . was so happy for Christendom, because all the world learned how mistaken it had been in believing that the Turks were invincible by sea.”

Modern historians affirm this position. According to military historian Paul K. Davis, “More than a military victory, Lepanto was a moral one. For decades, the Ottoman Turks had terrified Europe, and the victories of Suleiman the Magnificent caused Christian Europe serious concern…. Christians rejoiced at this setback for the Ottomans. The mystique of Ottoman power was tarnished significantly by this battle, and Christian Europe was heartened.”

No matter how spectacular, however, defeat at sea could not shake what was first and foremost a land power—so that more than a century later, in 1683, some 200,000 armed Ottomans had penetrated as far as and besieged Vienna.

But that—to say nothing of Turkey’s many other jihads down to the present—is another story.

Historical quotes in this article were excerpted from the author’s Sword and Scimitar: Fourteen Centuries of War between Islam and the West – a book that CAIR and its Islamist allies did everything they could to prevent the U.S. Army War College from learning about.

The Greatest Example of Muslim Deceit (Taqiyya) in Western History