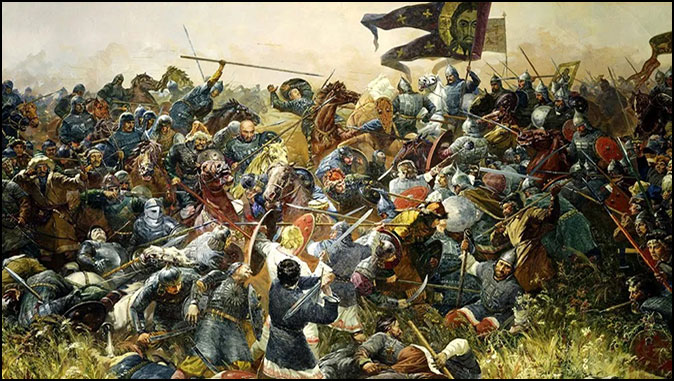 The Battle of Kulikovo
Russian liberation from the Tatar yoke.
By Raymond Ibrahim

Earlier this week in history, on September 8, 1380, Russia began its long march to liberation from the Tatar yoke, by way of a battle that is as important to Russian history as the battles of Tours and Vienna are to the West.

Although pagan when they conquered Russia around 1240, by 1300 the Mongols were thoroughly Islamized. Arabic was adopted, “the entire Muslim religious establishment of qadis, muftis, and the like arose in Sarai, the Golden Horde’s capital on the lower Volga,” and “sharia, Muslim religious law,” reigned supreme. “With this the Russo-Tatar conquest society entered the mainstream of Medieval Christian-Muslim frontier life,” that is, it entered into a familiar paradigm of enmity and war, punctuated only by vast sums of gold and slaves flowing from Russia to the Horde.

In 1327, Uzbek Khan’s cousin Shevkal—“the destroyer of Christianity,” according to a Russian chronicle—asked a boon of his khan: “allow me to go to Rus to destroy their Christian faith, to kill their princes and to bring you their wives and children.” Uzbek consented. At the head of a vast horde, Shevkal invaded Russia “with great haughtiness and violence. He inaugurated great persecution of the Christians, [using] force, pillage, torture, and abuse.” Nor were Russians ignorant of the reason behind their (renewed) sufferings: everywhere in their chronicles “they appear as defenders of the faith battling to save Christianity from marauding infidels driven by religious animosity.” Moreover, “Mongol atrocities” are always recorded “as incidents in a continuous religious war.”

When the Golden Horde’s infrastructure began to fracture from internal discord in 1359, the principality of Moscow (or Muscovy) began to defy its overlords. So Khan Mamai, seeking to squash the rebels and “impose Islam on the Russians,” made for Moscow with, according to sources, some 100,000 Turco-Tatars in 1380. Boasting that they would put their swords “to the test for the Russian land and the Christian faith” against “the armor of the Moslems,” the Russians accepted the challenge.

Under the general leadership of Grand Prince Dmitri Ivanovich of Moscow, some 50,000 Russians went out and met the khan at Kulikovo Field, near the Don River and other tributaries. The opposing armies were so vast as to be spread out over eight miles. The Christians strategically positioned themselves between rivers and dense forests, thereby limiting the Tatar horsemen’s maneuvering and flanking abilities.

“I will neither protect my face nor hide in the rear, but let us all brothers fight together,” Dmitri said in response to his nobles’ pleas to stay out of harm’s way: “I want to die for Christianity ahead of anyone else, with deed as well as word, so that all others who see it will become bold.” (More practically, explained the grand prince, “it is better that we fall in battle than become slaves of these infidels.”)

Once battle commenced on September 8, 1380—640 years ago today—“there was such a great massacre and bitter warfare and great noise, such as there never had been in Russian principalities,” writes the chronicler; “blood flowed like a heavy rain and there were many killed on both sides.” Although outnumbered two-to-one, the Russians, “seek[ing] revenge for Tatar offenses,” fought with a savage fury. True to his word, Dmitri was seen at the front “striking to the right and to the left, killing many; he himself was surrounded by many [Tatars] and was hit many times on his head and his body.”

After hours of fierce fighting and despite heavy casualties, the Russians, with the aid of hidden cavalry that had charged out of the surrounding thick woods, managed to rout the Muslims. And so Grand Prince Dmitri—who, on learning the Mongols had fled, instantly collapsed from heavy loss of blood and nearly died—led the first major Russian victory against their Tatar oppressors since their “yoke” began 150 years earlier. Thus the Battle of Kulikovo shattered the myth of Mongol invincibility and bestowed great honor on Moscow.

Even so, full liberation was still a century away. For in 1382, the regrouped and recovered Tatars invaded Moscow, nearly burning the entire city to the ground and leaving some 24,000 corpses in their wake. But the resilient duchy continued to be the chief Russian thorn in the Horde’s side. By 1409, Emir Edigei was warning Grand Prince Vasily Dmitrivich to stop withholding full payment of jizya—“lest evil befall your domain, and Christians meet their final doom, and our anger and war be upon you!” The warning ignored, Edigei came slaughtering, pillaging, and burning, including in Moscow, though he failed to take it.

For what was done at the Kulikovo Field could not now be undone; over the next few decades, Moscow continued to grow in strength and prestige even as the Horde continued to diminish in both. Finally, in October 1480—precisely one hundred years after Kulikovo—the two armies met at the Ugra River, and “thus ended the Horde tsars,” to quote a chronicler. “Then in our Russian Land we were freed from the burden of submission to the Muslim and began to recover as if from winter to clear spring.”

Note: All quotations in the above account were excerpted from and documented in Ibrahim’s book, Sword and Scimitar: Fourteen Centuries of War between Islam and the West.

The Greatest Example of Muslim Deceit (Taqiyya) in Western History