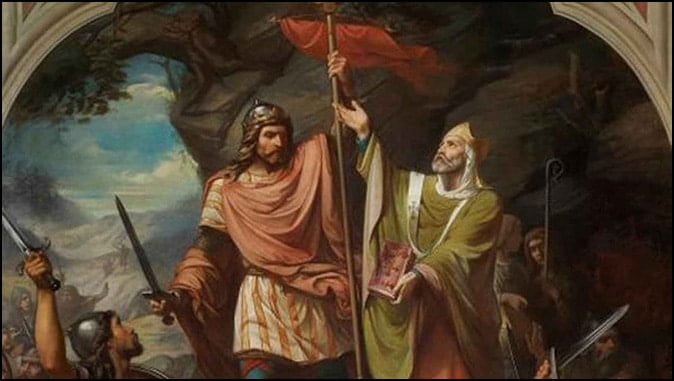 The Battle of Covadonga: A ‘Mustard Seed’ of Liberation Is Planted in Islamic Spain
Nearly thirteen-hundred years ago a profoundly important battle was waged.
By Raymond Ibrahim

Nearly thirteen-hundred years ago yesterday, on May 28, 722,* a little known but profoundly important battle was waged, setting the tone for the next eight hundred years of Christian/Muslim “coexistence” in Spain: the Battle of Covadonga.

Ten years earlier, Arabs and Africans—“Moors,” under the banner of Islam— had “godlessly invaded Spain to destroy it,” to quote from the Chronicle of 754. Once on European soil, they “ruined beautiful cities, burning them with fire; condemned lords and powerful men to the cross; and butchered youths and infants with the sword.”

After meeting and beating Spain’s Visigothic nobles at the Battle of Guadalete — “never was there in the West a more bloody battle than this,” wrote the Muslim chronicler al-Hakam, “for the Muslims did not withdraw their scimitars from them [Christians] for three days” — the invaders continued to penetrate northward into Spain, “not passing a place without reducing it, and getting possession of its wealth, for Allah Almighty had struck with terror the hearts of the infidels.”

Such terrorism was intentionally cultivated, in keeping with the Koran (3:151, 8:12, etc.). For instance, the invaders slaughtered, cooked, and pretended to eat Christian captives, while releasing others who, horrified, fled and “informed the people of Andalus [Spain] that the Muslims feed on human flesh,” thereby “contributing in no small degree to increase the panic of the infidels,” wrote al-Maqqari, another Muslim chronicler.

Contrary to the claim that, seeing Muslim rule was no worse and possibly preferable to Visigothic rule, Spain capitulated easily, even Muslim chroniclers note how “the Christians defended themselves with the utmost vigor and resolution, and great was the havoc that they made in the ranks of the faithful.” In Córdoba, for example, a number of Spaniards holed themselves up in a church. Although “the besieged had no hopes of deliverance, they were so obstinate that when safety was offered to them on condition either of embracing Islam, or paying jizya, they refused to surrender, and the church being set on fire, they all perished in the flames,” wrote al-Maqqari. The ruins of this church became a place of “great veneration” for later generations of Spaniards, because “of the courage and endurance displayed in the cause of their religion by the people who died in it.”

In the end, native Spaniards had two choices: acquiesce to Muslim rule or “flee to the mountains, where they risked hunger and various forms of death.” Pelagius, better known as Pelayo (685–737), a relative of and “sword-bearer” to King Roderick, who survived Guadalete, followed both strategies. After the battle, he retreated north, where Muslim rule was still tenuous; there he eventually consented to become a vassal of Munnuza, a local Muslim chief. Through some “stratagem,” Munnuza “married” Pelayo’s sister — a matter that the sword-bearer “by no means consented to.” Having expressed displeasure at the seizure of his sister, and having ceased paying jizya (tribute), Muslims were sent “to apprehend him treacherously” and bring him back “bound in chains.” Unable to fight the oncoming throng “because they were so numerous,” Pelayo “climbed a mountain” and “joined himself to as many people as he found hastening to assemble.”

There, in the deepest recesses of the Asturian mountains — the only free spot left, in northwest Spain — the assembled Christian fugitives declared Pelayo their new king; and the Kingdom of Asturias was born.

“Hearing this, the king [the Muslim governor of Córdoba], moved by an insane fury, ordered a very large army from all over Spain to go forth” and bring the infidel rebels to heel. The invaders — 180,000 of them, if the chroniclers are to be believed — surrounded Pelayo’s mountain. They sent Oppa, a bishop and/or noble now turned dhimmi, to reason with him at the mouth of a deep cavern: “If when the entire army of the Goths was assembled, it was unable to sustain the attack of the Ishmaelites [at Guadalete], how much better will you be able to defend yourself on this mountaintop? To me it seems difficult. Rather, heed my warning and recall your soul from this decision, so that you may take advantage of many good things and enjoy the partnership of the Chaldeans [Arabs].”

“I will not associate with the Arabs in friendship nor will I submit to their authority,” Pelayo responded. Then the rebel made a prophecy that would be fulfilled over the course of nearly eight centuries: “Have you not read in the divine scriptures that the church of God is compared to a mustard seed and that it will be raised up again through divine mercy? [Mark 4:30-21]”

The dhimmi affirmed that it was so; the fugitive continued: “Christ is our hope that through this little mountain, which you see, the well-being of Spain and the army of the Gothic people will be restored. . . . Now, therefore, trusting in the mercy of Jesus Christ, I despise this multitude and am not afraid of it. As for the battle with which you threaten us, we have for ourselves an advocate in the presence of the Father, that is, the Lord Jesus Christ, who is capable of liberating us from these few.” Discussions were over.

There, at Covadonga — meaning “Cavern of the Lady” — battle commenced on May 28, 722. A shower of rocks rained down on the Muslims in the narrow passes, where their numbers counted for nothing and only caused confusion. Afterward, Pelayo and his band of rebels rushed forth from their caves and hiding places and made great slaughter among them; those who fled the carnage were tracked and mowed down by other, now emboldened, mountaineers. “A decisive blow was dealt at the Moorish power…. The advancing tide of conquest was stemmed. The Spaniards gathered heart and hope in their darkest hour; and the dream of Moslem invincibility was broken.”

Several subsequent Muslim campaigns—jihads—were launched to conquer the Asturian kingdom, and the “Christians of the North scarcely knew the meaning of repose, security, or any of the amenities of life.” Even so, the mustard seed would not perish. “A vital spark was still alive,” Edward Gibbon wrote; “some invincible fugitives preferred a life of poverty and freedom in the Asturian valleys; the hardy mountaineers repulsed the slaves of the caliph.” Moreover, “all who were dissatisfied with Moorish dominion, all who clung to the hope of a Christian revival, all who detested Mahomet,” were drawn to the life of poverty and freedom.”

By the mid eighth century, the “vital spark” had spread to engulf the entire northwest of the Peninsula; over the following centuries, various kingdoms, whose core identity revolved around Christian defiance to Islam—later manifested as the Reconquista—had evolved from this mustard seed. “Covadonga became the symbol of Christian resistance to Islam and a source of inspiration to those who, in words attributed to Pelayo, would achieve the salus Spanie, the salvation of Spain.”

After centuries of brutal warfare, by 1492, the last Muslim-held territory in Spain, Granada, was liberated. And it all came to pass thanks to Pelayo’s Asturian mustard seed, planted nearly eight hundred years earlier at the battle of Covadonga.

Despite this encounter’s importance for Spain—it was regularly celebrated, including in 1918 (at the height of the Spanish Flu) with Spanish monarchs in attendance—it remains virtually unknown in the West, sacrificed on the altar of political correctness and Islamic “golden age” myths.

Note: The above account was excerpted from the author’s book, Sword and Scimitar: Fourteen Centuries of War between Islam and the West.

* Although scholarly consensus currently supports the date of May 28, 722, earlier historians placed the date of the battle in 718.

The False Teaching that Islam is a Religion of Peace Invites Terrorism!

The False Teaching that Islam is a Religion of Peace Invites Terrorism! By Don Boys,…

Sniffer Dogs Suffer for US Willful Ignorance About Islam

Sniffer Dogs Suffer for US Willful Ignorance About Islam Will PETA step in? By Robert…

When and Why the West Began to ‘Demonize’ Muhammad

When and Why the West Began to ‘Demonize’ Muhammad Did Christendom really trigger the conflict?…