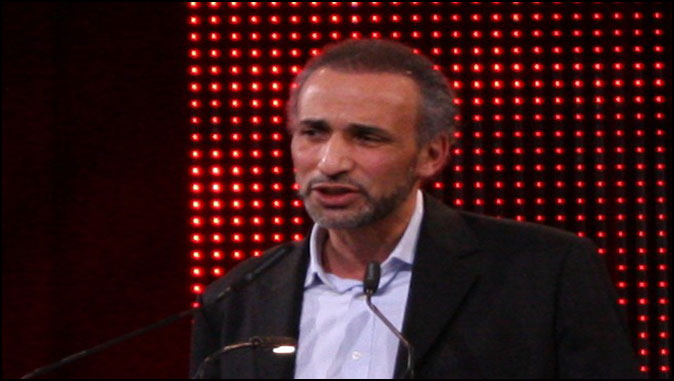 Tariq Ramadan, Accused of Rape by Five Women, to Speak at French Conference
Leftists always stand with their own – no matter what.
By Robert Spencer

Leftists always stand by their friends and allies, while demanding that conservatives denounce any and all of their own who transgress perceived boundaries of acceptable discourse. This will be proven anew on January 21, when Tariq Ramadan, the once-renowned self-proclaimed Muslim reformer who is now under a cloud of rape accusations, speaks in France on The Prophet by Khalil Gibran and The Prince by Niccolo Machiavelli. Accused rapists aren’t usually lionized by the intelligentsia, but for Tariq Ramadan, as has so often been the case during his tumultuous public career, the usual rules just don’t apply.

Once the West’s great hope for Islamic reform, Ramadan has been accused by several women now of violent rapes. In a video he uploaded in December 2019, he acknowledges some nebulous wrongdoing, but then claims that the accusations against him are all an attempt to discredit him, and thereby to “neutralize the Muslims.”

“We have to be clear,” Ramadan said, “that there is discrimination, stigmatization, racism that is at stake in the whole issue.” Of course! What else could multiple rape charges against him possibly be? He goes on: “And I was a symbol. To destroy me meant, let the people understand: If you want to be vocal you have to face the reality. It happened to Tariq Ramadan now, it could happen to anyone in the future.”

Anyone who is allegedly a violent rapist, sure. But RFI reported at the same time that “supporters of Ramadan, who is a professor of contemporary Islamic studies at Oxford’s St. Anthony’s College, have called the accusations against him part of a ‘international Zionist plot’ to blacken his name.”

Ah yes, the Jews. Of course! It couldn’t be that a cosseted Muslim academic, hailed and feted all over Europe and the United States despite the abject vacuity and sinister disingenuousness of his thought, began to indulge his worst impulses, now, could it? He couldn’t have been tempted to do so when it became clear that, in light of his value to Western authorities as a “moderate Muslim” who seemed to prop up their fantasies about the jihad threat, he would be allowed to get away with virtually anything – could he?

“Virtually anything” is actually an understatement. The allegations against Ramadan are particularly revolting; if they are true, he is a monstrous sadist. One of his accusers said he subjected her to “blows to the face and body, forced sodomy, rape with an object and various humiliations, including being dragged by the hair to the bathtub and urinated on.”

His sadism, however, appears to be, if the allegations are true, closely intertwined with his celebrated Islamic piety: another one of his accusers said he told her he was raping her because she didn’t wear a hijab.

He would have gotten away with it all, being just too valuable for the Western political and media elites, if it hadn’t been for the #MeToo movement. The problems arose for Ramadan only in 2017, when that movement began to gather steam and his accusers started to come forward, at which point the great reformer’s statements in response were decidedly unsatisfactory. “His last hearing,” RFI notes, “dates back to 2018 when he stunned the public by admitting to ‘consensual’ sex with his accusers, months after denying he had had no sexual contact with them.”

Since then, Ramadan has claimed to be suffering from multiple sclerosis, and has been freed on bail. Meanwhile, one of his accusers has already been beaten and threatened. It wouldn’t be at all surprising, given his connections to all varieties of powerful people, if Ramadan were cleared of all the charges. If this happens, it would be in keeping with the duplicity that has characterized his entire career. French journalist Caroline Fourest’s illuminating book Brother Tariq: The Doublespeak of Tariq Ramadan concludes that this much-lionized putative “Muslim Martin Luther” is actually anything but a reformer: in reality, Ramadan is “remaining scrupulously faithful to the strategy mapped out by his grandfather, a strategy of advance stage by stage” toward the imposition of Islamic law in the West.

Ramadan, she explains, in his public lectures and writings invests words like “law” and “democracy” with subtle and carefully crafted new definitions, permitting him to engage in “an apparently inoffensive discourse while remaining faithful to an eminently Islamist message and without having to lie overtly — at least not in his eyes.” Ramadan, she said, “may have an influence on young Islamists and constitute a factor of incitement that could lead them to join the partisans of violence.”

Fourest was also the first to reveal, back in 2017, long before these new charges were levied, that Ramadan had at least four other victims besides the first woman who came forward, Henda Ayari. “A request for religious advice turned into a compulsive sexual relationship, sometimes consented to, often violent and very humiliating, before ending in threats.”

Fourest had evidence. “I presented it to a judge. But Tariq Ramadan scared him too much. I am well-placed to know the violence of the networks of the Muslim Brotherhood when one stands up to ‘brother Tariq.’”

Those violent networks may yet prevail. “It was a plot,” Ramadan insists. “It was a political set up. And this could happen to anyone.” The worst part of this duplicitous whining is that there are hordes of deluded Leftists who will fall for it. And now they’re having him speak.

If Tariq Ramadan were a conservative non-Muslim, the rape allegations would have been the end of his career, and he would never be invited to speak anywhere. If he were, there would be a media outcry that would force a cancellation. But Tariq Ramadan is a man of privilege. Things just don’t work that way for him.