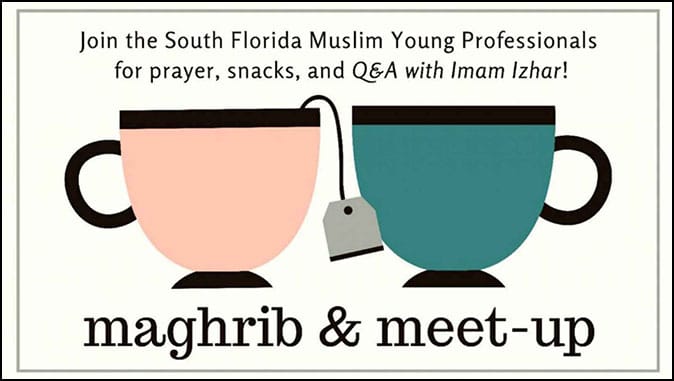 Bringing young people of the opposite sex together for a night of Q&A with an imam – What could be the harm? But it is not just any imam. It is Izhar Khan, the individual who was charged by the FBI, along with members of his family, with helping to finance the Taliban. And the event is not taking place at a mere neutral hangout. It is being hosted by the imam’s mosque, Masjid Jamaat Al-Mumineen, a radical institution that promotes horrific bigotry on its website against Jews, Christians, gays, women and others. Why would these youth pick such a speaker at such a venue? It turns out they have been doing so for a while, and they need to be called out on it.

The South Florida Muslim Young Professionals (SoFloMoPros) is just what its name suggests, a group of young Muslim professionals who get together for South Florida events. According to the organization’s website, the events help them “to network, exchange ideas, share resources, and build community.” Many of these events, though, feature Margate, Florida imam Izhar Khan, someone who, not long ago, was considered a threat to our nation. Last month, the group advertised one such event, a ‘maghrib & meet-up’ for August 17th. The flyer for it states, “Join the South Florida Muslim Young Professionals for prayer, snacks, and Q&A with Imam Izhar!”

In May 2011, Khan was arrested and spent 20 months in a Miami federal detention center for his alleged participation in a scheme to ship $50 thousand to the Taliban for the purpose of murdering American troops overseas. As stated in the indictment against him and his family: “Izhar is a Pakistani Taliban sympathizer who worked with [his father Hafiz] and others to collect and deliver money for the Pakistani Taliban… Izhar… provided and attempted to provide material support and resources… knowing and intending that they be used in preparation for and in carrying out… a conspiracy to murder, kidnap, and maim persons in a foreign country.”

Khan is imam of Masjid Jamaat Al-Mumineen (MJAM), a Margate, Florida mosque that features on its website a library filled with texts promoting female genital mutilation, death punishments for homosexuals, stoning of women, and hatred of Jews, Christians and Hindus. One MJAM text, Tafsir Ibn Kathir, states, “[B]eware of the Jews, your enemies, lest they distort the truth for you in what they convey to you… [D]o not be deceived by them, for they are liars, treacherous and disbelievers… Allah forbids His believing servants from having Jews and Christians as friends, because they are the enemies of Islam and its people, may Allah curse them.”

The August meet-up was not the only SoFloMoPros event with Khan. In fact, there have been many. The group has used its social media to advertise over a dozen events it has participated in, featuring Khan, including a number of events hosted by MJAM. One event, in August 2017, featuring Khan at MJAM, was ironically titled, ‘Islam & Feminism.’ In MJAM’s text, Commandments by God in the Quran, it states, “Men have authority over women because Allah has made the one superior to the other… Good women are obedient… As for those from whom you fear disobedience admonish them and send them to beds apart and beat them.”

Khan appears to be the spiritual advisor of SoFloMoPros, but why would they allow someone such as this to be so influential to their group? We only need to look at who else they affiliate with. SoFloMoPros is a member org of the South Florida Muslim Federation, an umbrella group for the majority of radical Muslim entities in South Florida. SoFloMoPros has attended events and raised money for Islamic Relief (IR), an Islamist charity that has been banned by a number of nations. Israel has labeled IR a front for Hamas, UAE designated IR a terrorist group, and in 2014, Britain’s HSBC bank cut ties with IR over concerns about “terrorist financing.”

One of the recent past alumni of SoFloMoPros is Syed Ammar Ahmed. In February 2010, following a debate he participated in at a school, Ahmed wrote, “I hate white people” and joked that he “should have threatened to blow up the school.” Ahmed is currently the Government Affairs Coordinator at ICNA Relief USA. ICNA or the Islamic Circle of North America is the American arm of South Asian Islamist group Jamaat-e-Islami (JI). ICNA has had dealings with South Asian terrorist group Lashkar-e-Taiba (LeT) and, for 30-plus years, has harbored former JI death squad commander Ashrafuz Zaman Khan, placing Khan in ICNA’s top leadership.

The South Florida Muslim Young Professionals’ involvement with Izhar Khan and MJAM is no mistake. The organization surrounds itself with Muslim extremism and even has its own terror-related members. Portraying itself as a group of “young professionals,” holding mixers and meet-ups, and using an innocuous acronym for its name do not mitigate these facts. Indeed, embracing Khan and MJAM, as SoFloMoPros does, is a tacit approval of them and their activities. SoFloMoPros is simply another manifestation of radical Islamic ideology and, along with those it associates with, the organization should be investigated and shut down.