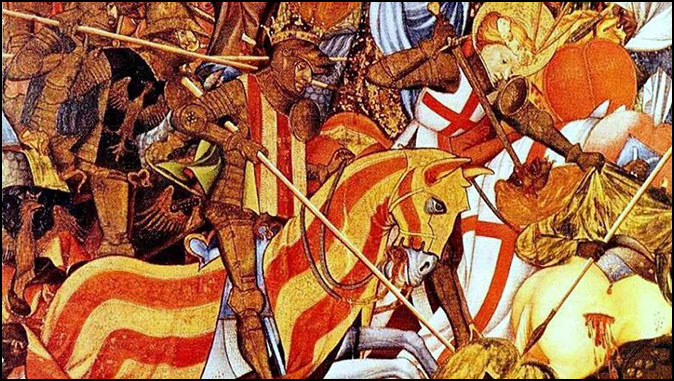 Spain Relives Its Ancient History With Islam
A history that also shows Spain how to survive – should it actually care to.
By Raymond Ibrahim

Spain is reliving its ancient history with Islam.

Ongoing reports indicate that Muslims migrants from North Africa are illegally entering and flooding Spanish territory. In just 2020, 23,000 migrants invaded Spain’s Canary Islands, representing a 234 percent increase. Most recently, in just one day, some 6,000 North Africans invaded Ceuta “by sea, either swimming or with inflatables, all in a bid to eventually get to mainland Europe.”

Once arriving on Spanish territory, such migrants invariably engage in unsavory and downright criminal behavior, such as gang-rape, and create enclaves, or ribats, where police fear to tread.

In other words, North Africa’s Muslim invaders are following the same strategy that led to the Islamic conquest of Christian Spain in the eighth century.

Recalling that history and how the Spaniards responded is instructive.

In 711, exactly 1,310 years ago, hordes of North African Muslims (“Moors”) “godlessly invaded Spain to destroy it,” to quote from the Chronicle of 754. They did not pass “a place without reducing it, and getting possession of its wealth,” boasted al-Hakam, an early Muslim chronicler, “for Allah Almighty had struck with terror the hearts of the infidels.”

Such terrorism was intentionally cultivated, in keeping with the Koran (e.g., 3:151, 8:12). In one instance, the invaders slaughtered, cooked, and ate or pretended to eat their Christian captives, prompting hysteria among “the people of Andalus [Spain] that the Muslims feed on human flesh,” and thereby “contributing in no small degree to increase the panic of the infidels,” wrote another Muslim chronicler.

Emboldened by their coreligionists’ initial victories, and reminiscent of what is happening today, swarms of Africans “crossed the sea on every vessel or bark they could lay hold of,” the Muslim chronicler continues; they so overwhelmed the peninsula that “the Christians were obliged to shut themselves up in their castles and fortresses, and, quitting the flat country, betake themselves to their mountains.”

By 712, one year after the Islamic invasion, the Muslims had, in the words of the Chronicle of 754, “ruined beautiful cities, burning them with fire; condemned lords and powerful men to the cross; and butchered youths and infants with the sword.” Several other early sources corroborate the devastation and persecution. The oldest account, the Tempore belli, tells of Muslims “sacking Christian temples [churches] and homes, burning the cities of those who resisted, and taking their young women as sexual slaves, all creating an indescribable terror.”

Eventually, Pelagius, better known as Pelayo (685–737), a nobleman, fled to the mountains of Asturias in the furthest north of Spain, where he “joined himself to as many people as he found hastening to assemble.” There, the assembled Christian fugitives declared Pelayo their new king; and the Kingdom of Asturias—the first Christian kingdom after the Islamic conquest of Spain—was born, sometime between 718 and 722.

Before long, a large Muslim army was sent to bring these infidel rebels to heal. Oppa, another nobleman or clergyman now serving the Muslims as a dhimmi, was sent to parley with Pelayo at the mouth of a deep cavern: “If when the entire army of the Goths was assembled, it was unable to sustain the attack of the Ishmaelites [meaning Arabs, during their initial invasions in 711], how much better will you be able to defend yourself on this mountaintop? To me it seems difficult. Rather, heed my warning and recall your soul from this decision, so that you may take advantage of many good things and enjoy the partnership [of the Arabs].”

“I will not associate with the Arabs in friendship nor will I submit to their authority,” Pelayo retorted, adding, “Christ is our hope that through this little mountain”—which he likened to the “mustard seed” of the famous parable that eventually grows into something great (Mark 4:30-32) —the “well-being of Spain … will be restored.”

There and then, on May 28—last week in history—battle commenced; due to the terrain which was conducive to their guerilla tactics, the vastly outnumbered Christians prevailed, thereby finally stemming the tide of Islam, which, except for this tiny Asturian stronghold, had swept through and conquered the whole of Spain.

A despicable barbarian, whose name was Belay [Pelayo], rose in the land of Galicia, and, having reproached his countrymen for their ignominious dependence and their cowardly flight, began to stir them up to revenge the past injuries, and to expel the Moslems from the land of their ancestors. From that moment the Christians of Andalus began to resist the attacks of the Moslems on such districts as had remained in their possession, and to defend their wives and daughters… The commencement of the rebellion happened thus: there remained no city, town, or village in Galicia but what was in the hands of the Moslems, with the exception of a steep mountain …. [There, Pelayo] took refuge with three hundred followers, whom the Moslems ceased not to pursue and to attack, until the greater part of them died of hunger, and Belay remained with only thirty men and ten women, whose sole food consisted of honey which they gathered in the crevices of the rock…. However, Belay and his men fortified themselves by degrees in the passes of the mountain until the Moslems were made acquainted with their preparations; but, perceiving how few they were, they heeded not the advice conveyed to them, and allowed them to gather strength, saying, ‘What are thirty barbarians, perched upon a rock?—they must inevitably die.’ Would to Allah that the Moslems had then extinguished at once the sparkles of a fire that was destined to consume the whole dominions of Islam in those parts!

Writing in retrospect, the Muslim historian’s lament is appropriate; for, from that tiny mountain kingdom in the north, and over the course of centuries of devastating wars—jihads and reconquistas—Spain’s Christians managed to reclaim their country from Islam.

But that is another long and painful story—one that the modern West has, lamentably, learned nothing from.