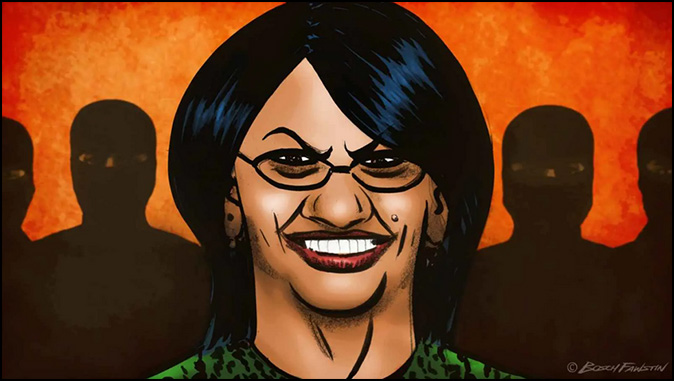 Rep. Rashida Tlaib’s Favorite BDS Group Mourns an ISIS Terrorist
ISIS is in Israel, but their supporters are in America.
By Daniel Greenfield

When Baraa Lahlouh, an Islamic terrorist, was recently buried, he was draped in what the Agence France-Presse (AFP) misleadingly described as “a flag showing the seal believed to have been used by Islam’s Prophet Mohamed”.

The wire service neglected to mention that it was more specifically the ISIS flag.

The Associated Press, as documented by CAMERA, distributed photos of the burial while neglecting to describe the ISIS flag. Along with burying a terrorist, they buried the lede.

The growing presence of ISIS in Israel and its overlap with the established Islamic terrorist groups like the PLO and Hamas has forced the media into new extremes of evasiveness.

The PLO’s Foreign Ministry responded to the shooting of he ISIS terrorist by calling it a “hideous crime” It falsely accused Israel of “war crimes” against “defenseless Palestinian citizens.”

WAFA, the PLO’s news agency, charged Israel with “cold-blooded murder” in which, according to the terrorist outlet, the ISIS terrorist and his comrades were “ambushed and shot dead in cold blood”.

The PLO’s support for ISIS terrorism against Israeli Jews is nothing new.

In March, an ISIS terrorist carried out an attack at a shopping mall in Beersheva that killed four Israelis including a rabbi who ran a soup kitchen and who left behind four children.

That same month, two Islamic terrorists opened fire at a bus stop, one of whom had previously tried to join ISIS. They released a video featuring an ISIS flag and pledging allegiance to the ISIS caliph.

After the attack, ISIS issued an official statement boasting of, “12 infidel Jewish forces killed and wounded in a sacrifice attack carried out by soldiers of the Caliphate in northern Palestine.”

Hamas praised the “valor and courage” of the attack. Another Al Jazeera personality, Ahmed Mansour, celebrated the ISIS attack for having “killed and wounded many occupation soldiers [and] was a painful blow in the heart of Israel and of its Arab Zionist allies.”

The Palestinian Authority made no official statement, but is likely to make payments to the families of the terrorists under the ‘Pay-to-Slay’ program. That program was at the center of the debate over continuing foreign aid by the United States to the PLO and its Ramallah regime.

Even as ISIS is becoming part of this terrorist landscape in Israel, Biden is preparing to visit the terrorist-occupied territories inside Israel to meet with PLO dictator Mahmoud Abbas and assorted terrorist leaders.

The administration is already undermining israel by running a shadow consulate to the terrorists.

It has also poured hundreds of millions into PLO territories with official numbers topping $500 million. The unofficial numbers are likely to go well beyond that half a billion dollars.

And, as noted by Mark Goldfeder of the National Jewish Advocacy Center, the shadow consulate is “designed to help facilitate that aid… also illegal under the 2018 Taylor Force Act” which bans “any assistance that directly benefits the PA unless and until the PA stops paying terrorists to kill American and Israeli citizens”. And the PA/PLO won’t stop doing that.

The growing presence of ISIS in Israel benefits from the ‘Pay-to-Slay’ program funding attacks against Israel as well as the larger infrastructure of terrorist media and organizations maintained by the PLO. And, much as the Biden administration continues to funnel nearly $1 billion in “aid money” into Afghanistan despite the Taliban takeover, the same is true of terrorism in Israel.

Unlike the PLO, Hamas, and the Taliban, ISIS remains so horrifyingly unacceptable that the Biden administration and the media can only handle its existence by entirely ignoring it.

The whitewashing of Baraa Lahlouh’s burial in an ISIS flag by evasively describing it as the seal of Mohammed has become typical. Pro-terrorist sites like Electronic Intifada denounced the death of the ISIS terrorist as an “extrajudicial execution”. And they were not alone in spewing anti-Israel hate while refusing to even mention the ISIS elephant in the terrorist room.

The Institute for Middle East Understanding (IMEU) mourned the ISIS terrorist and his comrades, “Laith, Baraa, and Yusuf“ as “young men with entire lives ahead of them.”

“They should be here today, but due to Israel’s relentless and deadly violence against Palestinians, their loved ones will never see or hold them again,” IMEU complained.

The organization is a 501c3 non-profit. Propagandizing on behalf of a terrorist buried in an ISIS flag would seem to run counter to the non-profit regulations that never seem to be enforced against the enemies of this country, only against its patriots and its defenders.

IMEU has been funded in the past by the Soros network, the Rockefeller Brothers Fund, the Tides Foundation, and the Foundation for Middle East Peace. Leading leftist funders are now kissing cousins with apologists for ISIS terrorists. And it does not just stop there.

Tlaib has a longstanding relationship with IMEU with both the BDS group and the anti-Israel politician promoting each other. And, in the process, Islamic terrorism, including ISIS.