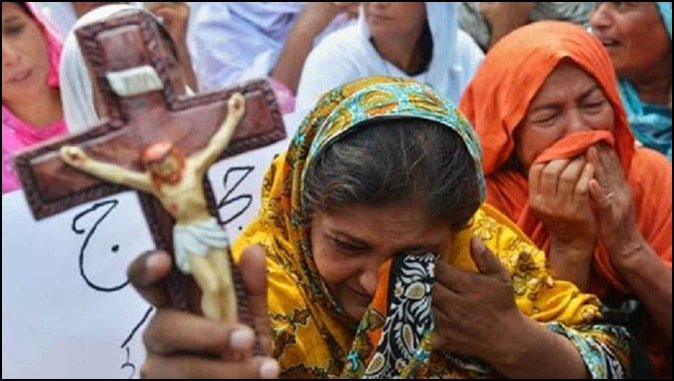 Raping and Impregnating Infidels: “Another Form of Jihad”
How the terrorists kill two birds with one stone.
By Raymond Ibrahim

Because more numbers equate more power and influence, Muslims from all walks of life—including Muammar Gaddafi—have made clear that the act of procreating is a form of jihad. Thus, in the U.K., “Muslim hate fanatics plan to take over Britain by having more babies and forcing a population explosion,” a report revealed back in 2008: “The swollen Muslim population would be enough to conquer Britain from inside.”

A Christian Eritrean volunteer and translator who worked in migrant centers in Germany, and was often assumed to be Muslim by the migrants, confessed that “Muslim migrants often confide in her and tell her about their dislike towards Christians,” and that “a number of the Muslim migrants she has spoken to have revealed a hatred for Christians and are determined to destroy the religion.” As to how they plan on accomplishing this, “Some women told me, ‘We will multiply our numbers. We must have more children than the Christians because it’s the only way we can destroy them here.’”

There is, however, an even more sinister and largely unknown way of prosecuting this “procreation” jihad—a way of killing two birds with one stone: seize and seed non-Muslim women with Muslim babies. Doing so depletes the infidels’ ranks of women and the non-Muslim babies they might have birthed, while simultaneously increasing both for Islam.

As the aforementioned procreation jihad account from Germany might suggest—where female Muslim migrants “revealed a hatred for Christians and are determined to destroy the religion”—Christians are especially being targeted in this manner.

In Nigeria, for instance, which is roughly half Muslim, half Christian, thousands of Christian girls have been abducted, forced into Islam, married off and transformed into incubators of future jihadis. Put differently, the nearly three hundred Christian Chibok girls who made headlines in 2015—some of whom were brainwashed to “cut the throats of Christians—are the tip of the iceberg. As the Hausa Christian Foundation of Nigeria, a human rights group, recently explained:

The case of abducting Christian Girls and their forceful conversion to Islam as well as forcing them into marriage has become a water shed issue in Northern Nigeria…. The moment these girls are abducted, they are subjected to all manners of evil just to take control of their minds. Once they took hold of their minds, these girls will only do everything they are asked to do. While the parents fight for the release of their daughters, these abductors continue to sexually abuse these girls, hypnotized [subliminally influenced] their food, drinks, clothes, where they sleep, perpetually evoke evil spirit upon them to the point that these girls completely lost their minds and never think of going back to their home. Usually, the moment a Christian girl is abducted they ensure that they get married to her within one or two weeks. She will be sexually abused even before the marriage to make the parents give up on her when she becomes pregnant.

In the same statement, the Hausa Christian Foundation made this very telling remark:

The incessant kidnapping of the Christian girls and the forceful conversion to Islam is another form of Jihad in the 21st Century. They have two major aims for doing that: To inflict pain on the parents of the girl and the Christian community; and to impregnate the girl to add to their claims that Islam is the fasted growing religion in the world. They are doing it on purpose.

The statement went on by sarcastically “wondering” how unclean “infidels [kidnapped Christians] can be used to advance such a holy and clean religion like Islam…. But we know what the religion is all about. Everything is welcome no matter how evil and inhumane, as long as it will help Allah, especially the killings, the attacking, kidnapping, raping and enslaving of Christians.”

The same phenomenon prevails wherever Christian minorities live alongside Muslims. In Egypt, countless Christian girls have been abducted for the very same reason—to bring them into the fold of Islam, diminish the numbers of the infidels, and increase that of the Muslims. The schemes often take elaborate and complex forms. Most recently, an unknown woman posing as a Coptic nun, along with an unknown man posing as her monk assistant, were exposed by the Coptic pope as frauds that were using their religious garb to get near and win the trust of young Christian girls.

In 2017, an ex-kidnapper, who “admits he was in a network actively targeting Coptic girls for years before he left Islam,” explained the systematic and sophisticated process in Egypt:

A group of kidnappers meets in a mosque to discuss potential victims. They keep a close eye on Christians’ houses and monitor everything that’s going on. On that basis, they weave a spider’s web around [the girls]…. I remember a Coptic Christian girl from a rich, well-known family in Minya. She was kidnapped by five Muslim men. They held her in a house, stripped her and filmed her naked. In the video, one of them also undressed. They threatened to make the video public if the girl wouldn’t marry him…. The kidnappers receive large amounts of money. Police can help them in different ways, and when they do, they might also receive a part of the financial reward the kidnappers are paid by the Islamisation organisations. In some cases, police provide the kidnappers with drugs they seize. The drugs are then given to the girls to weaken their resistance as they put them under pressure. I even know of cases in which police offered help to beat up the girls to make them recite the Islamic creed. And the value of the reward increases whenever the girl has a position. For example, when she is the daughter of a priest or comes from a well-known family…. The Salafist group I knew rented apartments in different areas of Egypt to hide kidnapped Coptic. There, they put them under pressure and threaten them to convert to Islam. And once they reach the legal age, a specially arranged Islamic representative comes in to make the conversion official, issue a certificate and accordingly they change their ID…. If all goes to plan, the girls are also forced into marriage with a strict Muslim. Their husbands don’t love them, they just marry her to make her a Muslim. She will be hit and humiliated. And if she tries to escape, or convert back to her original religion, she will be killed.

Although such networks have been around since the 1970s, they reached their “highest levels now, in the era of President Sisi,” the former kidnapper added.

In Pakistan—another Muslim majority nation where the kidnap, rape, and forced conversion of Christian girls is endemic—the Asian Human Rights Commission said this in a 2011 report:

The situation is worse with the police who always side with the Islamic groups and treat minority groups as lowly life forms. The dark side of the forced conversion to Islam … also involves the criminal elements who are engaged in rape and abduction and then justify their heinous crimes by forcing the victims to convert to Islam. The Muslim fundamentalists are happy to offer these criminals shelter and use the excuse that they are providing a great service to their sacred cause of increasing the population of Muslims.

Even in Indonesia—once known as the quintessential “moderate Muslim” nation—last year a report found that “a new form of persecution is on the rise—Christian girls are being targeted by Muslim men… Influential leaders are literally training young men to target Christian girls to impregnate them.” The report continues:

They target them to try and sort of diffuse the spread of Christianity because the family of the Christian girl is so ashamed [of the impregnation] … they’re forced into marrying that daughter into a Muslim family…. and the Muslims who are being trained to do this, they understand that. That’s why they’re doing that…. Once girls are married into the Muslim families, they’re often cut off from or abandoned by their families and they face even more difficult circumstances. In some cases, girls are the second or third wife of their persecutor and they have few freedoms.

In the end, all these overlooked and/or abandoned Christian girls transformed into Muslim baby producing factories are part of the equally overlooked procreation or demographic jihad, which will see that one out of every three people on earth is Muslim by 2070.

Islamic Polygamy Rapidly Expanding in the West By Bill Muehlenberg December 18, 2016 As Australia…

Sex-Slavery: An Islamic Sacrament? ISIS may have popularized it, but concubinage is integral to Islam.…