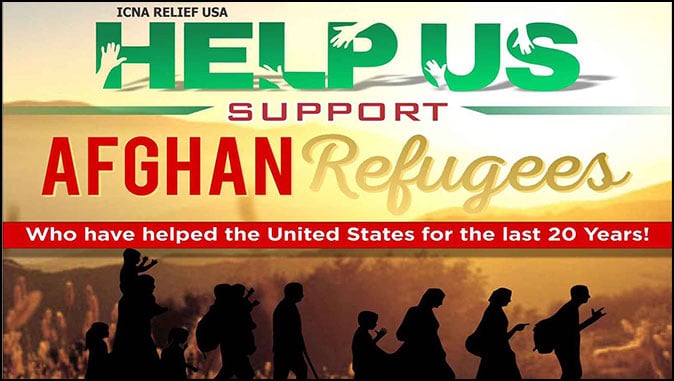 Following America and her Afghan allies’ handing over control of Afghanistan to Taliban jihadists, US troops scrambled to get fellow Americans as well as those who helped our military and their families out of the country. Along with them, the US evacuated tens of thousands of Afghan refugees, who have been allowed to resettle in the US. One of the organizations that has been tasked with resettling them is ICNA, a radical Muslim group linked to South Asian terror. With a number of these refugees already having been flagged with potential ties to terrorism, themselves, ICNA’s involvement in this can only be seen as a recipe for disaster.

ICNA or the Islamic Circle of North America is the American arm of South Asian Islamist group Jamaat-e-Islami (JI), a body openly sympathetic to the Taliban and al-Qaeda. For 30-plus years, ICNA has harbored JI death squad leader Ashrafuz Zaman Khan, placing him in ICNA’s top leadership. ICNA has collaborated with and has promoted Falah-e-Insaniat Foundation (FIF), a US and Pakistan-banned front for Lashkar-e-Taiba (LeT). In August 2006, ICNA was a partner and top donor to JI’s Al-Khidmat Foundation (AKF), at the same time AKF took a delegation to Syria to hand-deliver $100,000 to then-Hamas leader Khaled Mashal for violence against Israel.

ICNA has sponsored fundraising banquets featuring Monzer Taleb, a former leader of a singing troupe claiming to be “from Hamas,” who refers to Hamas militants as “SUPERHEROES” and who wrote, in June 2019, that Jews in Israel “should be relocated to Germany.” In July 2014, ICNA co-sponsored a pro-Hamas rally outside the Israeli Consulate in downtown Miami, where attendees repeatedly chanted, “We are Hamas,” “Let’s go Hamas,” and “Hamas kicked your ass.” Following the rally, the event organizer, Sofian Zakkout, wrote in Arabic, “Thank God, every day, we conquer the American Jews like our conquests over the Jews of Israel!”

In October 2000, on the homepage of ICNA’s South East Region website, ICNA promoted links to the official websites of Hamas, Hezbollah and the Taliban. Under the links was a directive from then-ICNA President Mohammad Yunus asking fellow Muslims to provide “material support” to what appeared to be Chechen militants linked to al-Qaeda. It stated, “Remember Your Fellow Chechnyan Muslims… We must show our spiritual and material support for our brothers and sisters being oppressed by the brutal Russian forces.” Immediately following the message was a link to qoqaz.net, a financing and recruitment website for al-Qaeda.

In February 2019, US Representative Jim Banks issued a congressional resolution calling on various government agencies “to halt all partnerships and funding arrangements with groups affiliated with Jamaat-e-Islami and its domestic affiliates,” including ICNA and ICNA Relief. The resolution further called on law enforcement to investigate ICNA’s “reported collaboration with components of the Pakistani terrorist network, Lashkar-e-Taiba.”

On August 25th, ICNA published a video discussing its participation in the project to resettle newly evacuated Afghan refugees in America. Speaking on the video was Samiullah Ibrahimi, the President of Afghan Home USA and no small figure, when it comes to Afghanistan. Ibrahimi is the former 1st Deputy Governor of Da Afghanistan Bank, the central bank of Afghanistan, which, prior to the Taliban takeover, regulated all banking and money handling operations in Afghanistan. While standing outside a bus of newly arrived refugees, Ibrahimi stated, “We are coordinating efforts with ICNA Relief USA and other relief organizations on the ground.”

Appearing on the video was ICNA Relief Director of Refugee Facilitation Hala Halabi. Halabi has used Facebook to promote the ideas of Syrian scholar Mohammed Rateb al-Nabulsi, who has endorsed suicide bombings and the death penalty for homosexuals, and Saudi cleric Saad al-Ateeq, who has publicly prayed for the destruction of Jews and Christians. Also taking part on the video was ICNA Relief USA Chief Operating Officer Abdul Rauf Khan. Khan is an avid fan of Louis Farrakhan and has used social media to target Jews and gays. In July 2014, Khan posted an anti-Semitic video labeling comedian talk show host Bill Maher, “Zionist Jew Bill Maher.”

It has been reported that a number of the evacuated Afghan refugees were found to have potential links to terrorism. According to NBC News, “Of more than 30,000 evacuees from Afghanistan to the US, about 10,000 needed additional screening… and of those about 100 were flagged for possible ties to the Taliban or terror groups.” The report states that, even after this, the flagged individuals may be allowed to remain in the US. According to Homeland Security Secretary Alejandro Mayorkas, some evacuees showed up directly on terror watch lists and were “not allowed to enter the US” – that is, of course, until they are deemed non-threats.

Given ICNA’s documented associations with and promotion of overseas terrorism, specifically with regard to South Asia, the group’s assistance in the resettlement of Afghan refugees poses an obvious danger to national security. Can anyone trust that terrorist sympathizers working within ICNA will not facilitate the infiltration of jihadis into America, while providing them with funding and logistical support? Affording ICNA a role in resettling Afghans is as suicidally negligent as housing the refugees on US military bases, which is also taking place.

America and her allies conceded power to the Taliban, while leaving billions of dollars in taxpayer-funded military equipment to the violent group. Once again, Afghanistan has been rendered an Islamic terrorist state and soon-to-be international hub for terror. If this isn’t bad enough, our government has transferred tens of thousands of improperly vetted Afghans onto America’s shores, effectively bringing the jihad into our own backyards. And now, ICNA has been tasked with aiding their resettlement.

The security of our nation hangs in the balance.