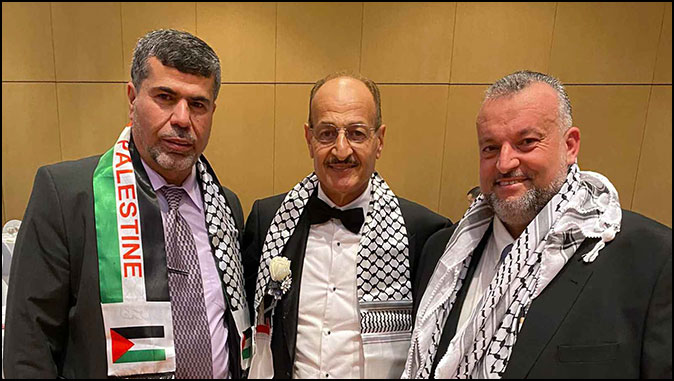 The Orlando, Florida wedding of Obaidah Fariz and Dania Rum superficially looked like most other weddings, a cheerful celebration with dancing and joyous laughter from family and friends. However, casting a pall over the enchantment of the event were numerous Palestinian flags, keffiyehs and those individuals alleged to be members of a vicious terrorist organization. They include the father of the groom, Hatem Fariz, and wedding guest, Ghassan Ballut, both of whom were named in an indictment charging them and others with a southwest Florida conspiracy to provide material support to Palestinian Islamic Jihad (PIJ).

The wedding between Obaidah and Dania transpired at Orlando’s Rosen Plaza, on December 26, 2021. The prior night, a gathering of men took place poolside and at the hotel’s restaurant, led by the groom’s father. The majority of photos from the gathering contain images of Gassan Ballut, the West Bank-born founder and Director of al-Nahda, a Chicago-based outfit that refuses to recognize Israel as a sovereign state and lobbies against any normalization agreements made with Israel. Ballut showed up, as well, in many of the pictures and video from the wedding reception.

On Thursday, February 20, 2003, during early morning raids, Sami Amin al-Arian, Sameeh Hammoudeh, Hatem Naji Fariz, and Ghassan Zayed Ballut were arrested and charged, along with four others residing overseas, with “operating a racketeering enterprise… that engaged in a number of violent activities… conspiracy within the United States to kill and maim persons abroad, conspiracy to provide material support and resources to PIJ, conspiracy to violate emergency economic sanctions, engaging in various acts of interstate extortion, perjury, obstruction of justice and immigration fraud.”

The defendants had been involved in the establishment and preservation of a Tampa PIJ network that consisted of a think tank, the World & Studies Enterprise (WISE); a charity, the Islamic Concern Project (ICP) or Islamic Committee for Palestine; a mosque, the Islamic Community of Tampa (ICT) or Masjid Al-Qassam; and a children’s school, the Islamic Academy of Florida (IAF). While WISE and the ICP have since been closured, the mosque and the children’s school (which is adjacent to the mosque) are still in operation, the school now going by the name American Youth Academy (AYA).

According to the FBI, both Hatem Fariz and Ghassan Ballut were members of PIJ, though “Ballut was a member of the PIJ in a cell in Chicago, Illinois.” The indictment alleges that the two did “conspire… to commit offenses against the United States… by making and receiving contributions of funds, goods, and services to or for the benefit of the Palestinian Islamic Jihad.” The indictment also discusses a talk Fariz had with Ballut about a PIJ suicide bombing in northern Israel that took the lives of 17 innocents. Ballut described the attack as being “successful.” Fariz revoltingly laughed and made light of it.

Following the trial, Fariz was convicted of providing material support for PIJ and served out a 37-month prison sentence. After his release, he was hired as Masjid Al-Qassam’s Managing Director, a position that he continues to hold.

Unlike Fariz, Ballut was acquitted of his charges, but this by no means should make him appear unsympathetic to the goals of PIJ. Indeed, much of his life is devoted to the destruction of Israel, which he repeatedly refers to as the “Zionist enemy.” He promotes on social media a conspiracy theory claiming one can utilize the Quran to calculate Israel’s demise. In April 2018, he wrote, “A small missile on Israel will flip the equation and make the calculations come true… Death to the cowardly zionist entity.” In May 2020, he wrote, “The nation’s battle with this treacherous enemy continues no matter how long it takes… until the whole country is eliminated…”

Ballut has not only targeted Israel with his vitriol, but he has targeted Jews, themselves. In November 2018, he posted on Facebook an anti-Semitic graphic, titled “THE REAL JEWISH HOMELAND,” falsely declaring Jews are the product of a mass conversion to Judaism taking place in “Khazaria” and have zero connection to Israel. In February 2020, he offensively posted that the $50 billion promised in President Trump’s ‘Deal of the Century’ could instead be used “to repatriate the Israelis back to Europe.” He has also repeatedly quoted Hitler for the purpose of condemning those Palestinians who sell land to Jews, whom he considers “collaborators.”

Ballut has kept steadfast and loyal to his alleged PIJ roots. For the 33rd anniversary of the October 6, 1987 PIJ prisoner escape, which is said to be one of the catalysts for the First Palestinian Uprising (Intifada), Ballut referred to the escapees as “stars… of the First Intifada.” And aside from his reunions with Fariz, Ballut has made frequent posts on social media that include images and reports from his fellow Tampa PIJ “co-conspirators” Sami al-Arian and Mazen al-Najjar. Ballut has further posted several memorials for Tampa “co-conspirator” Sameeh Hammoudeh, who died of cancer in May 2019.

Moreover, Ballut has threatened the US, posting on Facebook, in January 2020, that, as a result of the US assassination of Iranian Quds Force Commander Qasem Soleimani, “America… will pay its price for a long time.”

It remains glaringly obvious that, when the US Justice Department charged immigrant Ghassan Ballut with having involvement in a terrorist organization, there was ample reason to do so. His participation in an affair, which also involves convicted PIJ member Hatem Fariz – even if it seems to be as innocuous as a wedding – should give US authorities cause for concern. His threats against America and his calls for US ally Israel’s destruction must, as well, be investigated. With his views and with the dangerous and sordid history of his terrorist colleague Fariz, neither should be allowed to continue living in the US with impunity.