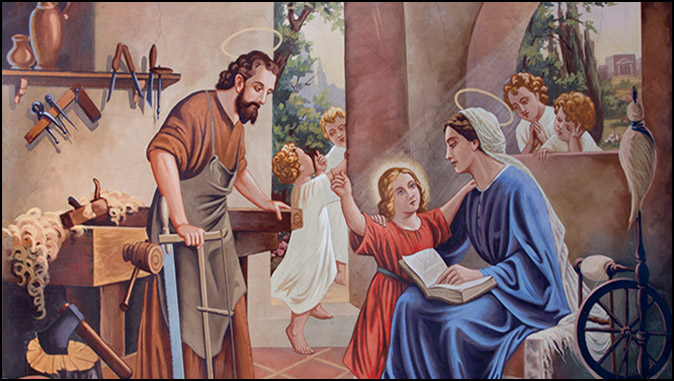 Jesus, Mary, and Joseph: ‘Canceled’ in Egypt
By “unknown persons.”
By Raymond Ibrahim

Belonging to the Monastery of the Virgin Mary, in Durunka, Asyut Governorate, the large icon depicts the Holy Family: Jesus, Mary, and Joseph. As part of their tourism efforts, Egyptian officials had asked the monastery — which is built atop a spot frequented by the Holy Family when they fled to and stayed in Egypt during Christ’s youth — to bring the icon out to the entrance of the road that leads to and is about a mile away from the monastery.

For the first time this year, travelers to Egypt can follow what is believed to be the trail that the Holy Family followed in this foreign land, thanks to the completion of a long-anticipated project by Egypt’s Ministry of Tourism and Antiquities.

The project, which connects twenty-five locations [including the monastery in Durunka] connected to the Holy Family’s journey through the country, had been under development since 2013 and launched in May 2022, when the final sites of the trail were opened for the public.

Despite such “ecumenical” efforts, on Jan. 9, 2023, the monastery’s monks discovered that the large icon had been defaced with black spray paint smeared all over the faces of the Holy Family. Another, less valuable icon also at the entrance was similarly vandalized.

Monastery officials immediately removed the icon back into the monastery, where they have reportedly managed to restore it.

Discussing this incident, and how Egyptian officials and media are stressing that the identity of the vandals is unknown, a Coptic journalist, somewhat sarcastically said, “We know what ‘unknown persons’ mean” — an apparent reference to the fact that Islamic hostility against Christian icons is nothing new.

Nor is it limited to the Islamic world. In one instance in Greece—where 2,339 incidents of church desecrations have been recorded since Muslim migrants first flooded that nation in 2015 — Muslims videotaped one of their own, topless and dancing to rap music, entering into and utterly desecrating a small church, including by smashing its icons.

As for Egypt, though the Jan. 9 assault on one of the spots of the Holy Family’s journey may seem to bode ill for that nation’s tourism efforts, there is, in fact, little to fear. Unlike Egypt’s Christians and their private churches — which are attacked with seeming impunity — the 25 points of the Holy Family’s journey involve Egypt’s image and money-making efforts. No doubt all proper precautions will be taken to safeguard against any would-be Islamic assaults.

ISIS Bride Wanted to See Americans Killed, But Hey, Now She Misses Alabama This would…