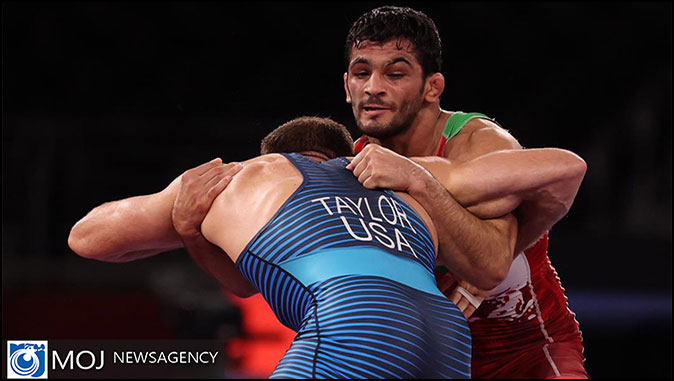 Mark your calendar: the moment you’ve been waiting for is finally on the horizon. The national wrestling team of the Islamic Republic of Iran is coming to the United States to play our team in Arlington, Texas on February 12. Sardar Pashaei, the Iranian-American ex-head coach of Iran’s national Greco-Roman wrestling team, said it was a “friendship match.” But Alireza Dabir, president of the Islamic Republic of Iran’s wrestling federation, has other ideas, saying that the match is all about “Death to America.” And so in wrestling, as in the political sphere with the nuclear talks in Vienna, the U.S. reaches out to Iran while Iran remains relentlessly hostile.

Dabir explained in a Wednesday television interview that the whole point of the wrestling match was to put the “Death to America” imperative into practice: “We always chant ‘Death to America’ but importantly is showing it in action. A doctor, he might even be wearing a tie, but he is doing his job well. He is saying ‘Death to America.’ Some talk a lot but don’t do much. We need to prove it with an action that [Death to America].”

This grieved Pashaei, who said, “It’s painful for me as a wrestler and national team coach to listen to these words. When I and many other athletes who have been forced to leave their homeland due to pressure from the Iranian government see Alireza Dabir, the president of the Iranian Wrestling Federation, say ‘Death to America,’ while he has the U.S. Green Card in his pocket. Why should someone (Alireza Dabir), who has been one of the athletes very close to the Iranian government in all the past years and part of the government’s propaganda, be able to travel freely to the United States?” That’s an easy one: because Biden’s handlers would rather cut off their own thumbs than anger the Iranian mullahs.

Pashaei noted that this appeasement policy carried clear risks. “The U.S. government and security agencies should take the entry of such people seriously because they are part of a force very close to the Iranian government. In the past, we saw the presence of terrorists in the guise of ambassadors and diplomats, and now we see the regime sending its people in the form of athletes, including Javad Foroughi, a shooter member of the Revolutionary Guards at the Tokyo Olympics.” Pashaei added, “We also remind the American Wrestling Federation that holding a friendly match between Iran and the United States will only serve the Iranian government’s propaganda.

Indeed — Dabir has made that clear by repeating the regime’s primary slogan, “Death to America.” It’s useful to remember that, even as the original Iran nuclear deal was being concluded back in 2015, 192 of the 290 members of the Iranian Majlis (Parliament) declared, “The martyr-nurturing nation of Iran is not at all prepared to abandon the slogan of ‘Death to America’ under the pretext of a nuclear agreement.” The assembled parliamentarians added that “Death to America” had “turned into the symbol of the Islamic Republic and all struggling nations.”

This view even finds a sympathetic reception among some Leftist Americans. Journalist Andy Ngo reported that, in late August 2020, “around 700 black bloc militants and their supporters rampaged through Oakland, Cal. They chanted ‘death to America’ while starting fires and smashing cars and buildings.” The week before that, according to Townhall’s Julio Rosas, “An American flag was just burned outside the Kenosha County Courthouse. One woman screams, ‘Death to America!’ and kicks the fence.”

This understandably delighted some Iranians. Iranian Ayatollah Lotfollah Dezhkam, Supreme Leader Khamenei’s representative in Iran’s Fars province, stated in a Friday sermon: “The shout of the Iranian nation [is] being heard from the mouths of the Americans themselves: Death to America!” Dezhkam gloated over what he believed were signs of the imminent demise of the United States. “The entire world has seen with its very eyes that today, America cannot be the main decision-maker when it comes to strategic matters in the world. We are unequivocally informing the American administration, Republicans and Democrats alike: If you’ve shut your ears with cotton balls, remove them [so you can hear]. The sound of America being shattered and of its collapse is being heard all over the world. The shout of the Iranian nation, which has been leading the fight against America for 40 years, is being heard from mouths of the Americans themselves: Death to America!”

Now Iran’s “Death to America” wrestling team is coming to the Great Satan itself. Those who love this country should not be pleased by this display of “friendship.”