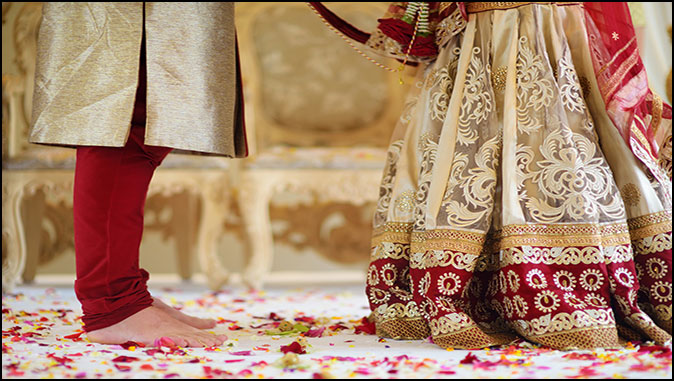 A jewelry brand recently came under fire for an ad featuring a Hindu girl married happily into a Muslim family. The Hindus were vocal in their dissent on social media, and with no intention to offend their biggest customer base further, the jewelry brand chose to take the ad off the air. The Hindus were slandered by secular media for their projected aversion to interfaith marriages.

The Hindus, on the other hand, refusing to kneel in front of the secular forces that are always propagating the idea of “love” between a Hindu girl and a Muslim boy, stood adamant on that one tough question no secular institution finds the courage to answer.

While Hindu or Sikh women marrying Muslim men and converting into Islam is a common occurrence, a celebrated one at that, Muslim women’s involvement with non-Muslim men have often led to such gruesome episodes that the bravest of media houses have failed to summon up the intestinal fortitude to address them.

Enraged after a Muslim girl of age had married a non-Muslim man from the Dalit community (Hindu by faith) on her own accord, a rioting mob of Muslims armed with swords and sticks descended on a Dalit-dominated residential area in the Indian capital city, Delhi, ransacked houses, and attacked locals. The Muslim woman recorded her statement with the local police and left with her husband after their marriage. The family and relatives of the man have reportedly left the locality. Their departure, however, didn’t spare the locals of the area from the Islamic wrath. As local police failed to contain the rampaging mob, the local administration was compelled to deploy paramilitary forces to restore peace.

Back in 2018, this city witnessed 23-year-old Ankit Saxena being brutally murdered by the family members of his Muslim girlfriend. They abducted him, stabbed him, and slit his throat with a chopping knife. The brother of the girl, who played an active part in the blood-curdling crime, was a minor at the time of the slaughter.

Just six months after the Ankit Saxena murder, 22-year-old Sanjay Jha of Faridabad was killed by his Muslim wife’s family. Sanjay and Rukhsar were neighbours and were of the same age when they eloped. A pregnant Rukhsar and Sanjay returned home eight months after their marriage and had been put up by Sanjay’s family. Rukhsar’s family started to pressure Sanjay to convert to Islam; however, upset with Sanjay’s constant refusal, they forced Rukhsar to abort their baby. The situation turned more tense after Rukhsar conceived a child for a second time; it all ended in Sanjay’s coldblooded murder.

In October 2020, Mohammad Raj, Mohammad Afroz and 3 other assailants hacked 18-year-old Rahul Rajput to death for courting a Muslim girl who was sister to one of the assailants. This has become such a regular scene in India that major media houses, doubling as guardians of secularism, have no patience to telecast these incidents.

The savagery has now extended to slaughtering children of other communities befriending and giving gifts to a child from their household, if that child is a girl. 14-year-old Mahesh Kolli was killed, his genitals and nose chopped off, perhaps while he was still alive. His body was packed into a gunny sack and drowned in a local river, from which the police recovered it. The mother of the Muslim girl Mahesh had befriended and to whom he had allegedly given a phone has been arrested for plotting the gory murder, with the assistance of her friend Mehboobsab.

Brutality from Islamic jihadis is commonplace when non-Muslim men fall in love with Muslim women, and they actively participate in eliminating the men who dare to do this. However, it is partly baffling and partly funny how movies – yes, you read it right, movies — depicting the romantic possibilities of a Muslim girl with a Hindu boy have led to chaos and death threats in this part of the world.

Back in 1995, the maverick filmmaker of the Indian film industry, Mani Ratnam, received threats from Muslims who demanded a total ban of his film Bombay (1995) that depicted a Muslim woman marrying a Hindu man in a riot-torn Bombay. Crude bombs were hurled at his residence; Ratnam had a narrow escape and sustained minor injuries.

“How can they show a Sikh applying sindoor on the forehead of a Muslim girl?,” questioned street vendor Abdul Sattar in Ahmedabad. He was referring to the fictional characters of the 2001 Hindi film Gadar. The movie, set against the backdrop of the Indian partitions, centred on the love story of a Muslim girl and a Sikh man. It was protested vehemently by Muslims claiming “hurt sentiments.” Violence, demonstrations and arson were reported in several cities in India, including Ahmedabad, Gandhinagar, Bhopal and Lucknow. Groups of Muslims launched petrol pouches at the screen of a well-known cinema hall and set it ablaze. All this for a three-hour-long piece of fiction. Little has changed in the past 20 years. The situation has only grown wilder.