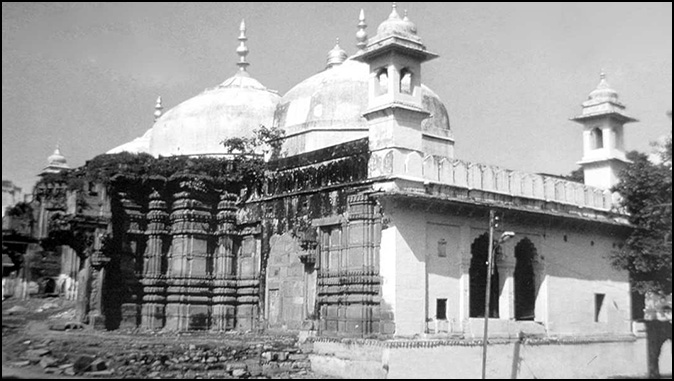 India: Ancient Hindu Symbol Found in Mosque
Could it be that a mosque was built over a temple?
By Ashlyn Davis

It has just been a little over two years since the Supreme Court of India recognized the Hindu claim to the disputed site of Ayodhya and ruled in favor of the rebuilding of the Ram Temple. The original temple was taken down by the Islamic invader Babar more than 500 years ago.

India is dotted with mosques erected after demolishing Hindu temples, and Hindutva associations are determined to reclaim them all. This time they have their eyes on the Gyanvapi Mosque, beneath which lie the ruins of an ancient temple dedicated to the Hindu deity Shiva. Aurangzeb’s troops had pulled down a portion of this 2000-year-old temple in 1669 to make room for a mosque.

The fraying walls of the “mosque,” still flaunting the ethos of the Hindu faith, bear testimony to the magnificent temple it once was. The nomenclature of the mosque is another significant giveaway. Gyanvapi translates to a pond of knowledge in Sanskrit. What are the odds that Aurangzeb, a descendant of the invader Babar, an Islamic jihadi marauder harboring intense hate for the Hindus, would name a mosque he constructed in the language spoken by the Hindu gods? The Gyavapi has been a self-evident Hindu temple all along.

The preceding pseudo-secular governments, with their natural bent towards the Muslim demography, continued to ignore the claims of the Hindu side. But the BJP gaining electoral power in 2014 turned the tables on the Muslim-pandering forces. Last month, responding to a petition by a Varanasi-based lawyer, the Apex court allowed an archaeological survey of the Kashi Vishwanath Temple-Gyanvapi mosque complex.

The third day of the court-ordered survey concluded with the discovery of an ancient monument that the experts in the survey team claimed to be the original Shivalinga (a Hindu structure representing Shiva) of the erstwhile temple. Popular folklore narrated that when Aurangzeb’s military reached Kashi to wreck the Shiva temple, the head priest carried the Shivalinga and jumped into a nearby well. He sacrificed himself to protect the Shivalinga, which reportedly has been retrieved now.

Interestingly, the survey team discovered the Shivalinga-like structure in a well submerged under a water body used as a Wujukhana inside the mosque. A Wujukhana is where Muslims wash their feet, hands, face, ears, and mouth before lining up for prayers.

This finding suggested that the revered ancient Hindu structure was desecrated for over 350 years. Many argue that the Muslims were oblivious to the presence of the Shivalinga in the Wujukhana. A survey team found an item of tremendous religious significance in just three days, and not one among the hundreds of thousands of Muslims who performed Wuju got a hint about its existence in over 300 years?

The Hindu bodies were exhilarated to find the alleged Shivaling and equally shocked to learn about the centuries-long sacrilege of their deity. But unlike those Muslims who assemble into massive murderous mobs, raid villages, and slaughter people on bogus charges of blasphemy, Hindus maintained their calm and remained composed.

One would have thought that the Hindus resorting to peace would further harmony in the society; instead, it only led to the blasphemous degeneracy of the some Muslims: journalists, political analysts, social activists, and politicians all bared their teeth and claws and attacked the benign religious sentiments of the Hindus in the country.

If draining dirty water on a sacred structure wasn’t demeaning enough, communal bigots flooded Twitter and Facebook with their pejorative remarks. News anchor Nagma Sheikh suggested that the Hindus look for their deity in the toilets; “social activist” Waqar H Bhatti likened it to a fountain, and renowned political analyst Saba Naqvi compared the Shivalinga to an atomic research center. Multiple Muslim accounts associated the Shivalinga with the male genital or pits of fruits.

In a similar vein, the Muslim body is adamant in claiming that the structure unraveled by the survey team is in a fountain and not a Hindu structure. The case is sub judice, though experts have rubbished claims of the structure being a fountain.

Despite the abject display of Islamic supremacist depravity, the Hindus have not attacked a single fellow from the Muslim community on charges of blasphemy. Neither have they called for riots or overrun any Muslim property. The collective poise shown by the Hindu community stands in stark contrast to the coordinated and organized barbarity all too many Muslims turn to at the drop of a hat. A recent example is the 2021 anti-Hindu riots of Bangladesh triggered by a mere rumor of Hindus insulting the Koran.

Yet the mainstream media has anointed the Hindus as intolerant and abusive towards the Muslims in the country, while painting the latter as the perennial victims.