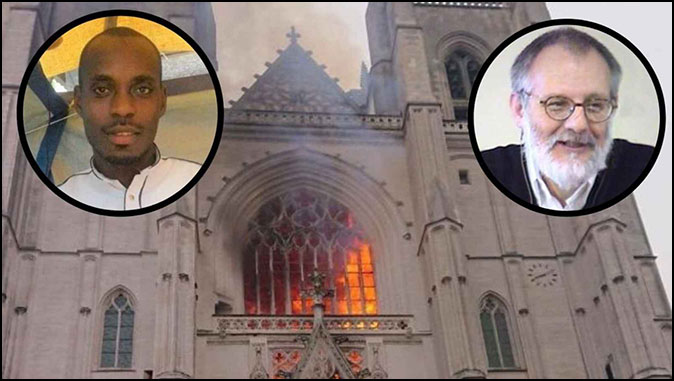 Illegal Alien Refugee Met With the Pope, Burned a Cathedral, Killed a Priest
Europeans and Americans are paying the price for Pope Francis’ support for illegal migration.
By Daniel Greenfield

Pope Francis concluded the Extraordinary Jubilee of Mercy by inviting thousands of homeless from across Europe to Rome. Many of those homeless were foreign migrants. Among them was Emmanuel Abayisenga, a Rwandan migrant, the son of a man tried for genocide, who had been in France since 2012, and finally got his chance to briefly meet with the Pope.

While reporters brandished telephoto lenses and stood on chairs to capture the moment, Pope Francis clasped Abayisenga’s arms. The Rwandan, toting a Nike backpack and headphones, appears, as local French clergy would later insist, to be, “fully integrated” into Europe.

He was also the model of the “socially deprived” people whom Pope Francis was looking for.

The Pope had urged convents and monasteries to open their doors to migrants and refugees.

“May every parish, every religious community, every monastery, every sanctuary of Europe, take in one family,” he insisted. Europeans should welcome migrants and Christians should not fear the “differences” of Muslims. He boasted that, “There are two parishes in the Vatican, and every parishioner has welcomed a Syrian family.”

“Those arriving in Europe now are fleeing from war or famine. And we are in some ways responsible, because we strip their lands for profit,” Pope Francis scolded Europeans.

While Pope Francis’ pro-migrant policies have been disastrous in America with illegal aliens spreading the coronavirus across the country, French Catholic institutions have been among the hardest hit by the Pope’s policy of sheltering illegal migrants like Emmanuel Abayisenga.

Last year the Nantes Cathedral, whose cornerstone had been laid in 1434, began to burn. The Grand Organ, over 400 years old, was destroyed along with historic stained glass windows.

Abayisenga had started two fires near the Grand Organ and a third near an electric panel.

The year after meeting with Pope Francis, Abayisenga began volunteering at the Nantes Cathedral. Like many other migrants, his asylum requests had been repeatedly turned down, but the Rwandan migrant continued to stay in the country with the support of the clergy.

“He was even the most protected man in Nantes at the ecclesial level: the parish, the Franciscans, the Secours Catholique supported him. Even the former bishop of the diocese, Jean-Paul James, tried to plead his case with the prefect,” a local churchgoer related.

But before the fire, Abayisenga had sent a threatening email complaining that church officials hadn’t done enough for his asylum petitions to allow him to stay in France and suggesting that the cathedral was possessed by a devil that needed to be driven out. Despite that he was allowed to retain his position as a warden, tasked with locking up and unlocking the cathedral.

After the fire, it didn’t take long to figure out who had done it, for the authorities to set him loose, and for the same system harboring illegal refugees to welcome him back again despite what he had done.

Abayisenga’s lawyer claimed that he “bitterly regretted” setting the fires.

“The citizens of Nantes are still angry with him, but for the most part it is empathy that dominates now,” a Cathedral official explained.

Even though Abayisenga had already been ordered to leave France four times because his asylum requests had been repeatedly denied, he was allowed to stay while awaiting trial.

After spending a month at a mental hospital, the cathedral arsonist was released and placed in an abbey under the supervision of Fr. Olivier Maire of the Montfort Missionaries. The Rwandan spent a few months there before Fr. Maire called the police because he had tried to leave.

A few more months went by and then Abayisenga murdered Fr. Maire. The illegal migrant then turned himself in for this latest horrifying crime against those who had kindly sheltered him.

Abayisenga is back in a psychiatric hospital and French authorities are claiming that nothing could have been done differently despite the four deportation orders for the illegal refugee.

“I regret the unnecessary controversies,” Gerald Darmanin, the country’s Minister of the Interior, snippily said at a press conference. As if there were no reason for people to wonder how an illegal migrant could have remained in France for nearly a decade, despite four deportation orders, and one of the most infamous arsons in a generation, before he murdered a priest.

But there is plenty of blame to go around.

For once the killer isn’t an Islamic terrorist, but the same broken system welcomed him, harbored him, failed to enforce the law, and gave him every possible opportunity to do harm.

Even after the Nantes Cathedral arson, pro-refugee organizations regaled the media with stories about his difficult childhood growing up during the Rwandan genocide (in which his father appears to have been a perpetrator). Yet despite all that, Abayisenga was apparently able to get a college degree and a good job before deciding to head over to France.

French authorities dismissed his claims to being a refugee, but they also failed to remove him.

And the clergy who sheltered him may have had the noblest motives, but failed to exercise even the most basic common sense no matter how obvious the threat that the migrant represented.

There is a good reason why countries have borders and laws. Abayisenga is a reminder of that.

Mercy and kindness are lovely qualities, but any individual, community, country, and culture must, at the barest minimum, see to its own survival, or its compassion is a suicide pact.

Pope Francis has argued that migrant rights should be prioritized over national security. He has sneered at President Trump and border security in the United States, declaring that, “builders of walls, be they made of razor wire or bricks, will end up becoming prisoners of the walls they build.” But the alternative to living securely within your walls is that your cathedrals will be burned and your priests murdered by the migrants you allowed inside your open borders.

Europeans and Americans are paying the price for Pope Francis’ support for illegal migration.

Too many people of all religions, Catholic, Protestant, and Jewish, have become prisoners of an unbalanced rhetoric of compassion that prioritizes grandiose shows of virtue signaling over the difficult human balance between protecting ourselves and helping others. In the face of such demands, we must remember that we cannot save the world if we cannot even save ourselves.

The story of the Nantes Cathedral, of Fr. Maire, and of Abayisenga is a reminder that the price of giving endlessly to enemies, exploiters, or even the unbalanced may be a butcher’s bill.

And that is a price that no country, no culture, and no civilization can endlessly afford to pay.

The Jihadist Genocide of Christians in Nigeria Intensifies

The Jihadist Genocide of Christians in Nigeria Intensifies When black lives simply do not matter.…

Ex-Muslim Reveals What the Qur’an Says About Moderate Muslims

Ex-Muslim Reveals What the Qur’an Says About Moderate Muslims Spoiler alert: it's not good. By…

Why America Failed to ‘Win Hearts and Minds’ in Afghanistan

Why America Failed to ‘Win Hearts and Minds’ in Afghanistan Our cultural blind spot. By…

Tragedy, Therapy, and the Challenge of Jihad

Tragedy, Therapy, and the Challenge of Jihad The cost of our therapeutic delusions and cultural…