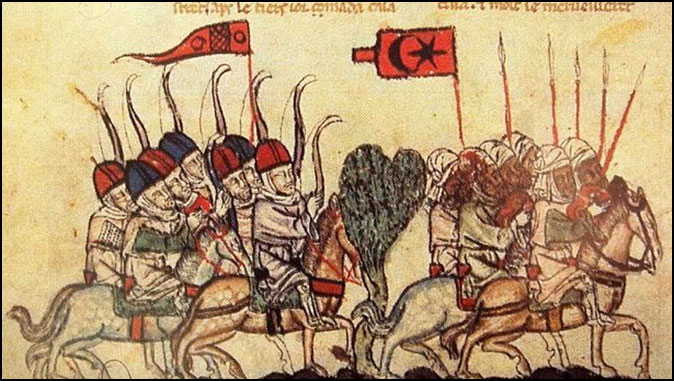 How Islam Conquered 2/3s of the Christian World
Revisiting the “most consequential battle in all world history.”
By Raymond Ibrahim

Recently in history, on August 20, 636, the single most consequential battle between Islam and the West took place — that of Yarmuk. Occurring just four years after Muslim prophet Muhammad had died, not only did the military engagement decide whether the Arabian creed thrives or dies; it became a chief source of inspiration and instruction for jihadis throughout the centuries, right down to the Islamic State. And yet, very few in the West are even aware of the Battle of Yarmuk’s existence—much less how it motivates contemporary Islamic terrorists.

The contestants were the Eastern Roman Empire, under Emperor Heraclius, and the newly born Arabian caliphate, under the second caliph, Omar. After a couple of years of Muslim depredations in then Christian/Roman Syria, the two forces met along the Yarmuk River. The pre-battle exchange between the two generals, the Roman-Armenian Vahan and Khalid bin al-Walid — Islam’s much revered (and near cannibalistic) “Sword of Allah” — is instructive:

The Christian commander began by diplomatically blaming Arabia’s harsh conditions and impoverished economy for giving the Arabs no choice but to raid Roman lands. Accordingly, the empire was pleased to provide them with food and coin on the condition that they return home. “It was not hunger that brought us here,” Khalid responded coolly, “but we Arabs are in the habit of drinking blood, and we are told the blood of the Romans is the sweetest of its kind, so we came to shed your blood and drink it.

Vahan’s diplomatic mask instantly dropped and he launched into a tirade against the insolent Arab: “So, we thought you came seeking what your brethren always sought” — plunder, extortion, or mercenary work. “But, alas, we were wrong. You came killing men, enslaving women, plundering wealth, destroying buildings, and seeking to drive us from our own lands.” Better people had tried to do the same but always ended up defeated, added Vahan in reference to the recent Persian Wars, before continuing:

As for you, there is no lower and more despicable people — wretched, impoverished Bedouins…You commit injustices in your own nation and now ours…What havoc you have created! You ride horses not your own and wear clothes not your own. You pleasure yourselves with the young white girls of Rome and enslave them. You eat food not your own, and fill your hands with gold, silver, and valuable goods [not your own]. Now we find you with all our possessions and the plunder you took from our coreligionists — and we leave it all to you, neither asking for its return nor rebuking you. All we ask is that you leave our lands. But if you refuse, we will annihilate you!

The Sword of Allah was not impressed. He began reciting the Koran and talking about one Muhammad. Vahan listened in quiet exasperation. Khalid proceeded to call on the Christian general to proclaim the shahada — that “there is no god but Allah and Muhammad is his messenger” — and thereby embrace Islam, in exchange for peace, adding, “You must also pray, pay zakat, perform hajj at the sacred house [in Mecca], wage jihad against those who refuse Allah, … and befriend those who befriend Allah and oppose those who oppose Allah,” a reference to the divisive doctrine of al-wala’ wa al-bara’. “If you refuse, there can only be war between us…And you will face men who love death as you love life.”

“Do what you like,” responded Vahan. “We will never forsake our religion or pay you jizya.” Negotiations were over.

Things came to a head, quite literally, when 8,000 marching Muslims appeared before the Roman camp carrying the severed heads of 4,000 Christians atop their spears. These were the remains of 5,000 reinforcements who had come from Amman to join the Roman army at Yarmuk. The Muslims had ambushed and slaughtered them. Then, as resounding cries of “Allahu akbar” filled the Muslim camp, those Muslims standing behind the remaining 1,000 Christian captives knocked them over and proceeded to carve off their heads before the eyes of their co-religionists, whom Arabic sources describe as looking on in “utter bewilderment.”

So it would be war: 30,000 Christian Romans against 24,000 Muslim Arabs along the Yarmuk River in Syria. On the eve of battle, writes historian A. I. Akram, “the Muslims spent the night in prayer and recitation of the Quran, and reminded each other of the two blessings that awaited them: either victory and life or martyrdom and paradise.”

No such titillation awaited the Christians. They were fighting for life, family, and faith. During his pre-battle speech, Vahan explained that “these Arabs who stand before you seek to…enslave your children and women.” Another general warned the men to fight hard or else the Arabs “shall conquer your lands and ravish your women.” Such fears were not unwarranted. Even as the Romans were kneeling in pre-battle prayer, Arab general Abu Sufyan was prancing on his war steed, waving his spear, and exhorting the Muslims to “jihad in the way of Allah,” so that they might seize the Christians’ “lands and cities, and enslave their children and women.”

The battle took place over the course of six days. On August 20, 636, the sixth and final day, a dust storm — something Arabs were accustomed to, their opponents less so — erupted and caused mass chaos, particularly for the Romans, whose large infantry numbers proved counterproductive. Night fell. Then, according to historian Antonio Santosuosso,

The terrain echoed with the terrifying din of Muslim shouts and battle cries. Shadows suddenly changed into blades that penetrated flesh. The wind brought the cries of comrades as the enemy stealthily penetrated the ranks among the infernal noise of cymbals, drums, and battle cries. It must have been even more terrifying because they had not expected the Muslims to attack by dark.

Muslim cavalrymen continued pressing on the crowded and blinded Roman infantry, using the hooves and knees of their steeds to knock down the wearied fighters. Pushed finally to the edge of the ravine, rank after rank of the remaining forces of the imperial army fell down the steep precipices to their death. “The Byzantine army, which Heraclius had spent a year of immense exertion to collect, had entirely ceased to exist,” writes British lieutenant-general and historian John Bagot Glubb. “There was no withdrawal, no rearguard action, no nucleus of survivors. There was nothing left.”

As the moon filled the night sky and the victors stripped the slain, cries of “Allahu akbar!” and “There is no god but Allah and Muhammad is his messenger” rang throughout the Yarmuk valley, the Arabian chronicler narrated.

Mere decades after Yarmuk, all ancient Christian lands between Syria to the east and Morocco to the west — nearly 4,000 miles — had been conquered by Islam. Put differently: Two-thirds of Christendom’s original, older, and wealthier territory was permanently swallowed up by the scimitar of jihad. (Eventually, and thanks to the later Turks, “Muslim armies conquered three-quarters of the Christian world,” to quote historian Thomas Madden.)

But unlike the Germanic barbarians who invaded and conquered Europe in the preceding centuries, only to assimilate into the religion, culture, and civilization of Christianity, and adopt its languages, Latin and Greek, the Arabs imposed their creed and language onto the conquered peoples so that, whereas the “Arabs” were once limited to the Arabian Peninsula, today the “Arab world” consists of some 22 nations across the Middle East and North Africa.

This would not be the case, and the world would have developed in a radically different way, had the Eastern Roman Empire defeated the invaders and sent them reeling back to Arabia. Little wonder that historians such as Francesco Gabrieli hold that “the battle of the Yarmuk had, without doubt, more important consequences than almost any other in all world history.”

Moreover and as the alert reader may have noticed, the continuity between the words and deeds of the Islamic State in Iraq and Syria (ISIS) and those of its predecessors from nearly 1,400 years ago are eerily similar. This of course is intentional. When ISIS proclaims that “American blood is best and we will taste it soon,” or “We love death as you love life,” or “We will break your crosses and enslave your women,” they are quoting in verbatim — and thereby placing themselves in the footsteps of — Khalid bin al-Walid and his companions, the original Islamic conquerors of Syria.

Similarly, ISIS’s invocation of the houris, Islam’s celestial sex-slaves promised to martyrs, is based on several anecdotes of Muslims dying by the Yarmuk River and being welcomed into paradise by these immortal concubines. So too is the choreographed ritual slaughter of “infidels,” most infamously of 21 Coptic Christians on the shores of Libya, patterned after the ritual slaughter of 1,000 captured Roman soldiers on the eve of battle.

Here, then, is a reminder that, when it comes to the military history of Islam and the West, the lessons imparted are far from academic and have relevance to this day — at least for the jihadis, whose mindset many in the West still refuse to acknowledge.

Note: The above account was excerpted from Raymond Ibrahim’s Sword and Scimitar: Fourteen Centuries of War between Islam and the West.

New Zealand Police Let a Jihadi Stab Six People They were tracking his every move.…