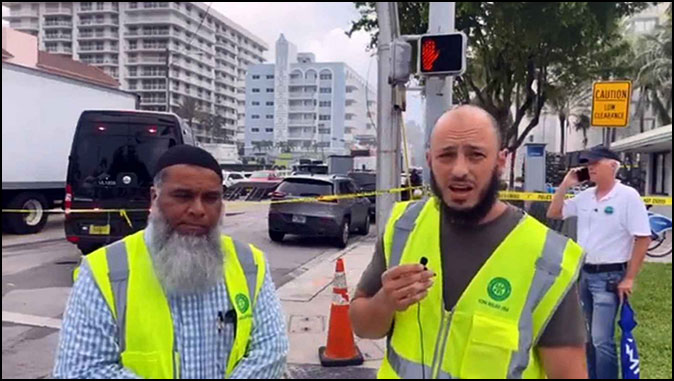 Joe Kaufman is a Shillman Journalism Fellow at the David Horowitz Freedom Center and the Chairman of the Joe Kaufman Security Initiative. He was the 2014, 2016 and 2018 Republican Nominee for U.S. House of Representatives(Florida-CD23).

Days after the 9/11 attacks, the Council on American-Islamic Relations (CAIR) solicited funds for the Hamas-tied Holy Land Foundation (HLF), on the homepage of CAIR’s national website, insidiously masking the donations as money going to a “NY/DC Emergency Relief Fund.” Less than three months later, HLF was shut down for funneling millions of dollars to Hamas. CAIR exploited a tragedy for sinister purposes. This past month, it happened again, with the collapse of a residential building in Surfside, Florida. This time, the culprit was the Islamic Circle of North America (ICNA), using the disaster as a way to advertise and raise money for ICNA.

ICNA is the American arm of South Asian Islamist group, Jamaat-e-Islami (JI), and has interaction with terrorist outfits overseas, including Lashkar-e-Taiba (LeT). In August 2006, ICNA was partner (still is) and donor to JI’s Al-Khidmat Foundation (AKF), when AKF took a delegation to the Damascus, Syria home of then-Hamas leader, Khaled Mashal, to hand him $100,000 for terrorism against Israel. For over three decades, ICNA has harbored death squad leader Ashrafuz Zaman Khan within its highest ranks. Though still with ICNA in the US, Khan himself was sentenced to death for the murder of 18 individuals in what is today Bangladesh.

In October 2000, on the homepage of ICNA’s South East Region website, ICNA promoted links to the official websites of Hamas, Hezbollah and the Taliban. Under the links was a directive from then-ICNA President Mohammad Yunus asking fellow Muslims to provide “material support” to what appeared to be Chechen militants linked to al-Qaeda. It stated, “Remember Your Fellow Chechnyan Muslims… We must show our spiritual and material support for our brothers and sisters being oppressed by the brutal Russian forces.” Immediately following the message was a link to qoqaz.net, a financing and recruitment website for al-Qaeda.

On June 24th, Champlain Towers South, a 12-story beachfront condominium in the Miami suburb of Surfside, Florida, partially collapsed, leaving a multitude of victims. As of this writing, the death toll stands at 97 with dozens of people still unaccounted for.

The following day, ICNA posted videos on social media depicting their local representatives on the scene of the building collapse, all donning public safety vests (complete with ICNA logos) to look the part. One video begins, “My name is Mohamed Dahsheh, and I am part of the disaster relief response team, here in South Florida… They did let the disaster relief team of ICNA Relief here, into the ‘ground zero,’ and we’re trying to assess the situation.” Behind him, in the background of the video, members of a search & rescue team with dog are readying themselves to face the aftermath of the tragedy, unaware of ICNA’s motives or of their being used as props.

Dahsheh then goes on to do a ‘sales pitch’ for ICNA Relief. He states, “If you want to support the relief efforts, you can go to icnarelief.org, and donate whatever you can to our disaster relief services team department, so we can be able to extend more resources… The more resources you have, the more help you can give to those who are in need. We also work with FEMA. We work with national VOAD. We’re working with the Florida VOAD, in this particular response effort.”

A second video has Dahsheh – now accompanied by another ICNA rep, Raymond Durgana – basically saying the same thing, referring to their group as “the disaster relief team of ICNA Relief,” claiming that they are “collaborating” with the Florida office of Voluntary Organizations Active in Disaster (VOAD) and FEMA, and asking for donations to ICNA “for these relief efforts.” On the video, Dahsheh states about Durgana, “I’m here today with Brother Raymond Mohamed, which is the newest edition to the South Florida ICNA Relief staff, and he is part of the disaster relief team now.”

One might ask how a group that is so closely associated with terror, as ICNA is, could play any role in that of a “disaster relief team” or a “disaster relief response team.” Does this group have credentials beyond wearing yellow vests with reflective strips or is this merely a Jamaat front looking to cash in on death and destruction?

Dahsheh, Durgana, and Tahsin Nabid, the individual who filmed the video, all hold the position of “Outreach Coordinator” for ICNA Relief. Durgana, as well, works for the ICNA Relief Food Pantry. And Dahsheh, just this past May, was handing out cheap backpacks to kids in cars for ICNA, while the group was set up outside Masjid Jamaat Al-Mumineen (MJAM), a Margate, Florida mosque that promotes material on its website labeling Jews and Christians as “enemies of Islam” and calling for violence against women and gays. It is highly unlikely that any of these men have the expertise necessary for disaster relief.

Linked onto the social media posts of ICNA’s Surfside and MJAM videos are Samikh Sahadat, the Southeast Regional Coordinator of ICNA Relief, and Abdul Rauf Khan, the Chief Operating Officer of ICNA Relief USA and Secretary of ICNA Florida. Sahadat is a former student at Pembroke Pines, Florida’s Darul Uloom Institute (DUI), which makes him a fellow alumnus of a number of al-Qaeda operatives, including “Dirty Bomber” Jose Padilla. Khan is a fan of rabid anti-Semite Louis Farakhan and has used his Facebook page to target Jews and homosexuals and promote Jamaat-e-Islami and the Muslim Brotherhood.

It makes no sense whatsoever to allow ICNA, a group associated with terror (and bigotry), access to sensitive areas, such as the scene of the building collapse in Surfside. By granting ICNA access to ‘ground zero,’ as ICNA’s Mohamed Dahsheh termed it, legitimizes ICNA and assists the group in raising money on the backs of the Surfside building’s victims and their families. It is furthermore outrageous that government agencies like FEMA and non-profit collaborations like VOAD would work in any capacity with ICNA, as they seem to be doing. No organization with links to terror should exist, let alone reap rewards for their evil.

ICNA’s cynical and perverse exploitation of the Surfside tragedy to raise money and provide a background for a deceptive ‘photo op’ is indicative of their mercenary endeavor and more than enough reason for the group to cease operations.