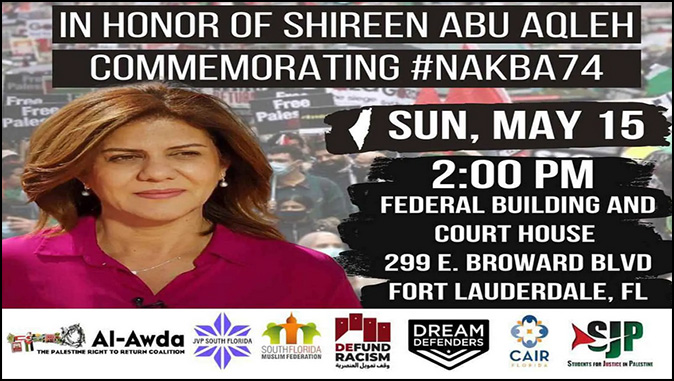 From ‘We are Hamas’ to ‘Death to Israel’ – Same Old CAIR
When Muslim advocacy translates to killing Jews.
By Joe Kaufman

According to Nihad Awad, co-founder and Executive Director of CAIR, the group was created with a goal to “combat anti-Muslim discrimination.” This, however, was merely a public face for CAIR meant to conceal its real mission: to assist in the annihilation of Israel. Nearly 30 years later, CAIR is still obsessed with ending the Jewish state. Last month, the group co-sponsored a rally in Fort Lauderdale that was billed as a way to honor deceased Al Jazeera reporter Shireen Abu Akleh, who was shot and killed while covering the Israeli-Palestinian conflict. But the event quickly devolved with calls for Israel’s destruction, displaying once again the true face of CAIR.

CAIR was launched, in June 1994, as a part of the Palestine Committee (in America) and under the guidance of then-global Hamas leader Mousa Abu Marzook. The main national leaders of CAIR came to the group via the Islamic Association for Palestine (IAP), which was also a Palestine Committee member and which acted as a propaganda wing for Hamas. In 2007 and 2008, CAIR was named a party to the US federal trials against the Holy Land Foundation (HLF), another Palestine Committee member and a Hamas financier. CAIR used its websites to raise funds for HLF, and CAIR’s Texas chapter founder, Ghassan Elashi, was HLF Board Chairman.

Like CAIR-Texas, the Florida chapter of CAIR has not strayed far from CAIR’s anti-Israel and anti-Jewish fanaticism. In July 2014, CAIR-Florida co-sponsored a pro-Hamas rally in Downtown Miami, where rally goers repeatedly shouted, “We are Hamas” and “Let’s go Hamas.” After the rally, the event organizer, Sofian Zakkout, wrote in Arabic, “Thank God, every day, we conquer the American Jews like our conquests over the Jews of Israel!” The following month, then-CAIR-Florida Executive Director Hassan Shibly tweeted, “God as my witness, Israel & its supporters are enemies of God and humanity…”

On May 15th, an anti-Israel demonstration was held in downtown Fort Lauderdale. Co-sponsors of the event included CAIR, Al-Awda, and Students for Justice in Palestine (SJP), groups that have an irrational fixation with Israel’s existence. The flyer for the rally features a large image of Shireen Abu Akleh, the Al Jazeera reporter who was recently shot and killed in Jenin, allegedly by IDF fire (though the PA has refused to hand over the bullet to Israel for forensic analysis). A known figure on Arab TV, Israel bashers have used Abu Akleh’s death as a vehicle to condemn Israel and even to call for Israel’s destruction. That appeared to be the case at the May event.

Video footage taken at the protest shows numerous participants adorned in Palestinian garb and flags. One girl, standing next to the protest leader, wore a shirt with an image of Palestinian female terrorist icon Leila Khaled clutching a rifle with the words “Resistance is not terrorism” under it. Khaled was a plane hijacker for the Popular Front for the Liberation of Palestine (PFLP), a US banned terrorist group. The protesters repeatedly chanted “From the river to the sea, Palestine will be free,” a Hamas and PFLP-inspired anthem calling for the complete elimination of Israel (through violent means) from the Jordan River to the Mediterranean Sea.

In April 2010, just three months prior to the ADL’s condemnation of AMANA, an article was published written by Ruiz vilifying the Jewish religion, titled Las fobias de mi vecino (translated “My neighbor’s phobias”). In it, Ruiz cites Justinas Pranaitis, a Lithuanian Catholic priest who was infamous for advancing a blood libel claim against Jews and who was stripped of his priesthood. In the piece, Ruiz further provides a link to talmudunmasked.com, a website that contains Pranaitis’s antisemitic conspiracies and is produced by those alleging Jews are Satanic and perpetrated the 9/11 attacks.

During the May 15th protest, more than three-quarters of the way through the video footage, Ruiz turned the camera abruptly toward the street and, after a brief pause, appeared to shout, in his thick Puerto Rican accent, “Death to Israel. Death to Israel.” No doubt, Ruiz, like the Islamist organizations he represents, possesses an extreme hatred for the Jewish state, regularly declaring his support for the bigoted BDS boycott movement and vindictively referring to Israel as “Apartheid Israel.”

The chants of “We are Hamas” and “Death to Israel,” at CAIR sponsored events, are proof that CAIR is still clinging to its Palestinian terrorist roots. CAIR may claim that it is a Muslim advocacy group that wishes to combat discrimination, but time after time, Israel – or more appropriately Israel’s annihilation – is what the organization cares most about. Fighting discrimination is just a veil to conceal CAIR’s sinister reality.