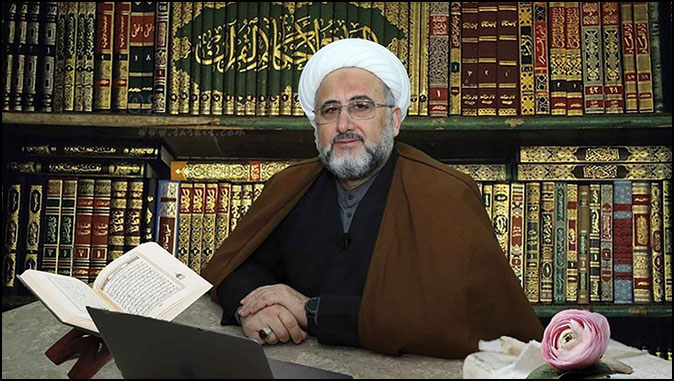 Mohamad Al-Ali Al-Halabi is the imam of the American Islamic Center of Florida (AICF), located in Pompano Beach. Since immigrating to the United States in 1999, Al-Halabi has become an important figure in the American Shiite community. However, it is what he did before coming to the US that is of the most interest. This month, Al-Halabi took to social media to reminisce about the past, dredging up old grievances as they relate to Israel, a nation he despises and was once recruited to fight against. He went as far as to embrace his friend’s words erasing Israel from existence. With his violent history and vengeful designs, why does Al-Halabi remain in the US?

On October 6th, Syrian-born Al-Halabi, in a lamentation about the status of Israel, remembered the Yom Kippur War, when a coalition of Arab nations, exactly 48 years earlier, in October 1973, jointly launched a surprise attack against Israel on the holiest day on the Jewish calendar, Yom Kippur. By the end of the war, Israel had humiliated those she was fighting with a lopsided victory.

Al-Halabi began by posting on his Facebook page the following in Arabic: “October is an event that remains in memory. But today, Israel is the victor, and its slogan, which was from the Euphrates to the Nile, is today, from the Atlantic to the Persian Gulf.”

“From the Euphrates to the Nile” is a factually unfounded and mostly Arab conspiracy theory that alleges that it is the goal of the government of Israel to obtain wide-ranging borders that are derived from the Jewish Bible, which would span all of Lebanon and Jordan and significant parts of Iraq, Syria, Saudi Arabia and Egypt. “From the Atlantic to the Persian Gulf,” on the other hand, indicates the intention of a takeover of more than half the world.

Al-Halabi said that, as a result of the 1973 war, “Israel took revenge and succeeded in returning the lands that were liberated in the days of war and worked to put Arab regimes under its armpits.” The reference, of course, was the giving back of the Sinai to Egypt in return for peace. Today, Al-Halabi is concerned that recent alliances Israel has had with different Muslim countries will allow Israel to further grow in strength and prominence.

Abo Ali, a Facebook ‘friend’ of Al-Halabi’s from Damascus, who seems to know Al-Halabi personally, took offense to any notion of an Israeli victory. He told Al-Halabi that he, Al-Halabi, was “incorrect” in his assessment and proceeded to call for Israel’s destruction. He wrote, “Israel is weaker than the spider’s house and soon to disappear. But you will discover this fact when you return to your country that I need you in these difficult days,” to which Al-Halabi clicked ‘like.’

Al-Halabi later clicked ‘like’ on a post that declared, “[H]ypocritical and coward governments delay Israel’s demise.” He, as well, made the farfetched claim – using an anti-Semitic trope – that “Israel rules the whole western world.”

The fanatical hatred and visceral anger that Al-Halabi exhibits towards the Jewish state did not suddenly materialize overnight. Indeed, Al-Halabi has been living with these destructive emotions and ambitions for many decades.

According to a June 2010 posting al-Halabi made on Facebook, following Israel’s invasion of Beirut, Lebanon in 1982, al-Halabi had found himself at a recruitment office to be trained in how “to defend Lebanon” from what he calls “the Israeli enemy.” He said, when asked why they were there, he and the others had one answer: “We want to fight, and we want to liberate Lebanon and Palestine. We want to die with dignity.”

After the Israeli siege against the Palestine Liberation Organization (PLO) in Beirut, the government of Iran put up money to pay for recruitment centers for a new militant organization made up of religious Shiites named Hezbollah or Party of God, and its focus was in carrying out guerilla warfare against Israelis, who were conducting military activities in Lebanon.

Al-Halabi mentioned that, at the back of the volunteer line at the recruitment office, there was a “helpless” and “crippled” man, who told him that he had been “a survivor of the October war.” At the time, a large percentage of the Beirut population was Palestinian. The “October War” that the crippled man was speaking of was the Yom Kippur War.

Shortly after the recruitments, in October 1983, a little over one year following Israel’s siege, Hezbollah staged an attack against US Marine barracks stationed in Beirut, killing 241 American servicemen.

Al-Halabi’s beloved nephew, Ahmed Ali Al-Haji, is a recent member of Hezbollah, stationed in Syria. Along with pictures of Hezbollah Secretary General Hassan Nasrallah, Al-Haji has posted on social media photographs of himself dressed in fatigues, holding various rifles, and driving a Jeep with a rocket launcher. In February 2015, next to a graphic of a Hezbollah logo appended to a militant readying himself to shoot, Al-Haji wrote, “We are proud to be Hezbollah… From Syria the lion.” Al-Halabi, who has also posted images of Nasrallah on his own social media, wrote under Al-Haji’s post in Arabic, “May God protect you and grant you victory…”

Why is Mohamad Al-Halabi still in America and leading a mosque with impunity? It is a legitimate question to ask. His association with Hezbollah, a US-recognized terrorist organization, should have disallowed him from entering our shores. Yet, he has been here for over two decades. His Facebook ‘friend’ suggested he go back, and certainly it is time he does – for good – as a deportee.

Additionally, given his extremist past, hate-filled present, and support for Hezbollah, authorities would be well advised to monitor AICF and Al-Halabi’s activities there.

The Real Injustice at the Heart of Islamic Apologetics

Western Immigration Policy: Assimilation or Reverse Assimilation? When illusions create a recipe for disaster. By…