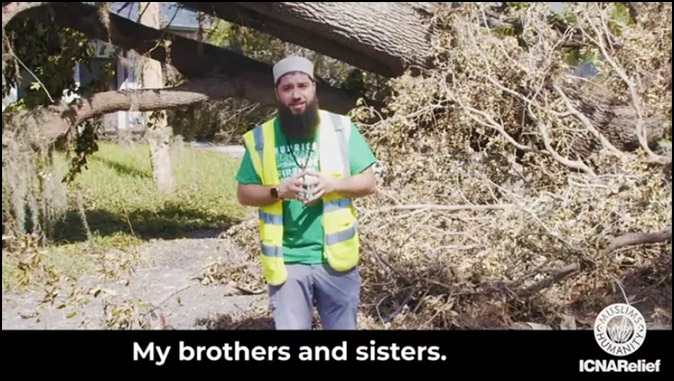 Over the course of the past year, I have composed a number of articles related to Muslim leader Hassan Shibly and his alleged physical and mental abuse of his wife, Imane Sadrati. Sadrati’s accusations against Shibly led to his resignation from his job with the Hamas-linked Council on American-Islamic Relations (CAIR). On November 14, 2022, FrontPage Magazine published a report of mine discussing how another group, the Islamic Circle of North America (ICNA), hired Shibly to partake in a series of fundraising videos, despite the allegations leveled against him. Shibly responded, crying “Islamophobia.” The following will show why my concerns were valid.

If one were to look up the term ‘Muslim extremist,’ one could easily imagine seeing Hassan Shibly’s picture next to it. For years, his name was found on the federal ‘terrorism watch list.’ He has described Hezbollah as “basically a resistance movement” and “absolutely not a terrorist organization.” From 2019 till now, he has been trying to get ISIS bride Hoda Muthana, who threatened President Obama’s life, to be let into the US. In May 2021, he posted a viciously anti-Semitic video on Instagram, telling Israeli Jews to “go back to Europe.” And in October 2021, Shibly advocated for female al-Qaeda operative Aafia Siddiqui to be freed from prison.

This past November, Shibly made several posts on social media sharing ex-Guantanamo Bay prisoner Mansoor Adayfi’s wild claims that then-US military officer and current Florida Governor Ron DeSantis played a role in the torture of Guantanamo prisoners. According to a June 2008 Department of Defense memorandum, Adayfi – the individual Shibly was proudly quoting – “is an admitted member of al-Qaida who possessed prior knowledge of the 11 September 2001 attacks as well as other planned attacks against US interests” and who was part of a “small group” tasked by Osama bin Laden “to establish an al-Qaida base of operations in Yemen.”

In December 2020, Shibly’s then-wife, Imane Sadrati, created a GoFundMe page publicly claiming that Shibly emotionally/physically abused her, while she was pregnant and in front of their kids. As well, during a 911 call to police, Sadrati confided that Shibly had been “beating” her “for 12 years” and accused him of threatening to kill her. According to court documents, during one purported incident, Shibly “twisted Sadrati’s arm, slapped her and shoved her against a wall.” As a result, Shibly resigned from his position as Executive Director at CAIR-Florida. At the time, Shibly was one of the most prominent leaders of CAIR, nationwide.

This past October, Shibly was featured in videos sponsored by ICNA Relief, the social services division of ICNA. The article that I wrote for FrontPage, titled ‘Ex-CAIR Hassan Shibly’s New Terror-Linked Shills, ICNA and MAS,’ was in response to both ICNA and the Muslim American Society’s (MAS) embrace of Shibly so soon following his domestic violence scandal and his abrupt departure from CAIR.

Shibly reacted to my piece with a disdainful post on Twitter. His post evasively left out anything regarding his scandal and attempted to cancel all my information – every bit of which was backed up by proof – with the bogus “Islamophobia” label. He wrote, “LOL I love how the Islamophobia’s publish regular hit pieces highlighting all the charitable work Allah blesses me to do as if it’s a bad thing.”

The “charitable work” Shibly is most probably referencing is the fundraising he was doing on the videos to, according to ICNA, assist Florida victims of Hurricane Ian. While this would normally be viewed as a virtuous cause, ICNA, it must be noted, is a radical Muslim organization, and any charitable work that is done with or for ICNA should be considered tainted by terrorism.

ICNA is an active partner/donor to the Pakistani Hamas financier Al-Khidmat Foundation (AKF). ICNA has promoted Falah-e-Insaniat Foundation (FIF), a banned front for Lashkar-e-Taiba (LeT), the culprit of the 2008 Mumbai terror attacks. ICNA has spent over 30 years harboring and placing in top ICNA leadership positions Ashrafuzzaman Khan, a death squad commander from the 1971 Bangladesh genocide. ICNA Relief USA’s Government Affairs Coordinator, Syed Ammar Ahmed, once joked about threatening to blow up a school. And the ex-webmaster for ICNA’s Southeast division, Syed Khawer Ahmad, was a website designer for Hamas.

Of course, Shibly does not wish for any of this to be written about or spoken of. Given his own level of fanaticism, why would he? He just conveniently dismisses any exposure as “Islamophobia.”

However, it is not “Islamophobia” to point any of this out. Nor is it Islamophobia to discuss Shibly’s alleged domestic violence or to question why any group would wish to associate with him so soon after his scandal. These are legitimate concerns that should be examined and investigated.

ISIS Bride Wanted to See Americans Killed, But Hey, Now She Misses Alabama This would…