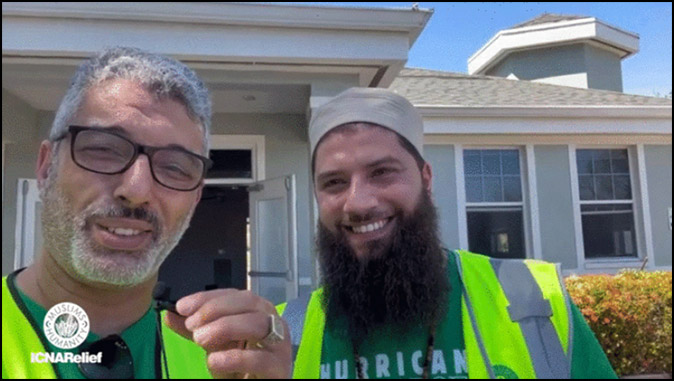 In December 2020, a prominent leader from the Hamas-linked CAIR, Hassan Shibly, was accused by his then-wife, Imane Sadrati, of domestic violence, Sadrati claiming that Shibly emotionally/physically abused her, including while she was pregnant and in front of their kids. During a 911 call to police, she confided that he had been “beating” her “for 12 years.” As a result, Shibly resigned from CAIR. Since then, though, other Islamist groups have embraced him, most recently the Islamic Circle of North America (ICNA) and the Muslim American Society (MAS). Their disregard for the alleged violence is disturbing, yet a central part of their nature.

Outside the alleged abuse of his wife (and others), Shibly is still not close to being virtuous. For years, Shibly’s name has been found on the federal ‘terrorism watch list.’ Shibly has described Hezbollah as “basically a resistance movement” and “absolutely not a terrorist organization.” In February 2019, Shibly tried to get ISIS bride Hoda Muthana, who had threatened President Obama and Americans’ lives, to be allowed into the US. In May 2021, he posted a viciously anti-Semitic video on Instagram, telling Israeli Jews to “go back to Europe.” And in October 2021, he spoke at a rally calling for female al-Qaeda operative Aafia Siddiqui to be freed from prison.

However, none of this – not the alleged wife beating nor the defense of terrorists – has stopped Islamist outfits from welcoming Shibly with open arms. Ironically, this includes events centered on themes dealing with family and children.

This past March, the Southeast Texas Islamic Society (STIS) brought Shibly in as a speaker for its ‘Family Night Dinner.’ Also speaking was STIS imam Yasir Usmani, who voices/produces videos containing anti-Semitic Islamic tropes, such as that Allah turned Jews into “apes” and that Jews have “earned wrath upon wrath.” One of the event coordinators was Khalid Hamza, an ex-professor at Florida Atlantic University (FAU), who was denied tenure for “misstating his qualifications on his resume” and “unprofessional behavior.” Hamza co-founded the Islamic Center of Boca Raton (ICBR) with persons linked to Hamas and Palestinian Islamic Jihad (PIJ).

In April, the American Youth Academy (AYA), a Tampa, Florida Muslim children’s school founded by PIJ operatives, including convicted terror leader Sami al-Arian, held a gala to raise money for and commemorate a new AYA athletic center, part of a recent multi-million dollar expansion project. Taking on the role of fundraiser for the gala was Shibly, who used the occasion to praise AYA’s founders. Assisting Shibly with the fundraising was al-Arian accomplice and fellow convicted PIJ operative Hatem Fariz, who runs the Islamic Community of Tampa (ICT), a mosque associated with AYA and as well founded by al-Arian.

Last month, ICNA – like CAIR, a nationwide Islamist group – got Shibly to star in videos asking for money to assist Florida victims of Hurricane Ian. ICNA regularly raises funds off of US and abroad tragedies and natural disasters. ICNA’s relief projects, at times, lead the group to partner with entities linked to terrorism. ICNA has been a top donor and partner to the Pakistan-based Al-Khidmat Foundation (AKF), while AKF was actively financing Hamas and meeting with Hamas leadership. ICNA has also promoted Falah-e-Insaniat Foundation (FIF), a known front for Lashkar-e-Taiba (LeT), the group responsible for the 2008 Mumbai terror attacks.

Shibly is not the first controversial figure to be associated with ICNA. In August 2019, the organization hired Syed Ammar Ahmed, an individual who once joked about threatening to blow up a school, as ICNA Relief USA’s Public Relations and Government Affairs Coordinator. Indeed, ICNA has harbored, for over three decades, Ashrafuz Zaman Khan, a death squad commander from the 1971 Bangladesh genocide, who not long ago was sentenced to death overseas in absentia for the murders of 18 people. Khan has served as Vice President of ICNA national and President of ICNA’s New York chapter.

Furthermore, ICNA has and continues to promote domestic violence against women, via its WhyIslam Islamic outreach (dawah) division. The WhyIslam website contains a text (based on the Quran), titled Gender Equity in Islam, which says that, in the case of disobedient wives, if all else fails, their husbands should discipline them by striking them. It states, “As to those women on whose part you fear disloyalty and ill conduct, admonish them (first), (next) refuse to share their beds (and last) beat them (lightly).” The essay was written by Jamal Badawi, an individual who (along with Shibly’s CAIR) was named a party to Hamas financing by the US government.

Also in October, Shibly participated in an on-stage discussion with Minnesota Attorney General Keith Ellison, at the 2022 MAS convention held in Minneapolis. MAS was established by Muslim Brotherhood (MB) operatives, in 1993. In September, MAS mourned the death of MB spiritual leader Yusuf al-Qaradawi, who had been affiliated with MAS, for years, via its now-defunct Michigan-based Islamic American University (IAU). Since its founding, MAS has had a number of terror-linked leaders, including ex-MAS Executive Director Mazen Mokhtar, a former manager for the now-defunct al-Qaeda recruitment site, qoqaz.net, and supporter of suicide bombings.

When questioning why STIS, AYA, ICNA or MAS would allow someone like Hassan Shibly to have involvement with their events or projects, we must find the common thread that binds them all, and that is that they each are associated with Muslim extremism. When a group is linked to terrorist entities like al-Qaeda, Hamas, PIJ or the Muslim Brotherhood, it seems logical that they would want people within their realm who are related to violence, themselves.

Shibly is coming from the Hamas-linked CAIR and has allegedly physically abused his wife. As such, he embodies the Islamic extremist ideal and is the perfect candidate for employment and involvement with such organizations.