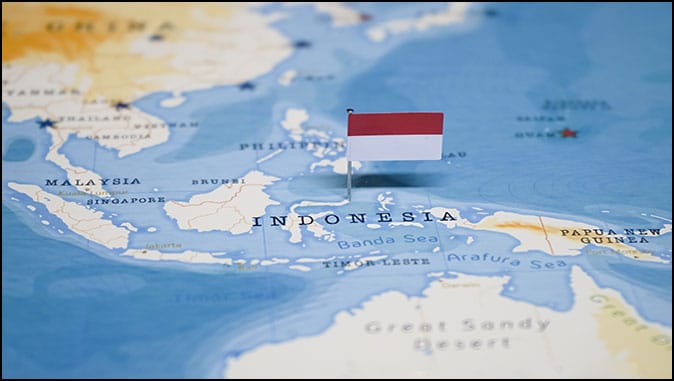 A man and a woman in Indonesia’s Banda Aceh city, on Wednesday, November 10, were given 17 lashes publicly for having an extramarital affair, which is a moral offense as per Sharia, which is enforced in the city. The man and the woman were individually brought into the area, which is features a gallery with rows of seats arranged to accommodate an audience that can witness this punishment. The accused were made to bow and then taken to a red carpet for the execution of the punishment. The Algojo, a Sharia police officer designated to carry out corporal punishments, dressed from head to toe in a brown robe with a white stripe running across it, with just two holes for his eyes, chose from three canes provided to strike the offenders.

The audience in the gallery was recording the punishment session. The woman was covered in a while burqa and wore a face mask for Covid-19 protocols. However, she dropped on the floor after being struck a few times, and was attended by the policemen and women standing nearby. The man, on the other hand, stood straight looking at the audience during his turn.

Though flogging is not an accepted means of punishment in Indonesia, it is still practiced widely and routinely in the ultra-conservative province Aceh; Banda Aceh is the capital city of Aceh. The province had been suffering from a separatist insurgency for many years. To quell the political unrest, the central government of Indonesia in 2001 granted Aceh provincial status. It was during this time that Aceh adopted the Islamic law of Sharia as the governing law of the province. Sharia would be implemented for any “crime” for which there was no provision in the secular penal code, for actions that went against the rules of Islam.

Any moral offense, such as like homosexuality, gambling, drinking alcohol, closeness between people of the opposite gender if not related or married, or public display of affection is eligible to be tried under Sharia.

Though in 2018, the Aceh Provincial Government in Indonesia decided to cease public flogging and both men and women sentenced to flogging would receive their punishment within the four walls of a prison, flogging in full public view continues to be practiced, and people gather to witness this brutality with great enthusiasm as well.

One may or may not be guilty of the “crime” of which one is accused; if the Sharia police decide that one has crossed the line, one has done so. Unfortunately, this is applied even to the non-Muslims in the state. Regardless of how much religious independence Muslims in Christian, Buddhist or secular countries enjoy, and how many special privileges they demand in non-Islamic lands, if a non-Muslim is in an Islamic land, he must abide by Islamic ways.

And that is why two Christian men were publicly flogged 40 times each for flouting the Sharia by consuming alcohol in February 2021. In fact, Aceh has publicly canned several “defaulters” in 2021, despite the government’s resolution against this act. In January, two gay men, aged 27 and 29, were given 77 lashes each after being caught indulging in homosexual activities. This was a rather lenient penalty, as a gay couple had been sentenced to 83 lashes each in May 2018, and another couple had endured 87 lashes individually just a couple of months later. Same-sex couples may be punished with up to 100 lashes each, as per the law of this land.

What else can award you lashed? Hugging. Two teens caught hugging in public were given 17 lashes each for this “offense,” right outside a mosque, with a hundred-strong audience enjoying the spectacle.

The Aceh administration has zero tolerance for “inappropriate behavior.” Hence, the province administration in August 2018 issued a circular informing its residents that unmarried men and women who are not close relatives will be prohibited from sitting at the same table at restaurants, cafes, and other public dining facilities, as that is “sinful according to Shariah law.” Facility owners were also apprised of the new law.

This law came into effect months after a young woman and her boyfriend were found to be too close in public, which according to Sharia, is a sign of premarital sex. Both were caned 20 times in front of a cheering audience. Such canings are very common in Aceh, as one can never know exactly how close is too close and comparable to sex.

Also, an unfounded allegation of being involved in prostitution can land a woman in front of a sadistic audience cheering as she gets whipped. Men can be subjected to public lashes for reasons as trivial as missing the special Islamic prayers on Friday.

To a reader reading outside Aceh, this may appear inhumane, something from the Middle Ages. Indonesia’s President Joko “Jokowi” Widodo has also called for outlawing the practice of caning. However, this is what the people of Aceh like to be see, so this practice is here to stay.

Don’t Be Cruel: Elvis Gets 16+ Years in Prison for Aiding ISIS

Don’t Be Cruel: Elvis Gets 16+ Years in Prison for Aiding ISIS Another American jihadi.…

“Christians Enjoy No Rights in This Country”: The Persecution of Christians, October 2021

"Christians Enjoy No Rights in This Country": The Persecution of Christians, October 2021 By Raymond…