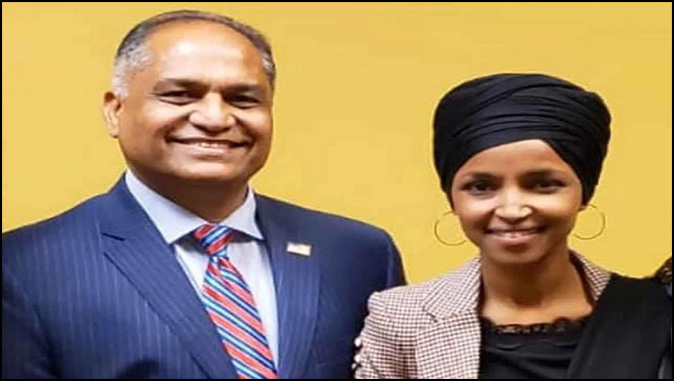 Congresswoman Omar Poses for Photo with ‘America is Run on Hate’ Guy
Imtiaz Mohammad cozies up to politicians, while belittling the US and its citizens.
By Joe Kaufman

Politicians take photos with a lot of people, and sometimes they wish they hadn’t. Given his statements belittling the US and her citizens, photos taken with Imtiaz Mohammad, founder of the American Muslim Progressive Caucus (AMPC), are probably ones that some office holders would wish they could take back. Yet, time and again, politicians smile and cozy up to him, lending themselves and their images to be shared on his social media. This was the case, when US Representative Ilhan Omar came to South Florida to speak at a CAIR event, and it has been the case for many others. Question: Do they agree with Mohammad’s contemptable views?

Imtiaz Ahmad Mohammad grew up in the Hyderabad area of Pakistan and arrived in the United States in 1991, first settling in New York, then Florida. Since coming to Florida, Mohammad has been involved in a number of ventures. He runs a plethora of South Florida beauty salons. In 2015, he incorporated and published a South Asian oriented monthly magazine, Pak Mag, which changed its name to Asian Times, in 2017, and which dissolved in 2018. He has also involved himself in the Democratic Party and different progressive causes, such as defunding police and abolishing ICE, and he had a couple of failed attempts at running for statewide office.

As well, Mohammad has attended and spoken at a number of events organized by the Islamic Circle of North America (ICNA), a group with several ties to South Asian extremism and which Mohammad calls “a humanitarian champion.” For 30-plus years, ICNA has harbored alleged death squad leader Ashrafuz Zaman Khan from the 1971 Bangladesh Genocide, and ICNA has promoted Falah-e-Insaniat Foundation (FIF), a banned front for Lashkar-e-Taiba (LeT). ICNA has further sponsored anti-Israel events, including a July 2014 pro-Hamas rally in downtown Miami, where rally goers repeatedly chanted “We are Hamas” and “Let’s go Hamas.”

In January 2017, Mohammad was a contact for tickets to an ICNA benefit dinner, featuring Hamas operative Monzer Taleb and community activist/agitator Linda Sarsour, whom Mohammad calls “a remarkable American Muslim.” Taleb has notoriously sung songs threatening Jews, and in June 2019, he posted a message on Facebook that Jews in Israel “should be relocated to Germany.” Sarsour, whose own antisemitism has been widely reported, in September 2019, was forced to resign from her position as National Organizer and Co-Chair of the Women’s March, due to her alleged embrace of bigotry against Jews and LGBTQ.

In November 2018, Mohammad referred to former Muslim community leader Nezar Hamze as “an American Muslim hero.” For years, Hamze was a representative for the Hamas-linked Council on American-Islamic Relations (CAIR) and, not long ago, stepped down as Executive Director of the South Florida Muslim Federation (SFMF), an umbrella group for the vast majority of radical Muslim organizations throughout South Florida.

Indeed, Mohammad’s life in Florida has been a balancing act between participation in left wing politics and engagement with Islamists, two entities that, in recent years, have become dangerously close with one another. His AMPC seems to be an effort to combine both. Proof of this can be seen in a recent attack Mohammad hurled at his fellow Democrats. In March 2019, he posted on Facebook photos of US Representatives Ted Deutch and Debbie Wasserman Schultz, asking, “Are they representing all Americans or just one community?????” The post was an obvious bigoted reference to Deutch and Wasserman Schultz’s Jewish backgrounds.

In December 2018, Mohammad was featured on a panel discussion held at the Pembroke Pines-based Darul Uloom Institute (DUI), on the topic of ‘Religion and Politics in America.’ DUI is infamous for having been a haven for al-Qaeda operatives, including ‘Dirty Bomber’ Jose Padilla and al-Qaeda commander Adnan el-Shukrijumah, and DUI’s imam, Shafayat Mohamed, has been thrown off various county boards for his fiery rhetoric against homosexuals. During the discussion, (Imtiaz) Mohammad slammed America and her citizens, saying “America [is] run on hate” and “American people are the most uneducated nation in the world.”

Taking into account all of the above, it is a wonder that so many Democrat leaders have happily been photographed with Mohammad, yet so many have done so.

Additionally, Mohammad appears to be very involved with former Mayor of Broward County Dale Holness, who is running for US Congress.

Why would all these notable and influential officials allow themselves to be photographed with such a toxic individual as Imtiaz Mohammad? Can they all claim ignorance or do they even care? In the case of Ilhan Omar, she has a record of making brutally controversial and derogatory statements about America and Jews, but these others do not have the same history. That said, their political party has worked hard to embrace radical Islam, so there is a good chance that some if not most of them embrace it as well, as evidenced by their uncritical acceptance and proxy legitimization of this documented Islamist.

It appears that identity politics and a wish to pander to Muslims, instead of principles and integrity, are the driving force behind many Democrat politicians’ obsequious courting of Mohammad. He and his anti-democratic ideology need to be condemned, not cozied up to.

Regardless, those in positions of power, if they do not wish to be a party to extremism and bigotry, should be more cautious about who they cavort with. Otherwise, they will wind up with someone like Imtiaz Mohammad’s picture next to theirs, implying a tacit endorsement of his/their hate-filled agenda.