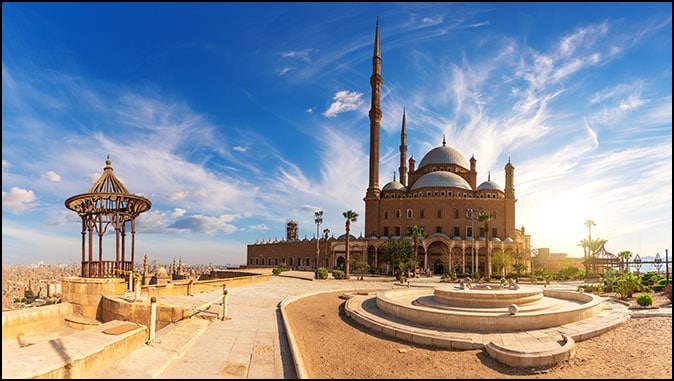 Churches in Egypt: Harassed Islands in a Sea of Mosques
Thousands of mosques go up, but woe to the Christian who dares open a church.
By Raymond Ibrahim

Raymond Ibrahim is a Shillman Fellow at the David Horowitz Freedom Center. This article originally appeared on Coptic Solidarity.

According to a May 19, 2021 Arabic-language report, Egypt’s Ministry of Endowments just announced that, since September 2020, 1,413 mosques—1,315 of which are brand new—were opened in the North Africa nation.

This announcement underscores the double standards that Christians and Muslims can expect in Egypt. For inasmuch as mosques proliferate all throughout the nation, building new or even renovating old churches is like pulling teeth for Copts.

According to one detailed study by author Adel Guindy, “there is one church per 5,800 Orthodox Copts”; this forces many Christians “to travel far distances outside of their towns for religious services (baptism, marriage, funerals, and regular mass).” On the other hand, based on the number of mosques in Egypt (114,000 in 2016, more now) and Egypt’s estimated Muslim population, there is about one mosque for every 700 Muslims. In other words, even after balancing out the ratio between Muslims to Christians, there are still about eight mosques for every one church. The discrepancy could not be clearer.

As Coptic Solidarity observed in a 2019 report, “The Egyptian government does not apply a single law equally for the building and repair of mosques, churches, and synagogues.” Indeed, in late 2016—around the time that St. Peter’s Cathedral in Cairo was bombed, killing 25 Coptic worshippers, and as several other churches were being closed by authorities—the Egyptian government again boasted about opening 10 new mosques every week and allotting several billion Egyptian pounds to opening thousands more. Similarly, Al Azhar “the main authority in theology and Islamic affairs,” is entirely subsidized by the government (13 billion Egyptian pounds, USD $726 million, in 2018).

Why such a double standard exists can be traced back to Article 2 of Egypt’s Constitution: “Islam is the religion of the State … The principles of Islamic Sharia are the main source of legislation.” As it happens, Islamic Sharia is decidedly hostile to non-Muslim places of worship; strictly interpreted, Sharia forbids the building or renovating of churches in Egypt. Although that law is not strictly enforced, its “spirit”—which breeds hostility for churches amongst Egypt’s rank and file—lives on.

Thus, on those occasions where Christian tenacity overcomes the red tape “jihad,” and a church permit is secured, there’s the Muslim mob to contend with. Once local Muslims get wind that a church might be recognized in their neighborhood, they form in large mobs — typically after Friday prayers, when the imam riles them — riot, attack, and sometimes kill Christians, and torch their homes and/or church in question. Then to diffuse the situation, local authorities, some of whom aid or cover for the mob, promptly revoke the church’s pending permit on the claim that it poses a “security concern” for the village.

“A great deal of Muslim young men, aged 16-26, from our village and nearby gathered in front of our church building, shouting ‘Allahu Akbar’ and chanting hostile slogans against Copts and the Church, such as ‘We don’t want a church in our Islamic village,’” recalled Moheb, a member of one of the Luxor churches closed. “They tried to break the front door … but we locked [it] from the inside. We immediately called the police who arrived and dispersed the demonstrators but they didn’t arrest anyone. They then closed the church building, sealed it and placed security guards with it.”

Responding to that closure, Gamil Ayed, a local Coptic lawyer, voiced typical Christian sentiment: “We haven’t heard that a mosque was closed down, or that prayer was stopped in it because it was unlicensed. Is that justice? Where is the equality? Where is the religious freedom? Where is the law? Where are the state institutions?”

Two months before those eight churches were closed, another nearby church was shut down under identical circumstances. “There are about 4,000 Christians in our village and we have no place to worship now,” responded a local resident, Rafaat Fawzy. “The nearest church is … 15km [or nine miles] away. It is difficult to go and pray in that church, especially for the old, the sick people and kids.”

He too continued by asking the same questions on the minds of millions of Christians in Egypt: “Where are our rights? There are seven mosques in our village and Muslims can pray in any place freely, but we are prevented from practicing our religious rites in a simple place that we have been dreaming of. Is that justice? We are oppressed in our country and there are no rights for us.”

A few days after the Luxor church closings, Muslims assaulted Christians in al-Minya because they “objected to the presence of a church in the area”; three Christians were hospitalized.

All of these attacks took place, it bears mentioning, two years after Egypt’s much touted “church law,” which passed in 2016 and was meant to ease restrictions on churches, but which, in fact, “discriminates against the Christian minority in Egypt,” to quote Human Rights Watch.

The many difficulties Egypt’s Christians encounter in the context of church worship is just one of several violations against their human rights. Whether their daughters are targeted for abduction and forced conversion and marriage, or whether they are arrested and imprisoned on the accusation that they mocked Islam, or whether they must be demonized and hated thanks to the teachings of often government-connected mosques and universities, Christians simply do not share in the same human rights that Muslims do in Egypt.