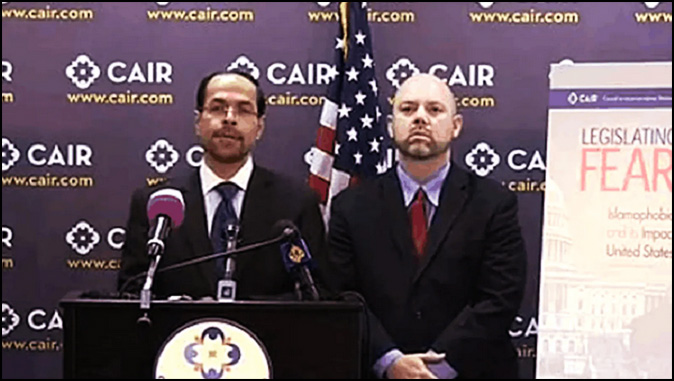 CAIR Takes Aim
Can you guess whom the terror-tied group is targeting now?
By Clare M. Lopez

In a June 14, 2022 op-ed in the Washington Post, Corey Saylor, the Director of Research and Advocacy at the Council on American-Islamic Relations (CAIR), issued a demand to the administration of newly-elected Virginia Governor Glenn Youngkin and Lieutenant Governor Winsome Earle-Sears. CAIR, which was named an unindicted co-conspirator in the 2008 Holy Land Foundation terror funding trial, wants the Youngkin administration to “reject [Brigitte] Gabriel and ACT for America.” A May 20, 2022 photo posted on @ACTBrigitte’s Twitter page showed Lieutenant Governor Sears posing with Gabriel. Displaying that photo, CAIR issued a May 27, 2022 press release calling Gabriel a “notorious racist and anti-Muslim bigot” and calling on Sears to “repudiate her alleged ties with a notorious anti-Muslim hate group leader.” CAIR’s more recent Washington Post article then made reference to that photo of Gabriel with Sears and claimed that ACT for America is an “anti-Islam extremist group” whose leadership should be ostracized and rejected.

It would seem a bit rich that an organization such as CAIR, which itself has been named specifically in the legal documents of a terror financing trial, should be providing advice on professional associations to anyone, much less the Government of the Commonwealth of Virginia. Ronald Weich, Assistant Attorney General of the United States Department of Justice, wrote a letter to then-U.S. Congresswoman Sue Myrick dated February 12, 2010, in which he responded to her about how CAIR came to be named an unindicted co-conspirator of the Holy Land Foundation for Relief and Development in the United States v. Holy Land Foundation et al. (CR. No. 3:04-240-P N.D.TX.) case. In that letter, Assistant Attorney General Weich provided official trial testimony and other evidence introduced in that trial “which demonstrated a relationship among CAIR, individual CAIR founders, and the Palestine Committee. Evidence was also introduced that demonstrated a relationship between the Palestine Committee and HAMAS, which was designated as a terrorist organization in 1995.”

To be clear, this was not mere guilt by association, a scenario that Saylor attempts to portray for Gabriel and ACT for America in his Washington Post piece, in which he cites alleged statements of various individuals who may have been present at an ACT event sometime in the past. Citing the Southern Poverty Law Center doesn’t help his case, either.

It may be noted that this would not be the first time that CAIR has attempted to insert itself into the associations, business, and presentations of others it accuses of “anti-Muslim bigotry.” In 2015, Brandeis University withdrew plans to bestow an honorary degree on Ayaan Hirsi Ali (a Somali-born apostate from Islam), just a day after protests from groups that included CAIR. In August 2019, the Norwich Bulletin attacked E. Miles Prentice, the owner of the Connecticut Tigers (farm team of the Detroit Tigers Major League Baseball team), citing criticism of the Center for Security Policy (CSP), a Washington, DC think tank by Ibrahim Hooper, CAIR’s communications director. At the time, Prentice served as CSP’s Board Chairman. Prentice reportedly wound up losing the team. The Pentagon itself has been intimidated by CAIR regarding anti-terror training reportedly termed “anti-Islamic.” And in 2020, a student at Scottsdale Community College was joined by CAIR’s Arizona chapter in filing suit against Professor Nicholas Damask over some quiz questions they alleged condemned Islam for justifying terrorism. Initially, the college chastised Professor Damask, but later apologized to him and cleared him of any wrongdoing. The lawsuit itself was thrown out of court, and the Scottsdale Community College agreed to pay a $155,000 settlement to Professor Damask.

This list could go on, but you get the idea. As for CAIR, though, asked to condemn Hamas by name, well, not so much.

At its official website, ACT for America – which is a non-profit grassroots movement – declares that its mission is “to educate, engage, train, and mobilize citizens to ensure the safety and security of Americans against all threats foreign and domestic while preserving civil liberties guaranteed by the US Constitution.” ACT for America works especially in the public policy arena to provide informative input for bills introduced at the state and federal levels, with an emphasis on preserving civil liberties protected by the U.S. Constitution.

For their part, during the 2020 campaign as well as in the months since taking office, both Governor Youngkin and Lieutenant Governor Sears have made a point of emphasizing their commitment to championing the civil rights and welfare of all Virginians, in policy areas including antisemitism, criminal justice, the economy and job creation, education, and health.

CAIR, on the other hand, apparently would rather forget all about the Holy Land Foundation trial and focus instead on disparaging a 20-year friendship with mean-spirited barbs about the Virginia Governor, Lieutenant Governor, and an American citizen of immigrant background who leads one of the largest and most patriotic-minded organizations in the country. Expect Governor Youngkin, Lieutenant Governor Sears, and most Virginians to see straight through that.

Clare M. Lopez is the Founder/President of Lopez Liberty LLC.