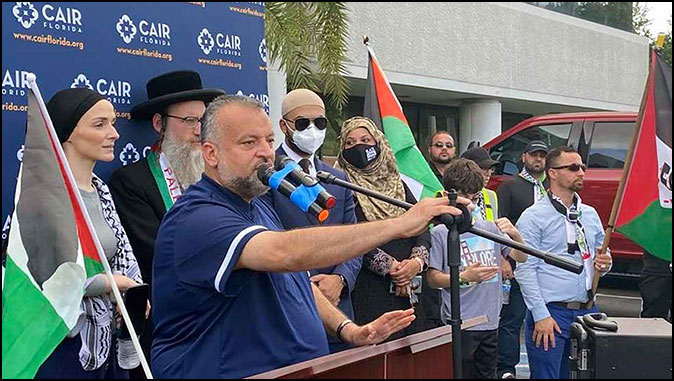 The mainstream media likes to paint CAIR as a mainstream Muslim group interested in protecting the civil rights of the Muslim community. The reality, though, is that CAIR is a support network for terror with both foundational and financial links to Hamas. This past month, CAIR’s true nature showed itself, as the group partnered with a convicted member of Palestinian Islamic Jihad (PIJ), Hatem Fariz, to run a series of Tampa, Florida rallies meant to curse Israel and excuse Hamas violence. The events were proof of why the media must end its cozy relationship with CAIR. To continue to promote this group only legitimizes hate and terror.

The Council on American-Islamic Relations (CAIR) was established in June 1994 as a part of the US chapter of the global Muslim Brotherhood’s Palestine Committee, which at the time was headed by then-Chairman of the Hamas Political Bureau Mousa Abu Marzook. Officials from CAIR have been convicted of terror-related crimes, and the US government named CAIR a co-conspirator to the financing of Hamas. The Florida chapter of CAIR has not strayed much from its national parent. In July 2014, CAIR-Florida co-sponsored a pro-Hamas rally in Downtown Miami, where rally goers repeatedly shouted, “We are Hamas” and “Let’s go Hamas.”

The Islamic Community of Tampa (ICT), a.k.a. Masjid al-Qassam, was founded by Sami al-Arian, a convicted terrorist who set up a Southwest Florida PIJ terror network, over three decades ago. ICT was a big part of the network. At a 2017 CAIR media brunch, then-CAIR-Florida Executive Director Hassan Shibly said that the group depends on ICT for “programs, fundraising” and more. He said, “Really, we couldn’t do the work without the tremendous support we get from the mosque.”

Attending the CAIR brunch was Hatem Fariz, a former al-Arian cohort and the Director of ICT. Fariz, like al-Arian, was convicted for the role he played as a member of PIJ. According to the indictment against him, al-Arian and six others, Fariz “was a PIJ member” and did “conspire… to commit offenses against the United States… by making and receiving contributions of funds, goods, and services to or for the benefit of the Palestinian Islamic Jihad.” Fariz pled guilty and was sentenced, in July 2006, and spent nearly four years in prison.

Throughout the middle of May, as Hamas and PIJ rained thousands of rockets down on Israeli civilian neighborhoods, CAIR collaborated with Fariz to organize a number of anti-Israel rallies. One, ‘SAVE SHEIKH JARRAH PROTEST,’ took place on May 15th. The title of the event alludes to Arab residents of East Jerusalem, who face eviction for refusing to pay rent, while living illegally in property purchased and owned by Jews prior to 1948. The event page for the protest states that the protest was created and hosted by Fariz and CAIR-Florida representatives Aida Mackic and Lara Ghannam.

According to Canary Mission, a website that documents hatred against the US, Israel and Jews, in November 2011, Ghannam tweeted a number of venomous anti-Jewish statements, including “I swear to God I hate yahood” and “I’m so tired and hungry. This day is moving slower than a jew writing a large check.”

Another CAIR/Fariz rally was held May 21st, outside the office of US Representative Kathy Castor, who upset the rally organizers by condemning Hamas and tweeting that Israel “has a right to defend itself.” Speaking at the rally was Khalid Ouanaim, the Tampa Director of ICNA Relief. ICNA Relief is a subsidiary of the Islamic Circle of North America (ICNA), a group with significant links to South Asian terror. Ouanaim, like CAIR, has a relationship with Fariz, who is seen throughout the rally videotaping, helping to set up sound equipment, and announcing the next day’s rally.

The May 22nd rally, like the Kathy Castor office rally, took place after the ceasefire agreed upon by Israel and Hamas. Much of the world wanted to see a ceasefire to end the death and destruction that was taking place on both sides. Yet, that did not stop new CAIR-Florida Executive Director Abdullah Jaber from emphatically and repeatedly chanting (along with the crowd), “We don’t want a ceasefire.” Speaker Noor Salhem, a community activist, lamented about the fact that many, as was mentioned re Representative Castor, say Israel has a right to self-defense, while calling Hamas “terrorists.” He said, “This is not acceptable. This is not fair.”

One further individual who spoke at these rallies was David Feldman, a rabbi from Neturei Karta, a fringe sect of Jews who take photographs with Hamas leaders and attend Holocaust denial conferences. Anti-Israel organizers like to have representatives from Neturei Karta participate at their functions, as a way to push the false and absurd narrative that the group speaks for the Jewish community. Feldman came to the rallies with a poster containing an image of the flag of Israel with a red circle and line through it, signifying Neturei Karta’s sinister mission, which is the destruction of Israel.

Organizing rallies with a convicted terrorist and a rabid anti-Semite; believing Israel, a sovereign nation, has no right to defend herself, and Hamas, a globally-recognized terrorist group, does; barking that you do not want a ceasefire, when you know it will only cause more bloodshed and damage for even the side you claim to support; and proudly exhibiting your goal of Israel’s destruction – these are the images and ideals we are left with from just a few loud and hateful Tampa, Florida rallies. But this is the reality of CAIR.

While much of the media will describe these events using the generic term “pro-Palestinian,” the truth is much different and chilling. Indeed, the only way to honestly depict these events is to discuss the violence and bigotry that is associated with both the events and the group organizing them.