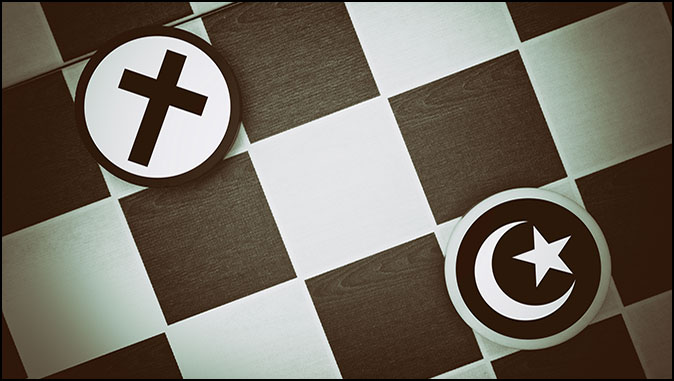 CAIR: Love for Jesus Unites Christians and Muslims at Christmas Time
But only one of these fundamentally different beliefs about Jesus can be true.
By Dr. Stephen M. Kirby

On December 15, 2021, the Council on American-Islamic Relations (CAIR) re-released an op-ed titled “Love for Jesus Can Bring Christians and Muslims Together.” This op-ed was written by Ibrahim Hooper, CAIR’s current National Communications Director, and for a number of years it has been released annually before Christmas.

“As forces of hate in this country and worldwide try to pull Muslims and Christians apart, we are in desperate need of a unifying force that can bridge the widening gap of interfaith misunderstanding and mistrust. That force could be the message of love, peace and forgiveness taught by Jesus and accepted by followers of both faiths.”

Spiritual Unity in the Koran?

After writing the above statement about a desperately needed “unifying force,” Hooper mentioned Koran 2:136:

Christians and Muslims would do well to consider another verse in the Quran reaffirming God’s eternal message of spiritual unity: “Say ye: ‘We believe in God and the revelation given to us and to Abraham, Ismail, Isaac, Jacob, and the Tribes, and that given to Moses and Jesus, and that given to (all) Prophets from their Lord. We make no distinction between any of them, and it is unto Him that we surrender ourselves.’” (2:136)

But Koran 2:136 does not reaffirm “God’s eternal message of spiritual unity” between Christians and Muslims. In the first place, the “ye” to whom this verse is directed are the Muslims; in the second place, even though Hooper used the word “God” in this Koran verse, this verse actually refers to Allah, the god of Islam, and Allah’s revelation (the Koran), and in both of which Muslims must believe.

It is also important to note that Koran 2:136 states that Jesus is just another prophet and not, as Christians believe, the Son of God.

Where is the “spiritual unity” in this Koran verse that requires Christians to believe in Allah, the god of Islam, and the Koran, and to deny that Jesus is the Son of God?

Hooper’s claim of “spiritual unity” between Christians and Muslims is further undermined by the fact that Christianity is considered to be a false religion because Allah states that Jesus was not crucified, but it only appeared so (Koran 4:157-158). Instead, Allah took Jesus, who was inside a house with his disciples, bodily into paradise and made one of Jesus’ disciples look like Jesus; it was that disciple who was crucified. So Muslims who know their religion look at a crucifix or a painting of the Crucifixion and see an imposter hanging on the cross. And of course, if there was no Crucifixion, there was no Resurrection. So Islam teaches that Christianity is a false religion based on a fraud, and the disciples who spread that religion knew about that fraud.

The “unifying force” of Jesus’ Message

As I pointed out above, Hooper wrote:

“…we are in desperate need of a unifying force that can bridge the widening gap of interfaith misunderstanding and mistrust. That force could be the message of love, peace and forgiveness taught by Jesus and accepted by followers of both faiths.”

Hooper quoted the following partial statement from Muhammad which seemed to imply that Jesus was the unifying figure for Christians and Muslims:

Prophet Muhammad said: “Both in this world and in the Hereafter, I am the nearest of all people to Jesus, the son of Mary. The prophets are paternal brothers; their mothers are different, but their religion is one.”

But here is Muhammad’s actual statement, and in which he explained what Jesus’ message would really be when Jesus returned to earth:

“Imam Ahmad recorded that Abu Hurayrah said that the Prophet said, The Prophets are paternal brothers: their mothers are different, but their religion is one. I, more than any of mankind, have more right to ‘Isa [Jesus], son of Maryam, for there was no Prophet between him and I. He will descend… He will break the cross [destroy Christianity], kill the pig, and banish the Jizyah and will call the people to Islam. During his time, Allah will destroy all religions except Islam…’Isa will remain for forty years and then will die, and Muslims will offer the funeral prayer for him.”

So according to Muhammad, Jesus would return to earth, destroy Christianity, and call people to Islam, while Allah would be destroying all the other religions. Jesus, being only a man, would then die after forty years.

And according to Muhammad, during those forty years Jesus would be judging mankind by the laws of the Koran:

“Narrated Abu Hurairah: Allah’s Messenger said, “How will you be when the son of Maryam (Mary) [‘Isa (Jesus)] descends amongst you, and he will judge people by the law of the Qur’an and not by the law of the Gospel.””

It appears that the Muslim Jesus will not have much “love, peace and forgiveness” for Christians.

In his op-ed, Hooper acknowledged, without going into detail, that Christians and Muslims “do have some differing perspectives on Jesus’ life and teachings.” But Hooper believed that the mutual love of Jesus by Christians and Muslims, and Jesus’ “message of love, peace and forgiveness,” would overcome those seemingly minimal differences and provide a “unifying force” for those two religions.

In spite of what Hooper claims, there is no unifying force that can bridge these fundamentally different beliefs about Jesus, because only one can be true.

Dr. Stephen M. Kirby is the author of six books about Islam. His latest book is Islamic Doctrine versus the U.S. Constitution: The Dilemma for Muslim Public Officials.

When Dracula Terrorized Muslim Terrorists Before he became a fictitious vampire, he was a scourge…

When the Cid Shattered the Teeth of Jihad

From ‘We are Hamas’ to ‘Death to Israel’ – Same Old CAIR

The Black Lives That Don’t Matter