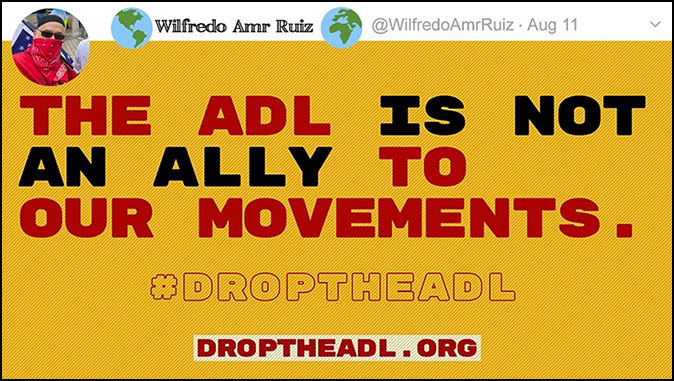 Last month, a letter was published, signed by a large number of organizations, calling on Progressives to “drop” their partnerships with the Anti-Defamation League (ADL), claiming that the ADL “undermines the rights of marginalized communities.” What is at the heart of this letter is the perception that the ADL is a defense mechanism for the state of Israel – Israel being an issue that the Progressive movement, in recent times, has taken a strong stance in opposition to. For some of the signatories, their reason for participating may be a little more personal, as the ADL has called them out by name, exposing the groups’ extremism. One of them is CAIR.

CAIR or the Council on American-Islamic Relations was founded in June 1994, under the leadership of then-global head of Hamas, Mousa Abu Marzook. CAIR claims to be a civil rights organization that protects Muslims from discrimination, but the truth is that CAIR was created to assist Hamas, and CAIR’s present iteration is not far from that reality.

One can read essentially the same about this dichotomy on the ADL’s website, where the ADL devotes a fairly large section to CAIR and its many terrorist associations. It states, “In recent years, much of its activity has centered on responding to the proliferation of anti-Muslim incidents and sentiment expressed nationwide. However, at times the organization’s positions and work have been shadowed by early connections between some of CAIR’s top leadership and organizations that are or were affiliated with Hamas.”

CAIR might have endorsed the anti-ADL letter anyway, but no doubt, the ADL releasing in-depth information about CAIR’s terror ties made signing the letter a priority for the Hamas-related group. And if it was a priority for CAIR, it was double the priority for CAIR’s Florida media representative and propagandist, Wilfredo Amr Ruiz.

Ruiz, who is the Communications Director for CAIR-Florida, spent this past July and August repeatedly denouncing the ADL on social media. In an August 11th post about the letter, Ruiz tweeted, “ADL is one of the Islamophobic orgs targeting Ethnic Studies, Palestine & Arab American Studies.” Why did Ruiz feel the need to obsess over and take action against the ADL? Did he or his cronies have adverse dealings with the group?

Prior to going to work for CAIR, Ruiz, for years, had been involved with the American Muslim Association of North America (AMANA), a radical Muslim outfit based in Miami that has used its website to target Jews, Christians and homosexuals with hate. Ruiz founded AMANA’s Puerto Rico and Connecticut chapters, and according to his bio, he is “currently acting as its legal adviser.” In July 2010, while Ruiz was prominent in the organization, AMANA was condemned by the ADL for promoting what the ADL referred to as a “venomous” anti-Semitic video. The video was produced by and featured white supremacist icon David Duke.

For Ruiz to be associated with anti-Semitism was not out of the ordinary. In April 2010, just three months prior to the ADL’s condemnation of AMANA, Ruiz wrote an article vilifying the Jewish religion. In it, Ruiz cites Justinas Pranaitis, a Lithuanian Catholic priest who was infamous for advancing the blood libel claim against Jews and who was stripped of his priesthood. Ruiz provides a link to the website talmudunmasked.com, which contains Pranaitis’ anti-Semitic conspiracies and is produced by those alleging Jews perpetrated the 9/11 attacks.

Ruiz and CAIR are very close with the Islamic Community of Tampa (ICT), a.k.a. al-Qassam, a mosque founded by persons linked to Palestinian Islamic Jihad (PIJ). CAIR-Florida Executive Director Hassan Shibly, speaking about ICT, stated, “Really, we couldn’t do the work without the tremendous support we get from the mosque. They allow us to do programs, fundraising, you name it, they’re always there for us.” At CAIR-Florida’s 2019 Tampa annual banquet, Ruiz was photographed smiling with his arm around convicted PIJ member and ICT Managing Director Hatem Fariz. In May 2019, Shibly met with Fariz at CAIR’s Tampa headquarters.

Last month, CAIR-Florida held an event featuring Sami al-Arian, the former ringleader of the PIJ network in the Tampa area. Like Fariz, al-Arian was convicted of PIJ support. He was jailed and, later, deported to Turkey. Regarding CAIR, itself, al-Arian co-founded CAIR’s parent organization, the Islamic Association for Palestine (IAP), in 1981.

The ADL is widely known as a liberal Jewish organization that tends to align itself with left-leaning groups and individuals. And the organization is far from being anti-Muslim. In fact, in November 2016, ADL CEO Jonathan Greenblatt reacted to the idea of a Muslim registry in the US by declaring that, if it went into effect, “this proud Jew would register as a Muslim.”

None of this means much to groups like CAIR or their spokesmen like Wilfredo Ruiz. When CAIR signed onto the “Drop the ADL” letter to Progressives – along with a number of Progressive groups – CAIR did so not because it has any genuine feelings for the political Left, but because it has been adversely affected by the ADL, and because, for better or worse, when the ADL says something, people take notice.

And yes, the ADL’s perceived one-sided and seemingly unconditional support for Israel surely played a role, as well. With CAIR’s deep ties to Hamas and PIJ, who could believe that CAIR is anything other than violently opposed to the Jewish State? As Hassan Shibly tweeted vehemently, in August 2014, “Israel and its supporters are enemies of God.”

The ADL was right to have called out CAIR and Ruiz’ AMANA. While some on the extreme Left and their allies are telling Progressives to drop the ADL, more appropriately they should be calling on everyone to, instead, drop CAIR and all of its representatives.