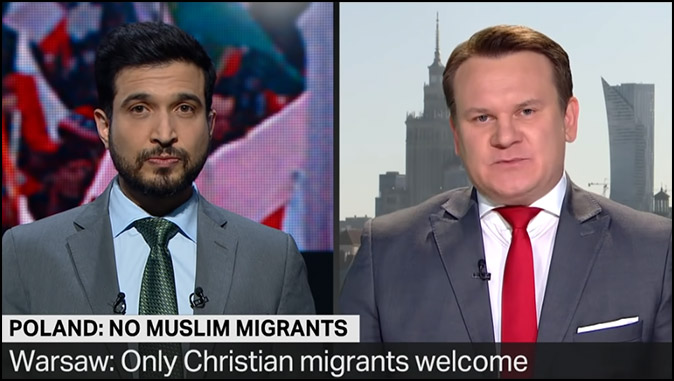 Although somewhat dated, a televised debate from 2019 is instructive of all the “games” certain Muslims play to exonerate their religion while projecting Islam’s shortcomings onto the other, in this case, Christian Europeans.

Broadcast by Turkish Radio and Television Corporation, the debate was supposed to be an interview, but the show’s Muslim host, Imran Garda, immediately launched into a diatribe against Dominik Tarczynski, a member of Poland’s parliament, for that nation’s refusal to take in Muslim migrants.

To his credit, Tarczynski stood his ground, including when Garda introduced the “relativism” card via the 2019 New Zealand mosque massacre of 51 Muslims: he implied that the shooter, Brenton Tarrant, was motivated by Christianity no less than Muslim terrorists are motivated by Islam, so why mention religion? To this, Tarczynski replied with the obvious:

Okay, but how many terror attacks were committed by Christians in the name of the religion? How many of them shout “Christ is the Lord”? None, zero. And every single [terrorist attack] committed by Muslims is followed by “Allahu Akbar.” That’s just a fact!

That said, and because Tarczynski is still, after all, a Westerner — meaning he instinctively fears the dreaded label of “Islamophobe” — his defense was somewhat incoherent. For example, while insisting that Poland will not take in any Muslim migrants, he repeatedly insisted that “We [Poles] have no problems with Muslims” and “This is not about religion.”

After all, and as documented here, there have been countless attacks on Christian churches by “Allahu Akbar” screaming Muslims that have claimed, not 51 lives, as was the case with the New Zealand mosque attack, but over a thousand lives of Christians who were otherwise peacefully worshipping in their churches. And yet, the “international imagination” — which is another way of saying the “mainstream media,” as well as international organizations like the UN — have completely ignored this inconvenient fact, while continuously harping on and presenting the mosque attack as the “biggest terrorist attack” on a house of worship.

At one point, Garda asked Tarczynski a straightforward question: “Has Poland had a history of problems with Muslims? Yes or no?” The Muslim inquisitor was fishing for a positive response so he could warp it into meaning that, from of old, Poland has been “Islamophobic.”

Sensing this, the defensive Pole emphatically responded: “No; no. Not at all; not at all.”

However, when Garda kept pestering Tarczynski about history — claiming that “historically, Poland has had far more problems from Christians than Muslims, haven’t they?” — the hitherto cautious but frustrated Pole snapped: “As you know, our king Sobieski stopped Muslims in Vienna…If not for king Sobieski, Muslims would have taken over Europe.”

This is a reference to the Muslim siege of Vienna in 1683, which, indeed, featured some 200,000 jihadists, who sought to conquer all of Europe by breaking through Vienna.

Not one to be outdone by inconvenient facts, Garda argued, “Since you bring up Vienna, Poland was partitioned three times. Was it done by Muslims?”

This, of course, is a classic red herring: even if Poland and secular European states warred in the eighteenth century, what does that have to do with the fact that Muslims had repeatedly tried — and are apparently still trying — to conquer Poland and all of Europe, one way or the other?

Though dated, the debate is well worth watching, as it features an especially adroit apologist for Islam, and a relatively staunch defender of European civilization. The main difference is that, whereas the Muslim unrestrainedly misrepresents and twists the facts, the European holds back, lest the Islamophobic charge stick.

If the gloves had come off for both contestants, it is clear who would have won the debate, since the unvarnished truth always prevails over falsehoods and even sophistry — if and when it is allowed to be uttered.