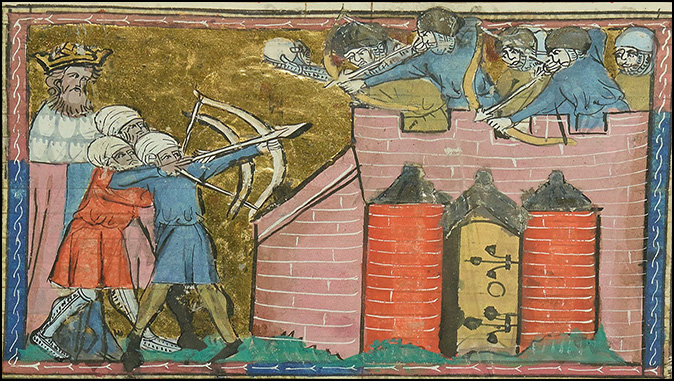 A ‘Miraculous’ Christian Victory over Jihad
This week in history: the Battle of Antioch.
By Raymond Ibrahim

This week in history witnessed a Crusader victory over the forces of Islam that, for those present, could only be interpreted as a miracle.

As discussed here, on June 3, 1098, the Crusaders managed to liberate the ancient Christian city of Antioch — where the very word “Christian” was first coined (Acts 11:26) — from Islamic abuse.

Before they could celebrate, however, or even recuperate, Kerbogha, the Turkish lord (or atabeg) of Mosul, arrived with a “countless and innumerable throng” of forty thousand fighters, consisting of Turks, Arabs, Egyptians, Africans, and Persians. “It is quite obvious that these people are completely mad,” the atabeg observed of the hopelessly outnumbered Crusaders: “They are a presumptuous race. Doubtless they have every confidence in their courage. But by Muhammad, it was a bad day for them when they entered Syrian territory.”

He quickly blockaded Antioch; and they who only yesterday were the besiegers became the besieged. Worse, by the time the Crusaders took Antioch, most of its stores had been depleted by the Turks during their lengthy besiegement, forcing the feral Franks to eat leather shoes and drink horse blood.

Now desperate, the Crusaders “met for deliberation, and it was decided by common consent to send a deputation” to Kerbogha, “proposing that he agree to do one of two things: either let him depart and leave the city to the Christians as a possession forever — the city which had been theirs in the first place and which now by the will of God had been restored to them — or let him prepare for battle and submit to the decision of the sword.”

This — Just War logic — was at the heart of the message delivered to the Turkish leader by the Christian delegation:

Kerbogha, the Frankish lords send the following message to you. What staggering audacity has possessed you that you should have marched against them with armed forces when in their view you and your king and your people [in a word, Muslims] are guilty of invading Christian lands with unbridled covetousness and insulting and killing them all. If you had any kind of rule of law and wanted to act fairly towards us, we would negotiate, reserving the rights of honor, and demonstrate to you with incontrovertible arguments what ought to belong to the Christians.

Further underscoring the religious nature of the quarrel, the delegation continued by telling Kerbogha that if he were to embrace Christianity, they would surrender Antioch to him and take him for their lord. But if he still refused, then “fly immediately or prepare your necks for our swords.”

As might be expected, Kerbogha “was so transported with anger that he could barely speak,” and finally responded by saying that “we took” Christian lands “by means of our remarkable strength, from a nation [Byzantines] scarcely better than women.” He continued:

Moreover, we think that you are mad to come from the ends of the earth, threatening with all your might to drive us from our homes, when you have insufficient supplies, too few arms, and too few men. Not only do we refuse to accept the name of Christians, but we spit upon it in disgust. To respond briefly to the message you have brought: return, you who form this delegation, to your leaders swiftly and tell them that if they are willing to become [Muslims] like us and renounce the Christ upon whom you seem to rely, we shall give them not only this land, but land of greater wealth and size.

Should the Crusaders refuse this offer, however, “they will undoubtedly die horribly,” continued the atabeg, “or endure the exile of eternal imprisonment, as slaves to us and our descendants [and] I shall save all those who are in the flower of youth of either sex, for the service of my master.”

The Christian delegation returned to Antioch. After hearing Kerbogha’s retort, the famished, exhausted, and vastly outnumbered men concluded that there was nothing left but to sally forth and meet the hordes besieging them head on.

A three day fast was ordered; the little food available was given to the horses. Then everyone in Antioch, lord and commoner, “marched through the city squares, stopping at churches and calling on God’s aid, barefoot and crying, beating their breasts, so grief stricken that father would not greet son, brother would not look at brother,” to quote Raymond of Aguilers, who was present.

Finally, on the morning of June 28, 1098, “everyone received the Eucharist and offered themselves to die for…God, if he should wish.” Then some twenty thousand Crusaders — the entire army minus two hundred left to defend the city — issued out of the Gates of Antioch to the sound of blaring horns.

Never expecting the vastly outnumbered and weakened Franks to sally forth and meet their much larger and well rested army, the Muslims were shocked — doubly so, as the desperate Christians fought with a feral fury. Contemporary accounts speak of half-starved “knights bristling like porcupines with arrows, darts, and javelins, but still moving forward and fighting ferociously.”

The Crusaders’ tight formations eventually caused the Muslim horsemen — used as they were to overwhelming their enemies with arrows — to panic and retreat. “To pursue them more effectively,” the relentless Christians “mounted the horses of those [Muslims] who were dying and left their horses — gaunt and suffering from hunger — on the battlefield.”

The Franks’ berserker-like determination eventually won the day; the battle of Antioch became one of the First Crusade’s most astounding victories against the forces of Islam. All medieval chroniclers portrayed it as a miracle, citing angelic hosts, whom many Crusaders insisted on seeing, fighting alongside the knights. However one wishes to interpret such claims, the fact remains: “Modern military historians have attempted to come up with a more rational explanation for the Franks’ success, but the task is difficult,” observes Crusades historian Jay Rubenstein. “How did a force as spent and starved as the crusaders manage to overcome a superior, well-fed, and well-rested adversary?”

Even Islamic chroniclers marveled: “The Muslims were completely routed without striking a single blow or firing a single arrow,” disgustedly wrote Ibn al-Athir. “The only Muslims to stand firm were a detachment of warriors from the Holy Land, who fought to acquire merit in Allah’s eyes and to seek martyrdom. The Franks killed them by the thousand and stripped their camp of food and possessions, equipment, horses and arms, with which they re-equipped themselves.”

In this manner, the Battle of Antioch came to take pride of place in Crusading lore.

This article was excerpted from Raymond Ibrahim’s new book, Defenders of the West: The Christian Heroes Who Stood Against Islam (all quoted material is sourced there).