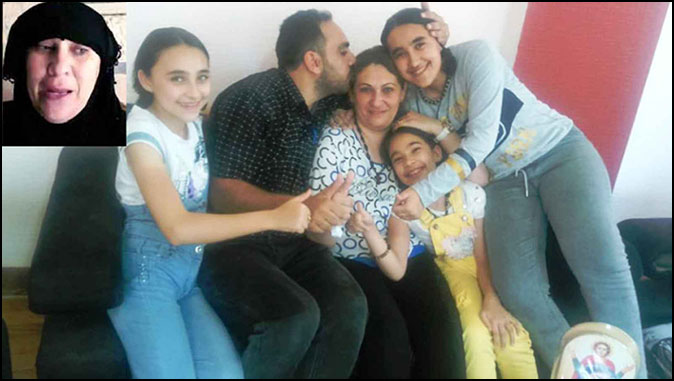 A Dubious Conversion to Islam: Missing Coptic Woman Reappears and Remains “Servant of Christ”
A scandalous story of religious coercion in Egypt comes to an end.
By Raymond Ibrahim

Raymond Ibrahim, author of Sword and Scimitar, is a Shillman Fellow at the David Horowitz Freedom Center. This article first appeared in Coptic Solidarity.

A Coptic Christian wife and mother who disappeared for nearly three months—supposedly because she had willingly converted to Islam and no longer wanted any connection to her “infidel” husband and three young daughters—has finally been returned to her family.

Ranya ‘Abd al-Masih, 39, a high school teacher of English in al-Minofiya, just north of Cairo, disappeared on April 22, 2020. A few days after her family contacted state security, she appeared in a one minute video dressed in a black niqab (female Islamic attire). In the video, and in between tears, Ranya insisted that she had finally and formally converted to Islam, which—“praise be to Allah”—she had been secretly following and concealing from her family for nine years. Accordingly, she no longer wanted anyone—her husband, children, family—to bother about her anymore.

From the start, her family refused to believe the video, insisting that it was obviously made under duress and noting that it was obvious that others were surrounding and giving her cues. “We’ve no problem for her to go [to Islam] of her own free will—based on conviction—but not as a person who is threatened and coerced into doing so,” her brother, Remon, had said in an interview. “She was definitely kidnapped and forced to make that video, due to threats against her or her husband and children if she refused to comply.”

He added that the idea that she had “secretly” embraced Islam was ludicrous, citing the fact that up until her disappearance she had been regularly attending church, visiting and praying in monasteries—even fasting 55 days in the lead up to Easter:

We are sure that Ranya, our beloved sister, whom we know so well, is not the one we saw on the video; that is a woman who is being threatened and coerced…If you can hear me, Ranya, know that we will never abandon you until we see you. Because you are a victim of a terror.

For nearly three months, Ranya’s family and the Coptic Church pleaded with the authorities—even sending a plea to President Sisi—until she was finally returned, on July 15, 2020.

A Coptic Church spokesman said that Ranya and her reunited family are currently staying in an undisclosed location, “until calm returns” to the region. Due to the delicate nature of the situation, the spokesman gave no other details concerning her disappearance and reemergence, other than to say that “Ranya remains a Christian who never once converted to Islam.”

Similarly, when asked during a televised interview if she had converted, her lawyer simply said, “she returned as Ranya ‘Abd al-Masih”—a play on her last name, which means “servant of Christ.”

The Victims of Anti-Christian Persecution

The Victims of Anti-Christian Persecution And a harrowing glimpse at their victimizers. By Jack Kerwick…

Traditional Muslims are Dishonest, Dangerous, and Deadly Whether in Iran, Iraq, or America!

Traditional Muslims are Dishonest, Dangerous, and Deadly Whether in Iran, Iraq, or America! By Don…

Christians Suffered an Increase in Persecution Last Year by Islam

The Short Turkish Woman Who Threatens Erdogan and Islam