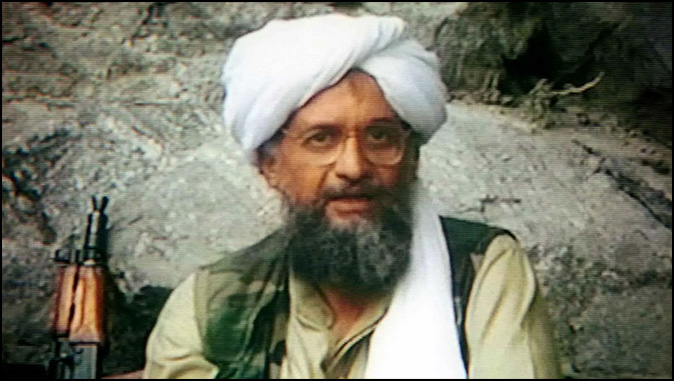 A Dead Terrorist vs. the Eternal Jihad
A look at 17 years’ worth of killing terrorists – and where it’s gotten us.
By Raymond Ibrahim

Ayman al-Zawahiri, the chief ideologue and for a decade leader of al-Qaeda, was finally killed, 21 years after the terror strikes of September 11, 2001. This is certainly welcome news, if only because someone like al-Zawahiri deserved his fate.

But while we can all celebrate, his death will, unfortunately, and despite Joe Biden’s August 1 speech, have zero impact on the global jihad. This dismal prognostication is fortified by the fact that, for nearly 17 years now, every time an Islamic terror leader has been killed, politicians and media exulted, portraying the death as a “major blow” to the jihad; and, for nearly 17 years now, I have responded by recycling an article that I first wrote in 2006, titled “The West’s Multi-Headed Monster.”

Although I changed the names of the jihadi leaders killed to suit the occasion — first Abu Mus‘ab al-Zarqawi, then Abu Hamza al-Masri, then Abu Laith al-Libi, then Abu Omar al-Baghdadi and Abu Ayub al-Misri, then Osama bin Laden, then Abu Bakr al-Baghdadi, and now Ayman al-Zawahiri — my conclusion always remained the same:

The West’s plight vis-à-vis radical Islam is therefore akin to Hercules’ epic encounter with the multi-headed Hydra-monster. Every time the mythical strongman lopped off one of the monster’s heads, two new ones grew in its place. To slay the beast once and for all, Hercules learned to cauterize the stumps with fire, thereby preventing any more heads from sprouting out. Similarly, while the West continues to lop off monster heads like figurehead Zarqawi [or Zawahiri, bin Laden, al-Baghdadi, et al] it is imperative to treat the malady — radical Islam — in order to ultimately prevail. Victory can only come when the violent ideologies of Islam are cauterized with fire. But alas, the Hydra-monster is myth, while radical Islam is stark reality.

Consider, for instance, all the exultation that took place in 2006 after al-Zarqawi — the forefather of the Islamic State, or “Al-Qaeda Second Generation” — was killed. Then, almost every major politician, including President Bush, Prime Minister Blair, and Iraq’s Prime Minister Maliki, gave some sort of victory speech. The New York Times called his death a “major watershed in the war.”

Similarly, in 2008, after Abu Laith al-Libi was killed, Congressman Peter Hoekstra issued a statement saying that his death “clearly will have an impact on the radical jihadist movement.”

More myopic triumphalism was in the air after Abu Omar al-Baghdadi and Abu Ayub al-Masri were killed in 2010 during a joint U.S.-Iraqi operation. Then, none other than Joe Biden, serving as vice president, said the “deaths are potentially devastating blows to al-Qaeda in Iraq [the embryonic form of the Islamic State],” adding “This operation is evidence in my view, that the future of Iraq will not be shaped by those who would seek to destroy that country” — a prediction that proved to be woefully wrong.

Similarly, U.S. commander Gen. Raymond Odierno asserted that “The death of these terrorists is potentially the most significant blow to al-Qaeda in Iraq since the beginning of the insurgency,” adding that it would be “very difficult” for the al Qaeda network to replace the two men.

And who could forget all the media triumphalism, if not hysteria, surrounding the 2011 death of Osama bin Laden? Then, CNN security analyst Peter Bergen declared that “Killing bin Laden is the end of the war on terror. We can just sort of announce that right now.” Insisting that the “iconic nature of bin Laden’s persona” cannot be replaced, Bergen further suggested that “It’s time to move on.”

Another CNN analyst, Fareed Zakaria, assured us that “this is a huge, devastating blow to al-Qaeda, which had already been crippled by the Arab Spring. It is not an exaggeration to say that this is the end of al-Qaeda in any meaningful sense of the word.”

In retrospect, surely all these assertions and assurances have proven to be immensely puerile—even for “mainstream media analysts.” The only significant development following the killing of bin Laden was the birth, spread, and subsequent hegemony of the Islamic State in Iraq and Syria (“ISIS”) — an organization that made al-Qaeda pale in comparison when it came to savagery and atrocities.

To recap, for years, Americans were repeatedly told that al-Qaeda was suffering “devastating blows”; that the killing of individual jihadis were “major watersheds in the war”; that “the end of the war on terror” occurred in 2011, when bin Laden died (“it’s time to move on,” counseled Peter Bergen); and “that the future of Iraq will not be shaped by those who would seek to destroy that country,” according to Biden.

Yet, lo and behold: an Islamic State, a caliphate engaged in the worst atrocities of the twenty-first century, was born — despite the deaths of individual jihadi leaders, including the notorious bin Laden.

In light of this, should one expect the jihad to disappear now that al-Zawahiri is dead? Joe Biden seems to still harbor such hopes. During his recent victory speech, and after opening with a typical contradiction — “You know, al-Zawahiri was bin Laden’s leader. He was with him all the — the whole time. He was his number-two man — the U.S. president said: “He [Zawahiri] will never again — never again allow Afghanistan to become a terrorist safe haven because he is gone.” Newsflash: with or without al-Zawahiri, Afghanistan has been and continues to be a “terrorist safe haven.”

When it comes to the significance of the killing of this or that jihadi leader, the most accurate prediction I have ever read — one that has proven too true — comes not from U.S. politicians, “experts,” or media. It comes, rather ironically, from Ayman al-Zawahiri himself. Asked in a 2005 interview about the status of bin Laden and the Taliban’s Mullah Omar, he confidently replied:

Jihad in the path of Allah is greater than any individual or organization. It is a struggle between Truth and Falsehood, until Allah Almighty inherits the earth and those who live in it. Mullah Muhammad Omar and Sheikh Osama bin Laden — may Allah protect them from all evil — are merely two soldiers of Islam in the journey of jihad, while the struggle between Truth [Islam] and Falsehood [non-Islam] transcends time (The Al Qaeda Reader, p.182, emphasis added).

And there it sadly is: jihad “transcends time” and is not predicated on this or that leader. Muslim warlords, ideologues, emirs, sultans, caliphs — even the prophet of Islam himself — have come and gone for nearly 1,400 years, but the jihad continues.

From here we return to my aforementioned Hercules/Hydra analogy of 2006: While the West continues to lop off “monster heads,” most recently al-Zawahiri, it must also comprehend that to achieve true and lasting victory over Islamic terrorism, nothing less than cauterizing those Muslim doctrines/ideologies that give birth to jihadis will ever do.

Death for Apostates, Jail for Blasphemers

Death for Apostates, Jail for Blasphemers Recent developments in Libya and Egypt. By Raymond Ibrahim…