The Mystery of the Kingdoms

Staff member
The Mystery of the Kingdoms
By Pete Garcia

Over the years, I have noticed that I can become rather obsessive when it comes to the study of the tiny, nuanced details and subtle shifts in variations as told by the writers of Scripture. Are they just creative licenses given to the particular writers to reach a particular intended audience? Or are they purposeful, divinely-inspired distinguishers meant to prophetically highlight some difference? Or both? For example, the subtle differences as found in the Gospels when it comes to the ‘mystery kingdom’ parables as told in Matthew 13, Mark 4, and Luke 8.

– But others fell on good ground and yielded a crop: some a hundredfold, some sixty, some thirty. Matthew 13:8

– But other seed fell on good ground and yielded a crop that sprang up, increased and produced: some thirtyfold, some sixty, and some a hundred.” Mark 4:8

– But others fell on good ground, sprang up, and yielded a crop a hundredfold.” When He had said these things He cried, “He who has ears to hear, let him hear!” Luke 8:8

Or when speaking to the Lord’s Supper-

– For this is My blood of the new covenant, which is shed for many for the remission of sins. Matthew 26:28

– Likewise, He also took the cup after supper, saying, “This cup is the new covenant in My blood, which is shed for you. Luke 22:20

I find these things fascinating which is why an astute reader’s recent question intrigued me. For brevity’s sake, I will summarize her question as follows: Why does God seek the glory in Ezekiel 38:16 (Gog-Magog defeat), but not in 1 Thess. 4:16 (Rapture)? She writes:

After the Ezekiel war, the world will know that God Himself interviewed on behalf of Israel who could not defend itself against the coalition of forces coming against her (Ezekiel 38:16). God alone will protect and preserve Israel. Further, God will receive the glory for this supernatural act…I just wanted to pose my questions to you because I wonder about the lack of an Ezekiel 38:16 acknowledgment of God in the Rapture event.

To answer this, let’s step back for a moment and look at this from the ‘macro’ or ‘big picture’ view of God’s relationship between Himself and Israel, and Himself and the Church. In Exodus 19:5, we get this public acknowledgment from God to the Israelites as to what their status was always meant to be amongst the nations of the world. They were to be a kingdom of priests who stood apart from the kingdoms of the world as a demonstration of God’s superiority and power over any other so-called god.

“Now therefore, if you will indeed obey My voice and keep My covenant, then you shall be a special treasure to Me above all people; for all the earth is Mine. And you shall be to Me a kingdom of priests and a holy nation.’ These are the words which you shall speak to the children of Israel.”

There were two major covenants applied to the nation of Israel. There was the unconditional Abrahamic covenant which had nothing to do with Israel’s behavior towards, God, but everything to do with God’s unfailing love and protection over the nation. The second was the conditional Mosaic covenant, which was an if/then situation. IF you obey My commands…THEN you will be blessed. IF you do not obey my commands, THEN you will be cursed.

The nation of Israel was meant to be a light unto the nations. They were chosen to host the bloodline of the Messiah, who would take away the sins of the world. They were given the truth, and every advantage (should they remain faithful to God) to demonstrate the mercy and goodness of our Creator. Of course, we know how history turned out and in the end, they ended up crucifying their own Messiah (albeit, with the help of the Gentiles).

Nevertheless, God foreknew this and despite Israel’s unfaithfulness, God will still use them to demonstrate to the world His perfect ability to keep His promises to their forefathers. This is why God’s promise to the patriarch Abraham precedes God’s conditional promise to Moses. It takes precedent and is also why Moses was not allowed to be buried in the Promised Land as if to say, the works of the Law had no place inside the Promised Land. (See Deut. 34:1-4).

Now, when we look at the Church, we do not see her at all in the Old Testament. She was a mystery kingdom that God foreknew before the Creation of the World (Eph. 1:1-3) but chose to keep a mystery only to be revealed until the right time. The right time required the Son of God to be the forever, perfect, sacrifice that through His death, would conquer death and hell. We were to be a ‘royal priesthood’ (1 Peter 2:9), not after the order of Aaron, but through Christ (i.e., the Melchizedekian Line). This is why the Mystery Kingdom parables (Matt. 13, Mark 4, and Luke 8) were a mystery the disciples struggled with understanding. It wouldn’t be fully understood until it was given to the Apostle Paul many years later to explain in his epistles. 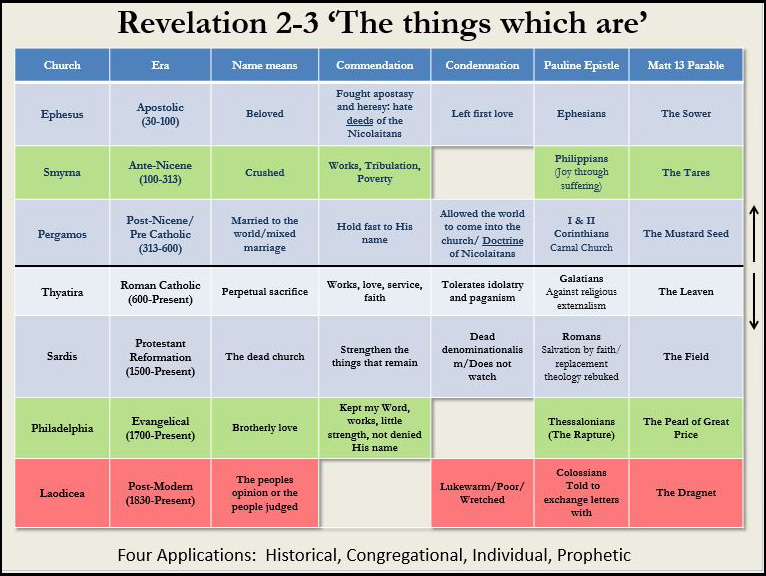 As it stands (Biblically and prophetically speaking) Israel was always meant to be a symbol to the nations. The Church was always going to be a mystery until being revealed at the last moment. As I mentioned earlier, we were never meant to be a backup plan or plan B.

Rather, just as God chose Israel from the foundation of the world, God chose the Church before the foundation of the world. (Matt. 25:34, Eph. 1:4). Subtle difference, but a difference nonetheless. God knew the nation He bequeathed both unconditional and conditional promises to, would ultimately kill His Son. But in so doing, so would open up salvation for all mankind. And God, still demonstrating His faithfulness, would receive the glory publically through His supernatural deliverance of the nation of Israel throughout mankind’s history, as well as the coming 70th Week of Daniel as a demonstration of His power.

The Church on the other hand, by grace through faith, would become the kingdom of heaven in their midst. We were to demonstrate God’s perfected standard of righteousness. Not that we ourselves are righteous, but through Christ’s shed blood are we made perfect. The Church is the pearl of great price, who is to be the recipient of all of God’s splendor and honor because we were purchased with Jesus’ own blood at Calvary. Perhaps my favorite passages in all of Scripture are found in Ephesians, in which Paul writes –

“But God, who is rich in mercy, because of His great love with which He loved us, even when we were dead in trespasses, made us alive together with Christ (by grace you have been saved), and raised us up together, and made us sit together in the heavenly places in Christ Jesus, that in the ages to come He might show the exceeding riches of His grace in His kindness toward us in Christ Jesus. For by grace you have been saved through faith, and that not of yourselves; it is the gift of God, not of works, lest anyone should boast. For we are His workmanship, created in Christ Jesus for good works, which God prepared beforehand that we should walk in them.” – Ephesians 2:4-10

This is not to say Israel has no part in this, because that would be heresy. Simply look at the gates and foundations for the New Jerusalem (Rev. 21:12-14). Look at the preeminent position Israel will have in the Kingdom Age, with Christ ruling and reigning from David’s throne in Jerusalem (Isaiah 2:1-4). Israel will be brought through that refining fire of the Tribulation and will become the envy of the world. This is why the world hates Israel so much now in the present age (even if they don’t know why they hate her). No, the Church does not replace Israel, we are simply grafted in and make up the other branch/kingdom in God’s divine master plan (Eph. 3:5-7, Rom. 11:25-27).

To summarize my thoughts on why God takes the public glory for Israel’s rescue from the Gog-Magog hordes, but not the Church’s at the Rapture is not merely a change in God’s attitude towards us, but rather, in our positional standing in His divine agenda. The Church was a mystery in the Old Testament. The Church was even a mystery being unpacked by Christ in the Gospels (Matt. 13, 16). The Church was conceived at Pentecost (Acts 2) and would remain in “spiritual utero” (if I can put it that way) from then until the Rapture.

At the Rapture, we are truly and visibly born again (Rom. 8:22-25). You see, when one is born again in our present state, that means our dead spiritual nature is revived and made into a new creation (John 3:3-5, 2 Cor. 5:17), but our new creation status is not yet fully complete, because we still exist in our fallen fleshly state. It is at the Rapture when our physical state goes from mortal and corruptible, to immortal and incorruptible, that we finally become whole, in the truest sense of the word. Just as John put it in 1 John 3:1-3, it is not until the Rapture that we (the Church) will finally be revealed for who we truly are, the Sons of God in Christ (Gal. 3:26-27).

As for Israel, God will continue to use her to demonstrate His very public and visible power and glory. Not just at Gog-Magog, but throughout the entirety of the 70th Week of Daniel. From the Two Witnesses and the 144,000 to the fleeing and sheltering in the wilderness (Rev. 12) and the Second Coming (Zech. 14, Rev. 19). Israel will be used as a very public symbol to the world of His enduring power and faithfulness. In the end, we are the two branches that God will use to conclude this dispensational age of ages, and into the eternal order of the ages.

“Eye has not seen, nor ear heard, Nor have entered into the heart of man The things which God has prepared for those who love Him.” – 1 Corinthians 2:6-9

https://www.raptureforums.com/pete-garcia/the-mystery-of-the-kingdoms/
You must log in or register to reply here.

Ready or Not, Here It Comes