The Four Types of Messianic Prophecy

A close examination of the prophetic word reveals the fact that there are four general types of messianic prophecy. These must be understood thoroughly if one is to have an intelligent grasp of the Scriptures. A failure to recognize any one of them is to lose, to that extent, the proper perspective of the prophets. That this statement is true is immediately evident to the one who is familiar with Jewish interpretation of predictive prophecy, their failure to recognize the true Messiah, when He came, and the tragic results that have followed that fatal mistake. Jesus well said to the leaders of Israel on the last day of His public ministry: “Ye do err, not knowing the scriptures, nor the power of God” (Matthew 22:29). In speaking in the synagogue of Antioch in Pisidia, the Apostle Paul declared that “they that dwell in Jerusalem and their rulers, because they knew him not, nor the voices of the prophets which are read every sabbath, fulfilled them by, condemning him” (Acts 13:27). 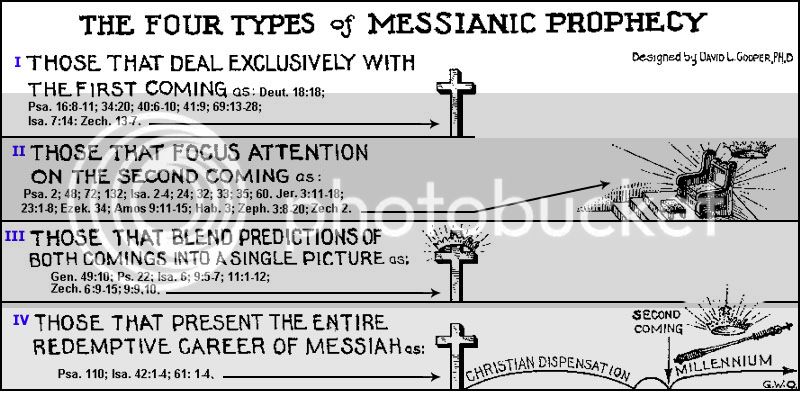 Israel's failure to recognize the Messiah was not due to the fact that she did not have men qualified, intellectually and educationally, to understand the messages of the prophets; for there were many illustrious, devout students in the nation of that time. Moreover, their failure was not due to a lack of faith in God and in His word. Furthermore, one cannot attribute it to an obstinate perversion of heart, which blinded their eyes so that they could not understand the truth and recognize their true Messiah. It was as Jesus said: They knew not the Scriptures nor the power of God. It was as Paul said: They knew him not, nor the voices of the prophets. These two statements substantiate the historical facts. It is true that there were then, as now, people who would not receive truth, but who chose their own ways rather than those of God. It is also true that there were then, as now, hypocrites among the people (Matthew 23). Wherein then lay the trouble? The answer is this: The leaders were blind guides of the blind (Matthew 15:14). The nation, with few exceptions, therefore, fell into the ditch of banishment from their land and rejection by the God of their fathers.

Why were the leaders so blind that they did not recognize the Messiah in the person of Jesus of Nazareth? The answer is to be found in our present study.

There are four lines of predictive prophecy relating to Messiah. They are indicated on the chart above. Any unbiased person who has no theory to support but who wishes facts and truth can recognize these distinctive types. One must be very careful and study the entire connection in which any given prophecy appears in order to see the exact import of the given oracle.

The first of these four classes contains the predictions that focus attention upon the first coming of the Messiah, His sufferings, and His return to God in heaven. When a person studies the entire context of each passage, he will see that there are very few prophecies that speak only of the first coming and the sufferings of Messiah.

The second class is far more numerous. This type of prophecy focuses the attention upon the second coming of our Lord and the glories that will be manifest at that time. On the chart above I have noted, of course, only a few of them; but these scintillate with such dazzling and glorious splendor that they immediately attract the eye and the heart of the reader. Especially is this true with reference to those who are in sorrow and distress and who long for deliverance.

In the third class, which is not quite so numerous as the second, fall those predictions which blend descriptions of both comings into a single picture. This fact is represented graphically on the chart above, which places the crown of glory upon the cross. From this type of prediction, one would gather that the sufferings and the glories are simultaneous. Typical passages are noted under Section III of the chart above.

The fourth type of messianic prophecy consists of those predictions which lay before us the entire redemptive career of King Messiah. See Section IV of the chart above. All four of these classes are essential in order to present all the facts; but, when we study the fourth type — especially in the light of the historical past — it becomes immediately evident that this group of predictions are possibly the most important. In each of the first three, we get only a partial view of the facts concerning Messiah's redemptive work; but in the fourth one, we have a blueprint of Messianic Times laid before us, which consists of the first coming of King Messiah, the entire Christian Dispensation, the Tribulation Period, and the millennial reign of our Lord. When a person reads Isaiah 42:1-43:7; Isaiah 52:13-53:12; Isaiah 61:1-3; Isaiah 62:1-63:6; Isaiah 65:1-25; and Psalm 110, together with numerous other passages, he sees immediately that in these scriptures there is unrolled before him the blueprint of the entire redemptive career of King Messiah — a panorama of His redeeming labors.

One who studies these passages carefully can instantly see the place into which each of the first three types fits. (May I urgently request the reader to study carefully all the scriptures referred to on the chart above, and then examine the discussion of the passages in Isaiah on Messiah's redemptive work.)

Men do much wishful thinking. Israel did that — especially during times of trouble and disaster. During the Maccabean struggle and the Roman occupation of Palestine, the hearts of the leaders of Israel turned wishfully to the future. They scanned carefully those predictions which speak of Messiah's glorious reign. Nevertheless they largely overlooked those passages which refer to the first coming. They were confused by the third type and gave little attention to the fourth class. The second group of passages loomed largely before their eyes and in their thinking. As the Messiah did not appear in the role expected, they were disappointed and did not recognize Him although He came on-time and in the manner foretold by the prophets.

Let us profit by Israel's mistake. Let us study the Word of God as did Ezra: “For Ezra had set his heart to seek the law of Jehovah, and to do it, and to teach in Israel statutes and ordinances” (Ezra 7:10). If we do this, we shall see the truth, which makes one free.
You must log in or register to reply here.