mattfivefour said:
I agree with Sean. And that is why I am not prepared to accept that the "Babylon" of Revelation is necessarily the original Babylon in Iraq. For it to be would contradict God's own prophecy in Jeremiah 50:39 ... presuming that the indefinite pronoun (it) in this verse refers to the city and not to the country. If it is synecdoche and therefore actually refers to the country then it is a prophecy yet to be fulfilled since Iraq obviously still exists. If it is literal and refers to the city, then it is a fulfilled prophecy, and were Babylon ever to be inhabited again it would make it a failed prophecy ... which it cannot be. Therefore I interpret (not to hijack this thread) but I interpret the Revelation "Babylon" to be a different place.
Click to expand...

Not to throw a "monkey wrench" into things, but this was Joel Rosenberg's e-mail post for 29 June:

BABYLON IS BEING REBUILT, JUST AS PROPHESIED
​
​
By Joel C. Rosenberg

(Washington, D.C., June 29, 2009) -- Keep your eye on Iraq. As the country once wracked with unimaginable violence becomes increasingly stable and secure, direct foreign investment is going to flood in, and the region once known as "Babylon" and "Babylonia" will become the wealthiest country on the planet.

Exxon Mobil, the world's largest [oil?] company, for example, is positioning itself to become a major investor in the Iraqi energy sector. Other major oil companies are doing the same. The Iraqi government in recent months has been developing investment incentive packages to draw in such companies. This week, in fact, such energy companies will actually begin bidding for licenses to develop Iraq's immense but badly atrophied oil exploration, drilling, and refining industry. Consider this morning's headline from the Associated Press: "World's big oil companies prepare for return to Iraq."

And this is just the beginning.

Regular readers of this weblog and my books know that Bible prophecy says ancient Babylon, Iraq will be rebuilt and become the greatest center of wealth, commerce and power in the "last days" of history. The books of Isaiah, Jeremiah, Ezekiel and Revelation are explicit on this subject. Skeptics and cynics abound, to be sure, but the fact is the actual ancient city Babylon is being rebuilt right now, in part with U.S. taxpayer funds. Iraqi leaders hope that eventually millions of tourists will come to visit, and real progress is being made.


# Soldiers with the 172nd Infantry Brigade are exploring the ruins as part of a U.S.-Iraqi effort to preserve the ancient city and plan for the return of Western tourists.
# Members of the brigade’s 2nd Battalion, 28th Infantry Regiment escorted a group of U.S. heritage tourism experts to the ruins last week for the first of several visits to develop a preservation and tourism plan for the area. U.S. and coalition troops have been criticized in the past for damaging and contaminating artifacts. In a 2006 report, the head of the British Museum’s Near East department said that, among other things, military vehicles crushed a 2,600-year-old brick pavement, and sand and archeological fragments were used to fill military sandbags. Now the rapidly improving security situation in surrounding Babil province has persuaded the U.S. State Department and the Iraqi State Board of Antiquities and Heritage to embark on the preservation project, dubbed the Future of Babylon Project.​
To read the rest of this column -- including the latest on the rebuilding of Babylon and how Exxon Mobil and others are preparing to invest heavily in Iraq -- please click here ​

I believe it's true, another article from today can be found here:

Rebuilding Babylon as a historical tourist attraction makes perfect sense, even more than rebuilding it as a viable city.

All the prophetic pieces are really coming together with such alarming speed, my head is spinning!!!

I love Joel Rosenberg as a brother in the Lord. However, the way I look at this is that "Babylon" is not the focus of the 'last days" -- Jerusalem is the focus.
Moreover, "Babylon" is not a literal city in these last days. 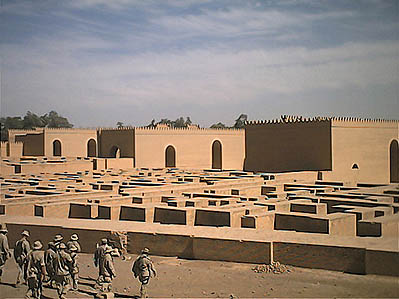 As for the "Babylon" mentioned in The Revelation of Jesus Christ, it is not a literal resurrected city of "Babylon", but, as The Word clearly says it is a figurative Babylon. There's a single verse, Revelation 14:8, which makes this clear. The entire chapter of Revelation 17 explains this single verse in detail. This is clearly the beast system. It is Rome. It may even be the Vatican. And the same goes for Revelation 16:19 where this single verse (which occurs in the 7th bowl judgment) is explained in detail thoughout Revelation 18.

I believe sound exegesis of The Word makes these things abundantly clear.
W

There is so much in God's Word that believers often debate about... in this instance, I believe that Sean is "mostly" right regarding Babylon... and the rebuilding. Jerusalem, indeed, will be the focus of the last days. All other cities will pale in comparison to the events unfolding around Jerusalem.

However, in regards to the rebuilding of Babylon... often in the Word of God, specific topics or subjects can have more than one meaning - from the Holy Spirit's (God's) point of view. The examples of this are too numerous to mention, but you can see some examples of this when Jesus spoke in parables. Babylon, spiritually, refers to the kingdom of the Adversary in regards to the "kingdoms" of the world (statement summarized for brevity). Babylon, figuratively, stands for the lust of the eyes, the pride of life, the desire to be "as God" - basically, it is representative of the "riches of the world(again, statement summarized for brevity). The rebuilding of the ancient city of Babylon is indicative of the current state of the world in which the primary incentive is money, greed, the attraction of the lust of the eyes.

The "people" responsible for making the decisions behind the rebuilding of Babylon - and the evil which it represents - do not care about the things of God, nor what Babylon represents... the only thing they care about is the dollars flowing in... and furthering the cause of their "king" - the Adversary.

Will Babylon - the rebuilt city - have a role in the last of the last days? Yes, I believe it will... as I believe Baghdad will have a larger role to play in the "last" of the last days of the end times... but those roles will pale in comparison to the role that Jerusalem will take as the time of Armageddon draws near...
You must log in or register to reply here.
Share:
Facebook Twitter Reddit Pinterest Tumblr WhatsApp Email Link
Top