The experimental aircraft could fly as soon as 2021. 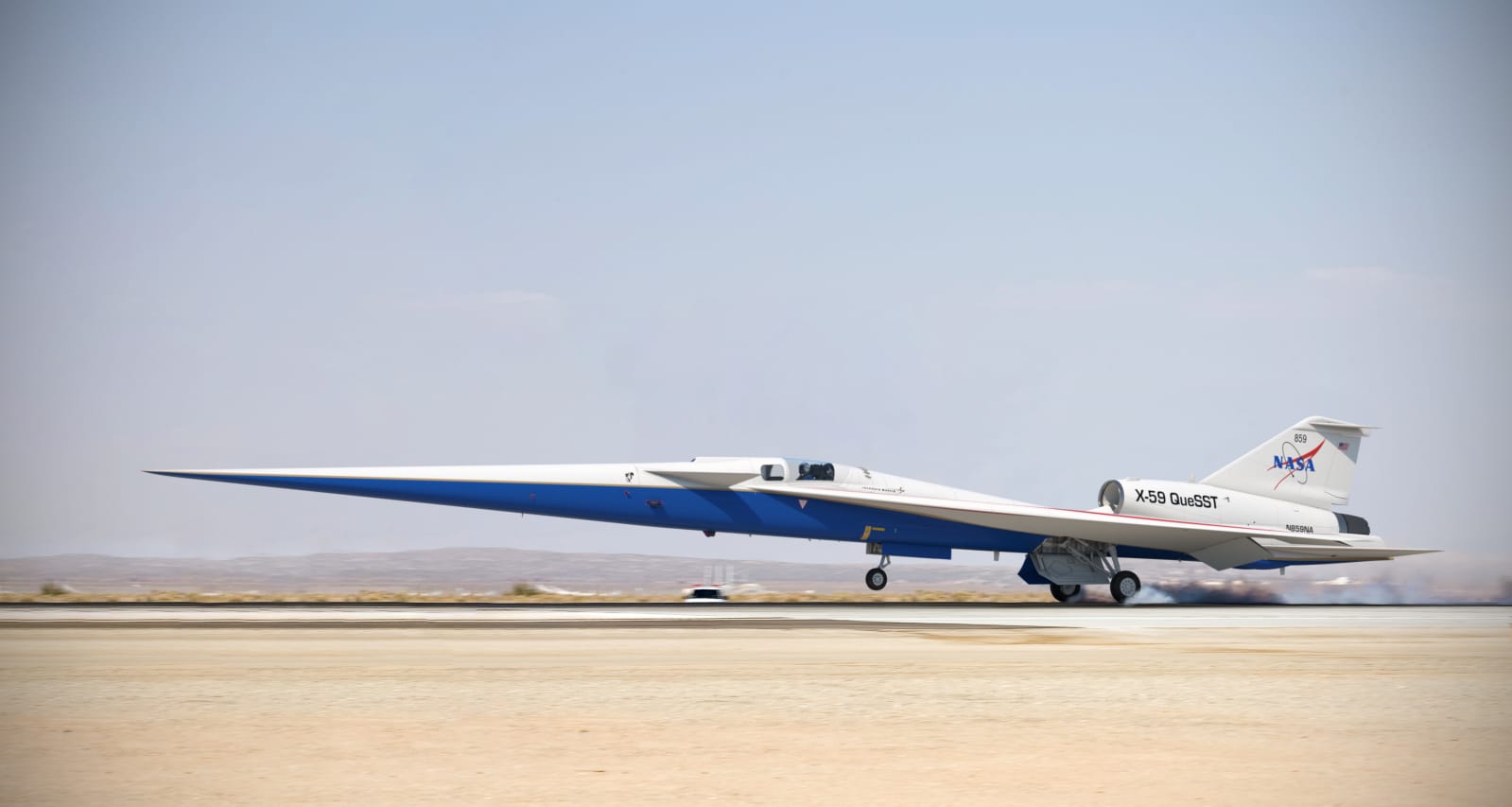 NASA's experimental X-59 jet, which could make supersonic commercial travel a reality, has been cleared for final assembly. The X-59 Quiet SuperSonic Technology (QueSST) aircraft, designed by Lockheed Martin, could take its first flight as soon as 2021.
This is NASA's first large-scale, piloted x-plane (or experimental aircraft) in more than three decades, and its goal is to reduce the loudness of a sonic boom to more of a sonic thump. When the long, slender jet transitions to supersonic speed, it will make about as much noise a car door closing, and since it will be flying 940 MPH at 55,000 feet, that could be essentially inaudible.
NASA will test the X-59 over select US communities to gather feedback, as it has done with the F/A-18 Hornet aircraft over Galveston, Texas. Those tests will help establish new rules for commercial supersonic air travel over land.

Perhaps the craft pictured above is simply for proof of concept for the airframe/engine, because it doesn't look like very many passengers would fit in there. Then again, I'm not sure how many passengers the Concorde was designed for. Maybe it'll be a first class only kind of flight???

According to Wikipedia, the Concorde carried 92 up to 128 passengers depending on the configuration, and was capable of speeds around Mach 2, approx. 1,300 MPH.

I'm sure that once they get this all tested out that engines, design, and configuration, etc. will all be worked out for large seating, probably higher speeds, for practical use.

antitox said:
I'm sure that once they get this all tested out that engines, design, and configuration, etc. will all be worked out for large seating, probably higher speeds, for practical use.
Click to expand...

I understand the reason Concorde failed was because it just wasn't profitable. Yep, it always comes down to money. Even though Concorde was essentially all first-class seating, and everyone paid a premium for getting to their destination, only the very well-heeled could afford it.
That was 20 years ago, so hopefully, this new version can avoid that pit-fall.

It is my hope that since we now can develop engines that can reach supersonic without afterburner that the flights should become cheaper since it won't be burning so much fuel. Afterburners are gas guzzlers.

To add, back when they built the Concorde, it cost so much to ride on it because we were getting ahead of the technology by trying to make supersonic flight the norm before we were ready. We just couldn't do it back then. But now we have the technology to make it feasible and practical to fly those speeds. The only thing we will have to do is first, get it into production, then second, devise the schedules, flight clearances, and flight paths to keep the skies safe because we're talking about really high speed air traffic.
You must log in or register to reply here.
Share:
Facebook Twitter Reddit Pinterest Tumblr WhatsApp Email Link
Top