SHAME ON YOU, SEATTLE. Cowards won't even show their faces. 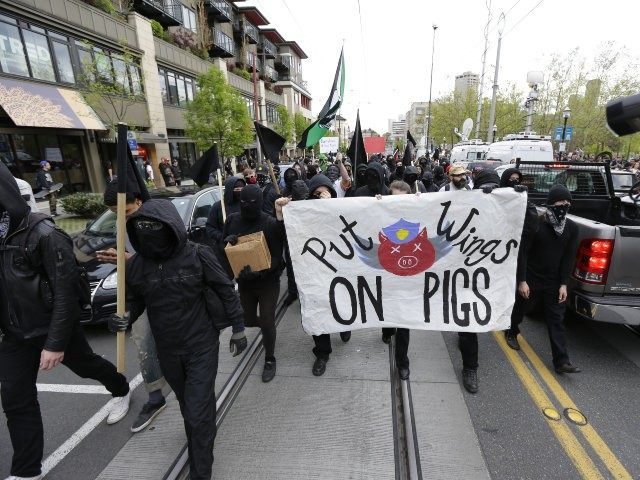 Seattle Police Chief Kathleen O'Toole said one officer had a dislocated shoulder, a second had a broken wrist, and a third had a burn injury to his leg and ankle. They're recovering at Harborview Medical Center.

The injuries occurred at 7:30 p.m. when officers issued a dispersal order to the group and attempted to clear the street at Broadway and Howell, Seattle police said.

Protesters hurled bottles, rocks, bricks, wrenches, and other projectiles at police, who responded by utilizing pepper spray and pepper balls to break up the increasingly violent crowd, police said. They added protestors also began pushing barricades and trash cans into roadways, and raided a fenced construction site for items they later burned in the street.

Capt. Chris Fowler declared the evening event had "turned into a riot."

The protestors marched west to the cusp of I-5 near Pine Street, briefly forcing the closure of the northbound offramp to Olive Street. But several dozen police officers used their bicycles, flash bangs and pepper spray to push the protestors back up toward Capitol Hill and eventually hemmed them in at the Seattle Central College plaza where they began what was billed as an anti-capitalist march.

"The march quickly went violent," Seattle Mayor Ed Murray said. "The officers made the appropriate decision to stop that march at that point."

Rioters severely damaged one media SUV, bashing in its windows and tossing a smoke bomb inside.

In all, officials said 15 men and one woman were arrested for investigation of assault, obstruction, and failure to disperse.

Officers on the scene also recovered weapons and vandalism tools from those arrested. One man who was arrested for throwing a rock through a window in the 1600 block of Belmont Ave. was found carrying a soda bottle filled with green paint, a wrench, and a machete painted with the word "death," according to Seattle Police.

Hundreds earlier joined in peaceful May Day marches in Seattle and Yakima, Washington, in support of workers' rights, an end to police brutality and other causes.

All of them covered in black. Evil loves darkness.

It seems that we are seeing satan and his minions beginning to envelope each of our nation's cities, one by one, in depravity and violence.

This is a malignant cancer that is no longer isolated in one or two parts of the nation. It has now metastasized throughout.

Although I continue to pray for our country, I realize the only hope is the return of our Lord and Savior, Jesus Christ.

This is a tough time to work for law enforcement

Too bad these protesters have nothing to cling to but hate. They act like they have the answers, but the answer they have is if you would only do this then it would be okay. They always blame others or circumstances and never themselves. "if the world would only be a perfect place we would be okay.
You must log in or register to reply here.
Share:
Facebook Twitter Reddit Pinterest Tumblr WhatsApp Email Link
Top