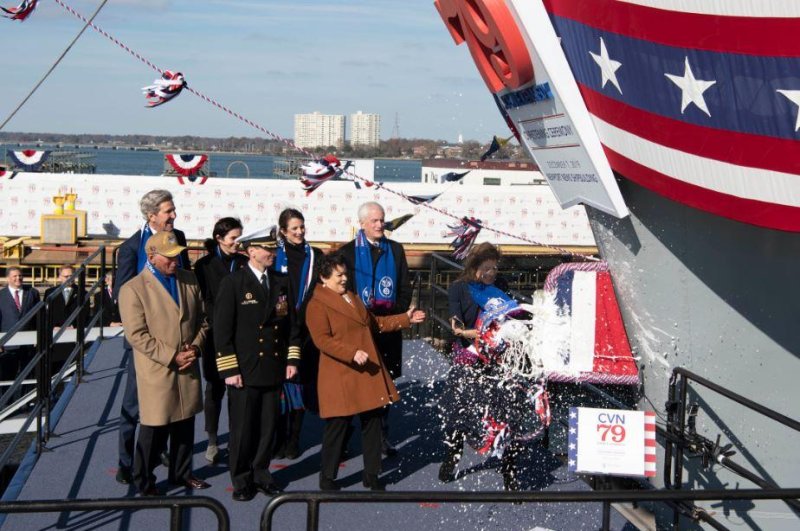 Dec. 9 (UPI) -- The aircraft carrier John F. Kennedy was christened in a ceremony attended by over 20,000 people in Newport News, Va.
Caroline Kennedy, former ambassador to Japan and the late president's daughter, sponsored the vessel and ceremonially smashed a bottle of sparkling wine across the bow of the PCU, pre-commissioning unit, John F. Kennedy on Saturday.

The nuclear-powered aircraft carrier will receive its "USS" designation when it is formally commissioned in 2020, and is currently referred to as CVN 79.
"I'm so proud to be the sponsor of this ship and bring her to life," she said. "The CVN 79 crew is fortunate to have such distinguished leaders, this is your day, and our chance to say thank you."

The vessel is the second in the new Gerald R. Ford-class of aircraft carrier and was launched three months ahead of schedule.
The Kennedy includes an upgraded propulsion system, an electromagnetic aircraft launch system, advanced arresting gear, advanced radar and integrated warfare systems, and other new systems. The ship, 1,106 feet long, is designed to carry up to 90 aircraft.
"Today is the anniversary of the attack on Pearl Harbor, a day that forever changed the lives of brave American warriors like John F. Kennedy and transformed the way we fought as a Navy," Thomas B. Modly, acting secretary of the Navy, said at the ceremony. "Much has changed over the past 78 years, but our nation, and our world, still needs brave American sailors like the ones who will operate and serve on this ship. Kennedy knew what it meant to serve, to lead, and to sacrifice and his legacy will continue with you."

The ship had its "first cut of steel" ceremony in 2011 at the Huntington Ingalls Industries shipyard in Newport News, with more than 3,000 shipbuilders and 2,000 suppliers involved in its construction.
At $11.4 billion, it cost nearly $1.5 billion less than the first-in-class USS Gerald R. Ford, and is designed to save the Navy $4 billion in total ownership cost over its expected 50-year lifespan, with fewer overall components, an extended future drydock interval and ship-wide air conditioning.

I'm hoping they get these new Ford-class carriers working because there's bugs with all the new systems that have to be worked out in the field. 90 planes is a lot of aircraft, then add the extra replacement engines and hardware and it's huge. I think one of the problems that stood out was the elevator system that gets the planes to the deck. That was in the news. And also being configured for the F-35. Anyway, may they get these crafts operational.

I'm really surprised at the size. It's not much larger than the carrier I served on. I was on the USS Saratoga. That was built in the 50's and decommissioned in 1994. I was part of the decommissioning crew.

LoudRam77 said:
I'm really surprised at the size. It's not much larger than the carrier I served on. I was on the USS Saratoga. That was built in the 50's and decommissioned in 1994. I was part of the decommissioning crew.
Click to expand...

Back in 2005, about a year or so before it was decommissioned, I spent about 2 weeks on the previous USS kennedy carrier. We were on it for fleet week, and prior to sailing in to NY we spent 4 days in Boston. The late Senator Kennedy came by for one last look at the ship named after his brother. They had to clear the hangar bay so nobody would see how bad he walked, and that he had to ride the elevator up. He walked about 30 feet from me and I thought “what would happen if I ran out and tackled him”........

fully dependent upon His grace

The Kennedys have a history of a short shelf life, I hope better for this aircraft carrier.
Last edited: Dec 13, 2019

crossnote said:
The Kennedy's shelf life is quite short, I hope better for this aircraft carrier.
Click to expand...

The Saratoga was commissioned in '56 and decommed in '94 so 50 years isn't bad for a carrier. It could last longer. These ships have to stay on the cutting edge to be really effective. After a certain point it's just not cost effective to continue to upgrade them.

If I remember correctly the reactor cores are designed to last for the life of the ship.
That's pretty good, if true.

I'm not sure to be honest. The Saratoga wasn't nuclear. Nether was my first ship, USS McCandless.

fully dependent upon His grace

LoudRam77 said:
The Saratoga was commissioned in '56 and decommed in '94 so 50 years isn't bad for a carrier. It could last longer. These ships have to stay on the cutting edge to be really effective. After a certain point it's just not cost effective to continue to upgrade them.
Click to expand...

My point was that the Kennedys tend to average half the life span of other folks, so hopefully this carrier will do a bit better.
You must log in or register to reply here.

China sends more jets; Taiwan says it will fight to the end if there's war