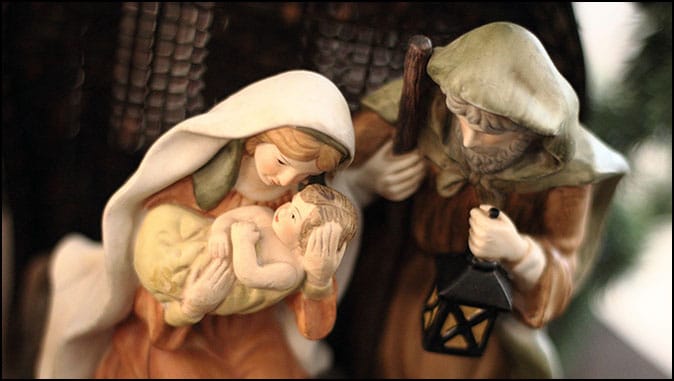 Therefore the Lord Himself will give you a sign. The virgin shall be with child and will give birth to a son, and will call him Immanuel (Isaiah 7:14).

There is perhaps no prophecy in the Old Testament more controversial than this one. Many liberal theologians reject the notion of the virgin birth of Jesus as being simply legend, Jews flatly deny its validity and non-believers scoff at it as the best example of the mindless belief necessary for Christianity to flourish.

Yet a careful study of the history of Israel, the laws of inheritance, and the promises by God to King David lead even the most skeptical student to conclude that Jesus had to be supernaturally conceived to be both God and human, and therefore qualified to redeem mankind, and have a legitimate claim to the Throne of Israel.

Jesus had to be God to forgive our sins. No mere human can do that. One of the charges levied against Him was that He committed blasphemy by claiming the authority to forgive us, a power reserved for God alone (Mark 2:1-7). To prove He had that authority, Jesus healed a paralytic (Mark 2:8-12) right before His accusers’ eyes. The immediate healing was incontrovertible evidence of His authority, derived as a direct descendant of God.

But He had to be human to redeem us. The laws of redemption required that a next of kin redeem that which was lost. (Lev. 25:24-25) This so-called kinsman redeemer had to be qualified, able and willing to perform the act of redemption. When Adam lost dominion over planet Earth and plunged all his progeny into sin, only his next of kin could redeem the Earth and its inhabitants. Since Adam was a human whose Father was God (Luke 3:23-38), only another direct Son of God could qualify. This is why Paul referred to Jesus as the last Adam (1 Cor. 15:45). Since the Laws of sacrifice required the shedding of innocent blood as the coin of redemption, only a sinless man was able (John 1:29-34). Since the kinsman redeemer’s life was required, only someone who loves us the way God does would be willing (John 3:16). This is the real test of the kinsman redeemer. Seeing Jesus as qualified and able to redeem us isn’t a great problem. After all He’s the Son of God. But recognizing that He was also willing to step down from His Heavenly Throne to trade His perfect life for ours should really humble us. What kind of love did it take to voluntarily suffer the pain and humiliation required to redeem us?

The Man Who Would Be King

To my logical mind the issue of royalty is the most intriguing factor related to the virgin birth. The opposite of the mindless belief of which Christians are accused, this one is blatantly logical. Does Jesus have a legitimate claim to the Throne of David under the rules of succession? The answer hinges on two technicalities.

First, God promised David that someone from His family would reign in Israel forever. David wanted to build God’s house, but God declined, saying He needed a man of peace and David was a man of war. So God chose David’s son Solomon to build the Temple and during Solomon’s reign Israel experienced peace as never before (or since). To alleviate David’s disappointment, God promised to build him a “house” making his dynasty everlasting (1 Chron. 17:1-14). From that time forward a descendant of David’s through Solomon’s branch of the family tree would sit on the throne in Jerusalem as King of Israel. But by the time of the Babylonian captivity 400 years later, these kings had become so evil and rebellious toward God that He finally said, “Enough”, and cursed the royal line, saying no son of their line would ever reign over Israel again (Jer. 22:28-30). The last legitimate King of Israel was Jehoiachin, also called Jeconiah, who reigned for only 3 months in 598 BC. Did God break His promise to David?

The second technicality involves the right of inheritance in Israel. God had ordained that Israelites could never sell or give away the allotment of land given to their families during the time of Joshua. “The land is mine,” He declared, “You are but tenants.” (Lev. 25:23) It’s from this declaration that the rules of inheritance and redemption came forth. Family land was passed from father to son through the generations. If a son lost his land, his brother was to redeem it, so the family wouldn’t lose their inheritance. So far so good.

At the end of the Book of Numbers an interesting loophole emerged. A man died without a son, leaving 4 daughters. They came to Moses complaining that they would lose the family land since there was no son to inherit it. Moses sought the Lord, Who decreed that if there was no son in a family daughters could inherit family land providing they married within their own tribal clan. In effect they had to marry a cousin to keep the land “in the family.” This made sense since land was allotted first by tribe then by clan then by family. Marrying within the tribal clan kept the families in close proximity and preserved the tribal allotment. (Num. 36 1:13)

Now compare the 2 genealogies of Jesus in Matthew 1:1-17 and Luke 3:23-38, and you’ll discover an interesting bit of information. Matthew’s account shows that Joseph descended through Solomon, the royal but cursed line, and his father is listed as Jacob. But in Luke 3:23 Joseph’s father is called Heli, and the line is different all the way to Solomon’s brother Nathan before joining Matthew’s account at King David. It turns out that Heli was Mary’s father and therefore Joseph’s father in law. Both Mary and Joseph were descendants of King David.

Here’s the tricky part. Mary had no brothers, and so was entitled to inherit her family’s land as long as she married someone also descended from David. Joseph fit the bill and being in the royal line had a claim to the throne, but carried the blood curse. No biological son of his could ever legally qualify as Israel’s king, but Joseph could secure both Mary’s right of inheritance to her family’s land, and her son’s claim to David’s throne.

When Mary accepted Joseph’s offer of marriage she preserved her family’s land and also made good her son’s claim to the throne of Israel. Her son Jesus legally became Joesph’s son as well. This made him an heir to the throne but since he wasn’t Joseph’s biological son, He escaped the curse. But He was a biological descendant of David’s through his mother and therefore of the “house and lineage of David.”

This whole issue revolves around the facts that; a) God has bound Himself to His own laws, and b) He keeps His word. These are facts that should give you great comfort.

God is not a man that He should lie, nor a son of man that He should change His mind (Num. 23:19). Legally, a virgin birth was required to produce a sinless man who would be qualified and able to serve as our Kinsman Redeemer, and God longed to redeem us. A virgin birth was also required to sidestep the blood curse on the royal line, fulfilling God’s promise to David that a biological descendant of his would sit on the throne of Israel forever.

We’ll Return After This Pause

But what about the 2500 years that have passed since Israel had a King? Remember Jehoiachin was Israel’s last real King. In Ezekiel 21:25-27, written while a descendant of David’s still sat on the throne in Jerusalem, God declared that He was suspending the Davidic line of succession “until He comes to whom it rightfully belongs” a clear reference to the Messiah. This declaration was confirmed to Mary. The Angel Gabriel promised that her coming son would sit on David’s throne and rule over the house of Jacob (Israel) forever (Luke 1:30-33). But all during the life of Jesus, a member of the Herod family served as King of Israel. Herod was an Idumean (Jordanian), a friend of Caesar’s who was appointed to serve as King. So this promised reinstatement is still to come. It will be fulfilled at the 2nd Coming when “the Son of Man comes in His glory and all the angels with him” to “sit on His throne in heavenly glory”. Finally “the Lord will be King over the whole Earth.” (Matt. 25:31 & Zech. 14:4-9).