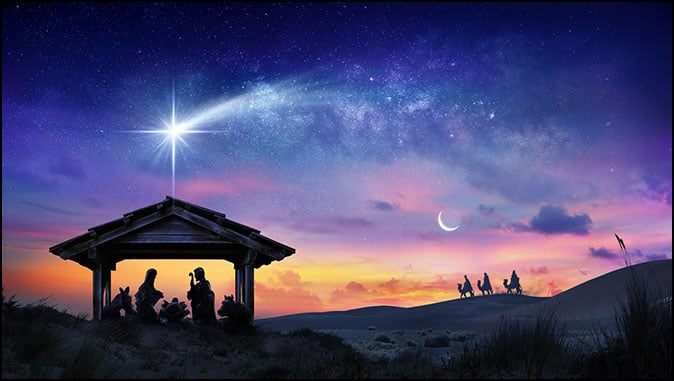 The Glorious Incarnation of God
By Mike Gendron

In our Lord’s descent from His majestic position in eternity past, Jesus was “made in the likeness of men” through a miraculous conception and a virgin birth. The uncreated, infinite and eternal nature of God was fully integrated with the finite, created nature of man. Deity and humanity came together in perfect unity. The majestic brilliance and glory of the eternal Son of God was concealed by the perishable flesh of humanity. He was born like us so that we might become like Him. Jesus had to become one of us so that He could be our kinsmen redeemer.

This is such an amazing testimony of God’s profound and unfathomable wisdom. He provided a way to redeem sinful mankind without violating His unchangeable attributes of holiness, righteousness and justice, while at the same time displaying His love, mercy and amazing grace. “Oh, the depth of the riches, both of the wisdom and knowledge of God! How unsearchable are His judgments and unfathomable His ways!” (Rom. 11:33). Man’s perfect God became God’s perfect man to satisfy divine justice as a sinless substitute for His people. “He had to be made like His brethren in all things, so that He might become a merciful and faithful high priest in things pertaining to God, to make propitiation for the sins of the people” (Heb. 2:17).

The Ultimate Condescension of Christ

In light of this awesome reality, the incarnation of Jesus was the ultimate condescension. The Creator took on the form of the created, and the infinite became the finite. “Although He existed in the form of God, did not regard equality with God a thing to be grasped, but emptied Himself, taking the form of a bond-servant, and being made in the likeness of men. Being found in appearance as a man, He humbled Himself by becoming obedient to the point of death, even death on a cross” (Phil. 2:6-8). The Lord Jesus was born to die as a substitute for His people. As a bond-servant, Jesus carried the burden that no other bond-servant could carry, that is, the sin-burden of everyone who would ever repent and believe in Him.

Christ Has Done What Man Could Never Do

The Lord Jesus did for us what we could never do for ourselves. He lived a sinless life of perfect obedience then offered Himself, the eternal God-man, and cancelled the eternal sin debt for those who repent and believe His Gospel. The perfect High Priest, offered Himself, the perfect sacrifice, to a perfect God who demands perfection, and then declared in victory, “It is finished” (John 19:30). Because of the “joy set before Him, He endured the cross, despising the shame, and has sat down at the right hand of the throne of God” (Heb. 12:2). As our High Priest, He is able also to save forever those who draw near to God through Him, since He always lives to make intercession for them (Heb. 7:25).

The Glorious Exaltation of Christ

God “seated Him at His right hand in the heavenly places, far above all rule and authority and power and dominion, and [above] every name that is named, not only in this age but also in the one to come” (Eph. 1:20-21). His crown of thorns was exchanged for the crown of a King. The suffering Servant was exalted to be the King of kings. “Now to the King eternal, immortal, invisible, the only God, be honor and glory forever and ever” (1 Tim. 1:17). He is worthy of all of our praise and worship now and forever!