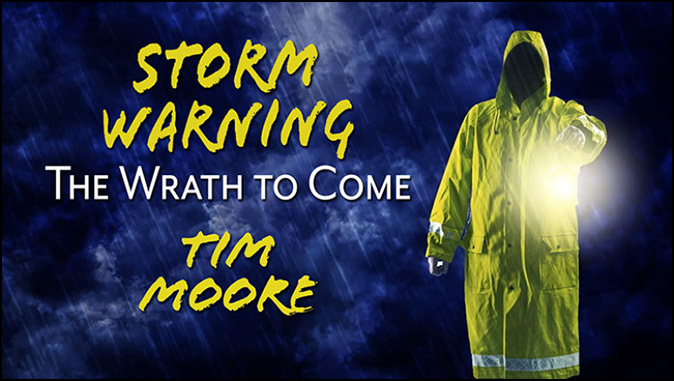 Storm Warning: The Wrath to Come – Part 2
By Tim Moore

In Part 1, we addressed John the Baptist’s message: “Repent, for the kingdom of God is at hand.” We will now look at the prophetic significance of the timing of Jesus’ First Advent.

Joy in the Coming Kingdom

First of all, we know that John was filled with the Holy Spirit. When? From his very conception. So much for the idea that human beings don’t gain personhood until they take their first breath. The Lord God declared that while he was still in the womb, John leaped in the presence of the Lord Jesus Christ. He knew at that point forward that he had a special calling in his life. He preached a baptism of repentance for the forgiveness of sins with great urgency.

Jesus and John the Baptist both declared that the Kingdom of God was at hand then, and yet it is still coming in its ultimate fullness. This prophecy is in itself an example of an “already but not yet” prophetic fulfillment. That is why we are told that when Jerusalem is renamed Yahweh Shammah, meaning “The LORD Is There.” Jesus will reign as King and be called Yahweh Tsidkenu meaning “The LORD Our Righteousness.” He earned will become His title forever: The Lord Our Righteousness.

So, as a prophetic ministry, we often point to the coming of the Kingdom of God. The coming Kingdom will consist first of the earthly reign of Jesus Christ during the Millennial Kingdom, but will be followed by an eternal kingdom where sin and death are destroyed forever. Can you only imagine? God Almighty, who states, “I make all things new,” will be giving you not just a new body, a new mind, and a new heart, but making all things new.

We recently interviewed Joni Eareckson Tada on Christ in Prophecy. Joni is such a joy-filled witness to the joy of the Lord. This lady, who has been wracked by pain that is unimaginable, every day wakes up in excruciating pain, but her heart is overflowing with joy. Does that describe you? What a blessing she is! I hope we have that same kind of enthusiasm in praising our Lord.

Prophetic Significance of the First Advent

What is the prophetic significance of the timing of Jesus’ First Advent?

When Jesus read from Isaiah 61 in the synagogue at Nazareth, He said: “The Spirit of the Lord is upon me because He anointed Me to preach the gospel to the poor. He has sent me to proclaim the release of the captives and recovery of sight to the blind, to set free those who were oppressed, to proclaim the favorable year of the Lord…” He then closed the scroll, sat down, and said what? “Today the Scripture has been fulfilled in your hearing.”

If you go back to the original passage in Isaiah, Jesus stopped reading at what we would call the first half of Isaiah 61:2. The portion of the verse that He did not read goes on to say, “…and the day of vengeance of our God, to comfort all who mourn.” Obviously, Jesus was saying that a portion of Isaiah’s prophecy was fulfilled literally in the hearing of the men there in Nazareth. But, the remainder of that passage would await fulfillment at another time. Remember, Jesus’ message began and was the same as John the Baptist’s. Mark recorded it this way: “The time is fulfilled and the Kingdom of God is at hand. Repent and believe in the Gospel.”

I’ll give you three insights just from this one verse. First of all, the prophecies concerning the Kingdom regarding the appearance of the Messiah had come true. He was there in the flesh in person!

Two, there had been a time set by God for those prophecies to come to pass, and it had finally arrived within the hearing of those people gathered there in that synagogue in the middle of nowhere. What good thing can come out of Nazareth? Who in Galilee has any insight or discernment? Those people must be backward. And yet, that’s where the Lord came from and that’s where most of His ministry was performed. Jesus came from glory in humility to the lowliest, including me.

The third point I bring up from this passage is that the pathway to true reconciliation with God — the Gospel itself — was now open. The long wait for his arrival was fulfilled as He spoke. I think there is prophetic significance to the timing of His First Advent. For example, and I can give you many others, the canon of Old Testament scripture at that point was closed. There’d been a long period with no word from the Lord in terms of Scripture. The oppression and persecution of the Jewish people had become greatly increased. They were crying out much like they had done while living in bondage in Egypt. Hope and the expectation of the true Messiah were beginning to fade.

How do I prove that? Because only two people are documented as having been looking out for the Messiah, the real Messiah, and not some political figure nor some military figure who would lead them to cast off Roman shackles, but the true Messiah — Simeon and Anna.

We know that a historical window was narrowing. What window? Well, the scepter would soon depart from Israel. As a matter of fact, it is estimated that right near Jesus’ birth the Romans removed the power of the Sanhedrin to impart the death penalty. They had lost complete sovereignty, even over their own affairs, which is why they had to come to Pilate seeking permission to put the Messiah to death. Genealogy at that point was still traceable. In A.D. 70, when the Romans completely destroyed Jerusalem, those genealogical records were lost to history.

You could make the claim that God could have delayed and controlled certain aspects of His timing, but certainly as He allowed human history to move forward, the Messiah came during that particular window of opportunity. Why? Because the appointed time had arrived. Again, God is not constrained by history, but weaves His will and His plan into human history as we know it. You and I just have the blessing of being able to see the fulfillment of Bible prophecy that Christians for 2,000 years have longed to witness.

If you go back a hundred years and read some of the writings of people who are looking forward to and yearning for the Lord’s return, they said: “I can’t imagine how Israel is going to come back as an independent nation, but I trust the Word of God that it’s going to happen. I don’t know how He’s going to do it, but He will.” And, He did! The Lord accomplished a mighty work in this day and age by resurrecting the nation of Israel.

The churches must realize what has been happening right before our very eyes but are we too distracted? Likewise, only Simeon and Anna eagerly anticipated the Messiah’s arrival when Jesus was born, for the principle of an appointed time had been laid down long before.

Consider Abraham who was looking for a city whose architect and builder is God. The reality of God’s perfect timing was spoken in His life when our pre-incarnate Lord said to him at the appointed time, “I will return to you.” He never witnessed all of the promises of God fulfilled in his life, but he believed. He said, “Even if he tarries, I know He will keep His promises to me.” These were promises for descendants that outnumber the stars; promises for a city, even though this man lived in a tent his entire life. Abraham was a man with absolute faith.

Well, this appointed time for Jesus’ return has been set by who? By Tim Moore? No! As I’ve said, he would have already been here. Aren’t we glad I’m not the one who decides? Because maybe you would not have trusted in Christ. Or, maybe the young would not have had the opportunity to embrace Jesus as their Savior. The person who determines the appointed time is none other than the Father Himself, who will say, “Go and get your bride!”

In the third and final part of this teaching on the wrath to come, we will learn how to recognize the power of the Gospel of Jesus Christ.