A Shepherd’s Story
A Christmas Story by Jack Kelley

In the same region there were some shepherds staying out in the fields and keeping watch over their flock by night. And an angel of the Lord suddenly stood before them, and the glory of the Lord shone around them; and they were terribly frightened. 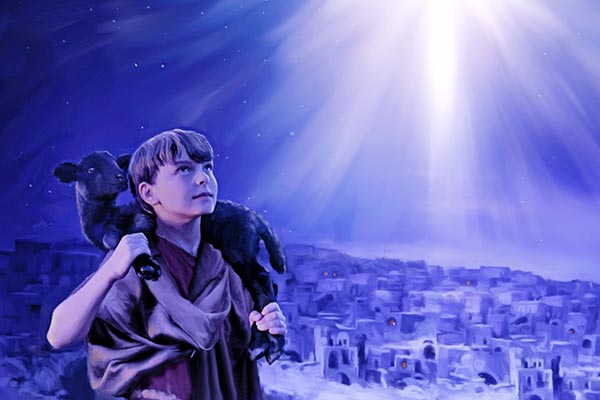 But the angel said to them, “Do not be afraid; for behold, I bring you good news of great joy which will be for all the people; for today in the city of David there has been born for you a Savior, who is Christ the Lord. This will be a sign for you: you will find a baby wrapped in cloths and lying in a manger.”

And suddenly there appeared with the angel a multitude of the heavenly host praising God and saying, “Glory to God in the highest, And on earth peace among men with whom He is pleased.”


When the angels had gone away from them into heaven, the shepherds began saying to one another, “Let us go straight to Bethlehem then, and see this thing that has happened which the Lord has made known to us.”

So they came in a hurry and found their way to Mary and Joseph, and the baby as He lay in the manger. When they had seen this, they made known the statement which had been told them about this Child. And all who heard it wondered at the things which were told them by the shepherds. But Mary treasured all these things, pondering them in her heart.

The shepherds went back, glorifying and praising God for all that they had heard and seen, just as had been told them. (Luke 2:8-20 NASB)

I was just a kid when it happened, barely old enough to be out in the fields with the older shepherds. For the first time, my dad had said I could stay with them all night. I was so excited! It was around the time of the Fall Feasts and we were tending the Temple flocks in the fields outside of Bethlehem. Later, people would try to say that the story I’m about to tell you took place in December, but that’s crazy because nobody would have had their sheep in the open fields that far into winter. It was too cold and a sudden storm could put them all in grave danger.

No shepherd could afford to take that risk even with ordinary sheep, and the sheep we were watching were different from all others. The priests bred them especially for use as sacrifices in the Temple. Because of this, they had to be perfect, without a spot or blemish anywhere on their bodies. These were lambs whose only purpose in being born was to die as an offering for the sins of the people. They were very valuable and watching them was important work.

You see, sheep are prone to wandering. It’s the shepherd’s job to keep track of them, and to bring them back when they stray. We also keep the predators at bay, the wolves that would sneak in among the flock and carry the weak ones off. We’re responsible for them, and it’s our job to see that none are lost.

After dinner we were getting the camp ready for the night, making one last check to be sure that all the sheep were accounted for and weren’t being distracted by the torch light from the constant stream of visitors in the distance heading for Bethlehem.

Bethlehem was becoming more crowded than I’d ever seen it because the governor had called for a census and everyone in Israel who was descended from King David had to come here to register. David had lived almost a thousand years earlier, and had four wives, so you can imagine how many descendants he had, and they were all coming to Bethlehem. Our little town was filled to overflowing and some had given up even trying to find rooms.

That’s another good reason this story couldn’t have happened in the dead of winter. People just couldn’t travel then, it was too cold and wet to camp in the fields along the way. Remember, some had to travel several days, all the way from beyond the Galilee up north, to get here.

We had just settled down by the fire when suddenly an angel of the Lord appeared to us from out of nowhere. I was terrified! I’d never seen anything like it. But I wasn’t the only one. Even the seasoned veterans were scared. But the angel spoke to us and said, “Do not be afraid. I bring you good news of great joy that will be for all people. Today in the town of David a Savior has been born to you. He is Messiah, the Lord! This will be a sign to you. You will find a baby wrapped in swaddling cloths and lying in a manger.”

Suddenly the star filled sky opened up and a great company of angels appeared with him.  They were all praising God and singing, “Glory to God in the Highest, and on Earth peace to men with whom He is pleased.”

There’s no way I could even begin to describe the sound of that choir. A couple of times later in my life I heard the musicians that rich people hired to help them celebrate when their first son was born, but not even the wealthiest King could have afforded a choir like this one. The music caused us to lift our faces and our hands to the heavens. It filled our ears and our hearts and was by far the most beautiful sound I ever heard in all my life.

When they faded away and left us we just stood there for a minute looking at each other, our eyes filled with wonder, tears of joy streaming down the weathered cheeks of my father and his friends. They had heard all the talk about a coming Messiah, but none of them ever expected to see Him. And now, not only would we see Him; we would be the first! One minute we were finishing up a long shepherd’s day just like always, and the next we were witnessing the invasion of Earth by Heaven itself. Eternity had entered time and the Son of God had become the Son of Man, almost right before our eyes. This had been my first day as a real shepherd, and there would never be another one like it.

Mindful of our responsibility, we left a couple of our number to watch the sheep, and the rest of us took off for Bethlehem in search of the sign the angel had told us to look for. And sure enough, in a stable behind the inn at the edge of town, we found them.

A man with the clothing and calloused hands of the working class stood protectively over a radiant but obviously exhausted young woman who didn’t look much older than I was. In the manger before her was a baby, a normal looking healthy baby boy. “Can this be what God looks like,” I thought, “He’s just a baby.” Like most people, I expected that if I ever saw God He’d be a giant Warrior King with a huge sword and a menacing look. This baby looked so small and fragile.

Others were beginning to gather around as well, because we’d shouted at everyone we saw on the way in to follow us. Now we told them the whole story of what we’d experienced in the field with the angel and the choir, and that we had come to town to see for ourselves if what we heard was true. They were all amazed and couldn’t stop talking about it, but the new mother just sat there with her baby as if she was soaking up every detail of this most blessed of all blessed events. I’ll never forget the look in her eyes or the expression on her face.

The man, who I found out was named Joseph, and the woman Mary stayed in Bethlehem through the winter. Remember, I said that no one travels voluntarily after late fall, especially heading north with a new born baby. They found a house and settled in.

Some time later there was a big fuss as a caravan of rich priests called Magi arrived from Parthia, a country near Israel that had been part of the Persian Empire. They called the baby the King of the Jews, gave him expensive gifts and money, and bowed down before Him to worship. Somebody said the Magi had been waiting for this time since the Hebrew Prophet Daniel had told them about it 500 years earlier. They had handed the secret down from father to son through all that time. People even said the gold they brought was Daniel’s personal gift to the Messiah.

After the Magi left, things were quiet again for a few days, but then Joseph suddenly took Mary and the baby away secretly in the middle of the night. The next morning Herod’s soldiers swept into town, searching from house to house, killing all the male babies. They were looking for the One the Magi called King of the Jews because Herod didn’t want any competition for the throne, but He was gone. We heard that Joseph had been warned in a dream and had taken Mary and the baby south to Egypt where they could hide from Herod. It’s a good thing those Magi had come. Their gifts paid for the family’s escape and their stay in Egypt.

The next time I heard about the baby was 30 years later, after we had both grown up.  People were talking about a prophet named Jesus from Nazareth.  They said He might be the Messiah. I remembered that Joseph and Mary had come from there, and so I decided to investigate. Walking north for several days I finally found Him by the Sea of Galilee and as I listened to Him speak, my heart was filled with hope. I especially liked how He called Himself our shepherd. He promised to keep us from wandering, and to protect us from predators who would try to steal us away. And He swore that He’d never lose a single one of us, just like we promised the owners of the sheep we watched. I knew in my heart He really was the Messiah.

Later, I was there in Jerusalem when He was executed. As He breathed His last, I became convinced that I’d see Him again just like He promised. Three days later I did see Him, and knew that all of the angel’s promises had come true in the life, death, and resurrection of the Baby from Bethlehem. He wasn’t the King we expected, but He was the One we needed. He was our Savior, our Messiah.

Looking back on that night, I realize that many will never understand what happened there. I was an eyewitness and I barely understand it myself. But I know this. On that night in Bethlehem a group of shepherds became sheep, and the Lamb of God became our Shepherd. Merry Christmas.

Troubles of a Two-State Solution

Lebanon’s PM Saad Hariri Steps Down The impact on Lebanon and the region. By Joseph…

The Story Behind Israel’s Flag