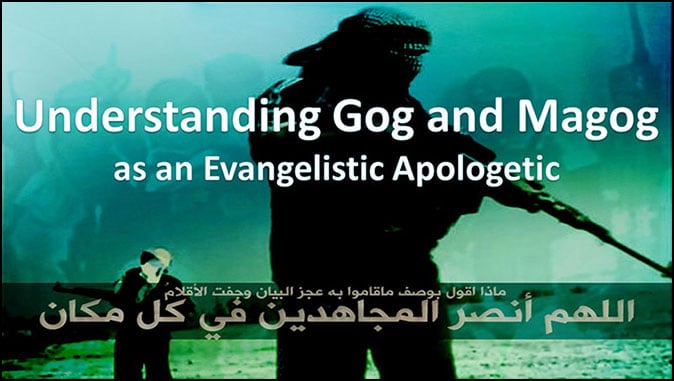 Understanding Gog and Magog (Part 2 of 7)
By Nathan Jones

In Part 1, we began to get a handle on exactly what nations are involved in the prophetic Gog-Magog War as revealed in Ezekiel 38-39. Now we will attempt to prove that ancient Rosh is modern-day Russia. Continue on in this academic presentation made by evangelist Nathan E. Jones!

The final nation to be explored in Ezekiel’s list is Rosh. Could it be modern-day Russia? As one author queried, “Will the old Russian Bear come out of its quarter-century hibernation and again sound a roar that shakes the world?” Properly identifying Rosh is important for identifying the timing of the Gog-Magog Battle.

The difference is the challenge for the translators to either interpret the Hebrew word “Rosh” as a noun indicating an actual landmass, or as an adjective that according to the Hebrew-Greek Key Word Study Bible means “an exalted one” such as a king, sheik, captain, chief, or prince. The NAS translators chose the noun form of “Rosh,” while the NIV translators chose the adjective form. Translations based on the Greek Septuagint (LXX) follow the noun form, while those based on the Latin Vulgate follow the adjective form.

Support for the use of the noun interpretation of “Rosh” as a distinct landmass identifiable as modern-day Russia points to the validity of this interpretation for several reasons:

1. Various Hebrew scholars, such as G.A. Cook, believe the noun form of “Rosh” is true to the original Hebrew.

2. Other scholars, such as John Walvoord, explain that: “In the study of how ancient words came into modern language, it is quite common for the consonants to remain the same and the vowels to be changed. In the word ‘Rosh,’ if the vowel ‘o’ is changed to ‘u’ it becomes the root of the modern word Russia.”

3. The Septuagint (LXX) translation predates the Latin Vulgate by 700 years and is only three centuries removed from the time of Ezekiel, making it a translation more contemporary with Ezekiel.

4. Tenth Century Byzantine writers, such as Ibn-Fosslan, identified a group of Scythians dwelling in the northern parts of Taurus upon the river Volga as the Ros.

6. Even farther back as early as 2600 B.C., ancient Egyptian and other Middle-Eastern inscriptions and texts, such as in Sargon’s inscriptions, on a cylinder by Assurbanipal, in an annul by Sennacherib, and five times in Ugaritic tablets, all record the existence of the Rosh/Rash/Reshu people.

7. The early Byzantine Church claimed that the Ros were the people who lived far north of Greece in the area today known as Russia.

8. Rosh is supposed to be “from the remotest parts of the north” (Ezekiel 39:1-2 NKJV). No other nation exists more directly north of Israel and is more remote than modern-day Russia.

9. Current news reports repeatedly show that Russia has very quickly solidified economic and military ties with the nations involved in the Gog-Magog coalition. Russia is building a nuclear reactor in Iran and arming Islamic nations. Russia has gained a foothold in Syria due to the Syrian civil war for the purpose of controlling the Middle East’s vast oil reserves. Israel’s Mediterranean gas deposits are seen as a direct threat to Russia’s monopoly of the natural gas supply to Europe.

10. Russia nationally has held a long and historic anti-Semitic violent streak that God would not leave without a response.

When all arguments for Rosh being Russia are put on the table, it is clear that Russia descended from the Rosh people.

In the third part of this academic presentation about the prophetic Gog-Magog War of Ezekiel 38-39, we will identify the general timing clues the prophet left us.

The Battle of Ezekiel 38-39...Part 2 A Bible Study by Jack Kelley Achieving even a…