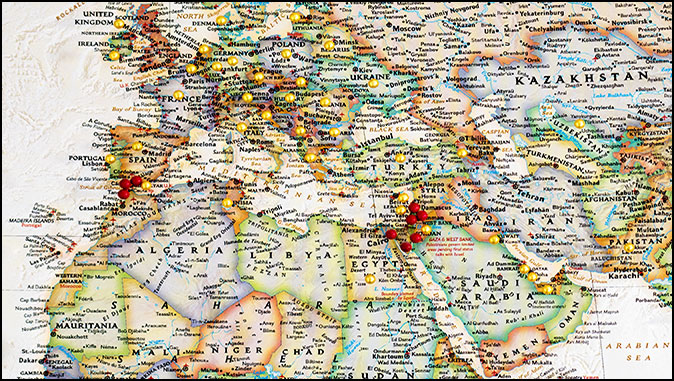 An In Depth Look at the Modern Equivalent to Biblical Names in Ezek. 38
By Jack Kelley

Many of the nations we hear about in today’s news existed in ancient times but under different names. By using the ancient names for the countries He prophesied about, the Lord made possible the use of scripture to interpret scripture. Much of the information below can be gained by referencing Genesis 10, the so-called Table of Nations, in a good study Bible. Learning the modern names of the nations whose founding families are listed there really helps connect Bible prophecy to current events.

I believe that Gog is a supernatural being (showing up in the battle of Ezekiel 38 and the final battle at the end of the Millennium) perhaps Satan’s counter part to Michael the Arkangel. There is an obscure reference in the Septuigent translation of the Book of Amos in 7:1 to a Gog, King of the Locusts, for what that’s worth. You won’t find any hint of this in translations rendered into English from Hebrew. You can only get there from the Greek (Septuigent) translation. But with no connection to any physical territory or people as there is with Magog and the others named in Ezekiel 38, and with Biblical appearances so far apart in time, there’s good reason to believe that Gog is a non-human character, one of Satan’s own.

In contrast, there are over 130 historical references tying Magog to the ancient Scythians. In Colossians 3:11 Paul mentioned the Scythians. The Strong’s concordance identifies a Scythian as an inhabitant of Scythia or modern day Russia. The Great Wall of China was known as the “Ramparts of Magog” in ancient times and was built to protect China from Magog. Magog was a son of Japeth and inhabited central Asia. His children, the Scythians, are the ancestors of today’s Russian people.

These two were brothers of Magog and are linked to the same general area, but more likely with the Turkic people. Josephus associated Meshech with Cappodocia, home of the ancient Hittite Empire in Eastern Turkey.

This one’s easier because the name changed to Iran in our memory.

These two were sons of Ham and brothers to Mizraim (which means “two Egypts”) and Canaan. Narrowly they are called Ethiopia (Cush) and Lybia (Put) but both were in possession of much larger territory in the past. The word Cush has a Hebrew root meaning black, and can be representative of the black races of Africa, while Put can represent the north part of the continent; Algeria, Tunisia, Morocco, Mauritania, etc. Note that all are sons of Ham and therefore not Semitic. The common denominator among African nations is religion (Islam) not race (Arab).

Another son of Japeth and brother to Magog, Gomer inhabited the Rhine and Danube valleys, and can be associated with Eastern Europe of today.

Beth means house in Hebrew. Togarmah was a son of Gomer. The Armenians of today call themselves the House of Togarmah. The Turks (but not the Kurds, who are the ancient Medes of Media-Persia fame) are also included, and they’re the ones Ezekiel had in view.

These two are first mentioned as grandsons of Cush in Genesis 10:7. Later, in Genesis 25:3, we read of two grandsons of Abraham’s named Sheba and Dedan as well, born to Jokshan, a son of Abraham and his 2nd wife, Keturah. It’s not clear which pair of grandsons is being referenced, but commentaries none-the-less identify these two as probably representing the nations of the Arabian Penninsula, notably Saudi Arabia.

According to archaeologists W. F. Albright and Wendell Phillips, Sheba was on the southwestern edge of the Arabian Peninsula across the Red Sea from present-day Ethiopia. Sheba is known in history as Saba in Southern Arabia, the Sabaeans of classical geography, who carried on the trade in spices with the other peoples of the ancient world. Dedan was probably the habitat of the Arabs on the northern part of the Arabian Desert, which is modern-day Saudi Arabia. The ancient capital of Saudi Arabia is still called Dedan on many maps today.

Tarshish was a son of Javan, who settled the area of Southern Greece. There are three schools of thought where Tarshish is concerned. One view locates Tarshish to the East, accessible from Solomon’s great seaport at Ezion Geber on the Red Sea. Since Javan and his family traveled north and west from Babel at the confusion of tongues, it seems unlikely. Large sea going vessels were often nicknamed “Ships of Tarshish” and more likely this is how Tarshish came to be linked with Ezion Geber, since both Solomon and Hezekiah built such vessels there.

Others see this as a reference to ancient Tartessus, a seaport in southern Spain, near Gibraltar. Still others recall the sea going navies of the Phoenicians, who operated Ships of Tarshish out of nearby Cadiz and sailed as far north as England for tin, a metal used in the making of bronze and other alloys, which they mined in Cornwall. Some believe that the name Britannia is actually derived from a Phoenician word meaning “source of tin.” If so, since the ships of Tarshish brought tin to the ancient world, this reference could be to Great Britain making the “lions” (KJV) or “villages”(NIV) of Tarshish Great Britain’s colonies, of which the US is most prominent today. The fact that the lion is a symbol of the British Empire lends support to this view.

Again, it’s instructive to view the common motivator as religion, not race. Some years ago, an editorial in the Jerusalem Post outlined the “Arab” plan as being composed of two phases. Phase one was to gain as much as possible through the inexpensive negotiating process while simultaneously weakening Israel and strengthening the Moslem coalition. Phase two, after no more negotiated gain can be made, is to go to war for the rest.

Understanding Gog and Magog (Part 7 of 7)

Understanding Gog and Magog (Part 7 of 7) By Nathan Jones In Part 1, we…

Understanding Gog and Magog (Part 6 of 7)

Understanding Gog and Magog (Part 6 of 7) By Nathan Jones In Part 1, we…

Understanding Gog and Magog (Part 5 of 7)

Understanding Gog and Magog (Part 5 of 7) By Nathan Jones In Part 1, we…

Understanding Gog and Magog (Part 4 of 7)

Understanding Gog and Magog (Part 4 of 7) By Nathan Jones In Part 1, we…

Understanding Gog and Magog (Part 3 of 7)

Understanding Gog and Magog (Part 3 of 7) By Nathan Jones In Part 1, we…

Understanding Gog and Magog (Part 2 of 7)

Understanding Gog and Magog (Part 2 of 7) By Nathan Jones In Part 1, we…