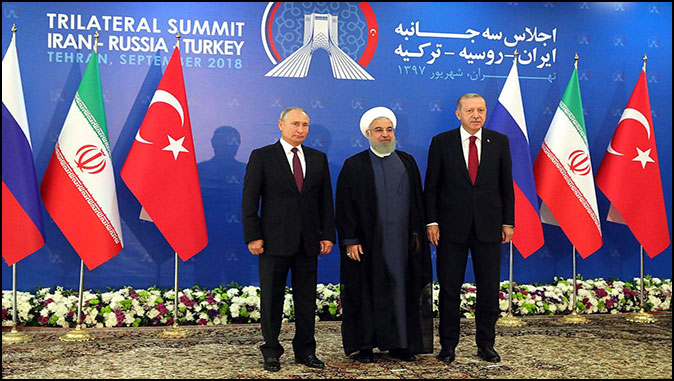 Achieving even a perceived state of peace in the Middle East seems to be the last remaining precondition to fulfilling Ezekiel 38-39 and so Egypt’s peace initiative bears close watching. To help gain the prophetic perspective, we began a review of those two chapters last week. Here’s part 2.

“‘This is what the Sovereign LORD says: On that day thoughts will come into your mind and you will devise an evil scheme. You will say, “I will invade a land of unwalled villages; I will attack a peaceful and unsuspecting people-all of them living without walls and without gates and bars. I will plunder and loot and turn my hand against the resettled ruins and the people gathered from the nations, rich in livestock and goods, living at the center of the land.” Sheba and Dedan and the merchants of Tarshish and all her villages will say to you, “Have you come to plunder? Have you gathered your hordes to loot, to carry off silver and gold, to take away livestock and goods and to seize much plunder?”‘ (Ezek. 38:10-13)

Israel is described here as a country at peace in the idiom of Ezekiel’s day, a land of unwalled villages, when this enemy coalition attacks, and other countries not mentioned before take notice. Sheba and Dedan are first mentioned as grandsons of Cush in Genesis 10:7. Later, in Genesis 25:3, we read of grandsons of Abraham named Sheba and Dedan as well, born to Jokshan, a son of Abraham and his 2nd wife, Keturah. From the passage it’s not clear which pair of grandsons is being referenced, but commentaries none-the-less identify these two as representing the nations of the Arabian Peninsula, notably Saudi Arabia. According to archaeologists W. F. Albright and Wendell Phillips, Sheba was on the southwestern edge of the Arabian Peninsula across the Red Sea from present-day Ethiopia. Sheba is known in history as Saba in Southern Arabia, the Sabaeans of classical geography, who carried on the trade in spices with the other peoples of the ancient world. Dedan was probably the habitat of the Arabs in the northern part of the Arabian Desert, which is modern-day Saudi Arabia. The ancient capital of Saudi Arabia is still called Dedan on many maps today.

Tarshish was a son of Javan, who settled the area of Southern Greece. Some see his name as a reference to ancient Tartessus, a seaport in southern Spain, near Gibraltar. Others recall the sea going navies of the Phoenicians who sailed “the Ships of Tarshish” out of nearby Cadiz as far north as England for tin, a metal used in the making of bronze and other alloys, which they mined in Cornwall. Some believe that the name Britannia is actually derived from a Phoenician word meaning “source of tin.” If so, since the ships of Tarshish brought tin to the ancient world, this reference could be to Great Britain making the “lions” (KJV) or “villages”(NIV) of Tarshish Great Britain’s colonies, of which the US is the most prominent today. The fact that the Lion is a symbol of the British Empire lends support to this view.

All that being said, the most provocative point here is that the very coalition of western nations that freed Kuwait and deposed Saddam Hussein are not engaged here, but instead question the invaders’ intentions from the sidelines. This is the main reason I don’t believe this battle is the Armageddon of Revelation fame. There are too many countries that aren’t involved, when according to Zechariah 14:2 all the nations of the world will be gathered for the final battle.

“Therefore, son of man, prophesy and say to Gog: ‘This is what the Sovereign LORD says: In that day, when my people Israel are living in safety, will you not take notice of it? You will come from your place in the far north, you and many nations with you, all of them riding on horses, a great horde, a mighty army. You will advance against my people Israel like a cloud that covers the land. In days to come, O Gog, I will bring you against my land, so that the nations may know me when I show myself holy through you before their eyes.” (Ezek. 38:14-16)

Here the Lord makes His intent unmistakably clear. He’s orchestrating this event to reveal Himself to the world once again. The years and years of debate over God’s existence, begun with the German School of Higher Criticism in the 1800’s and continued in the modern rationalism of the 1950’s will be put to naught as God uses this battle to poke His head through the fabric of the sky and shout, “I’m still here!”

“‘This is what the Sovereign LORD says: Are you not the one I spoke of in former days by my servants the prophets of Israel? At that time they prophesied for years that I would bring you against them. This is what will happen in that day: When Gog attacks the land of Israel, my hot anger will be aroused, declares the Sovereign LORD. In my zeal and fiery wrath I declare that at that time there shall be a great earthquake in the land of Israel. The fish of the sea, the birds of the air, the beasts of the field, every creature that moves along the ground, and all the people on the face of the earth will tremble at my presence. The mountains will be overturned, the cliffs will crumble and every wall will fall to the ground. I will summon a sword against Gog on all my mountains, declares the Sovereign LORD . Every man’s sword will be against his brother. I will execute judgment upon him with plague and bloodshed; I will pour down torrents of rain, hailstones and burning sulfur on him and on his troops and on the many nations with him. And so I will show my greatness and my holiness, and I will make myself known in the sight of many nations. Then they will know that I am the LORD.'” (Ezek. 38:17-23)

With signs reminiscent of all the Heaven fought wars of the past, the Lord is aroused in anger to execute judgment against the invaders of His land and enemies of His people. And as He has done before, He sews confusion in the hearts of Israel’s enemies so that they commence attacking themselves while He unleashes the classic tools of divine intervention. Earthquakes, plagues, bloodshed, rain, hailstones, and burning sulfur; these are His signature signs. Neither Israel, nor the enemy coalition, nor those watching from afar will fail to interpret them correctly.

So ends chapter 38. Next time we’ll see why some think this battle goes nuclear and get another good reason why it’s not the last battle of the Age of Man. See you then.

Thanks to the Biden Administration, Russia and Iran Are Closer than Ever

Thanks to the Biden Administration, Russia and Iran Are Closer than Ever By Majid Rafizadeh…